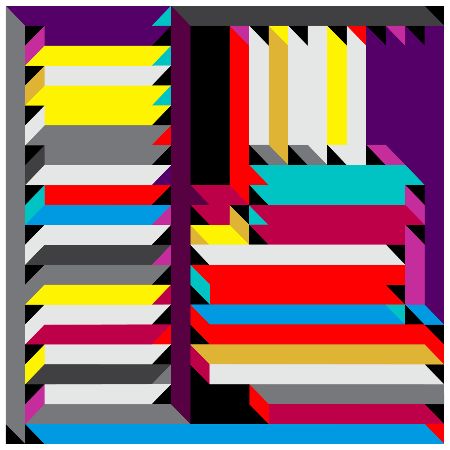 There is a moment in the, soon to be regarded as classic, animated film Captain Underpants where our two protagonists Harold and George opt in to eating a load of sugar which sends them sky high before they shiver and shake in the ugly truth of a brutal comedown. We’ve been there. We’ve felt that pull to get altered only to realise about 12 hours later that there is a price to pay. Why are we talking about sugar rushes and animated children films? Well it’s because Juice B Crypts feels like a direct aural representation of the mandy euphoria and much like that illicit thrill it also comes with a price. A feeling of being empty and with a tinge of regret. Was it fun? You bet it was but what comes next? What are we left with? Well not that much. Even the cover by Andrew Kuo feels like you are looking at the blurred reality of life walking the streets all twitching and chewing.

Juice B Crypts is Battles fourth album and sees the band now condensed to Ian Williams (Keys, Guitar, Electronics) and John Stanier (Drums) and it is the latter who we can really focus on when tapping in to what is really good about the album. Stanier’s drumming throughout is a masterclass of crisp rapid hits and complicated time signatures. When he flies, like on the title track and opener Ambulance, he really is breathtaking. Around him throughout the album you get the “Battles sound” which if you’ve been following them over the years you will instantly be familiar with and whilst that familiarity is not really an issue it can leave the album feeling like once you’ve heard the first few songs then do you really need to hear the rest?

There is no denying the complexities on Juice B Crypts and the musicianship that has gone in to creating it but it feels like a slight case of Emperor’s clothing which even the guest spots can’t really make up for. This is most apparent on Last Supper on Shasta Part 1 in which guest vocalist tUnE-yArDs sings “What’s that view like up in the sky? Is there a cloud stuck in your eye? High above the suffering folk / Taking a sip, having a smoke” which sounds like something Noel “Space Cowbow 2019” Gallagher would sing. Maybe you could have got away with that  back in the 60s on a psych record but in 2019? Another weak use of a guest is on They Played it Twice (featuring Xenia Rubinos) which sounds like a New York spin on that strand of mainstream Drum and Bass that was popular in the 00’s…you know the stuff they would use on soft drink adverts or for some “edgy” footwear brand. Not all guest spots feel disposable though with the always reliable Shabazz Palaces adding their talents to Izm which is a high point on the album as it manages to strut and bounce and grab you from start to finish.

Juice B Crypts is a perfectly ok album. It is certainly colourful and relentless and if you are a fan of the band you will definitely find plenty to enjoy but for the curious or the casual it may just leave you feeling slightly cold and regretful.