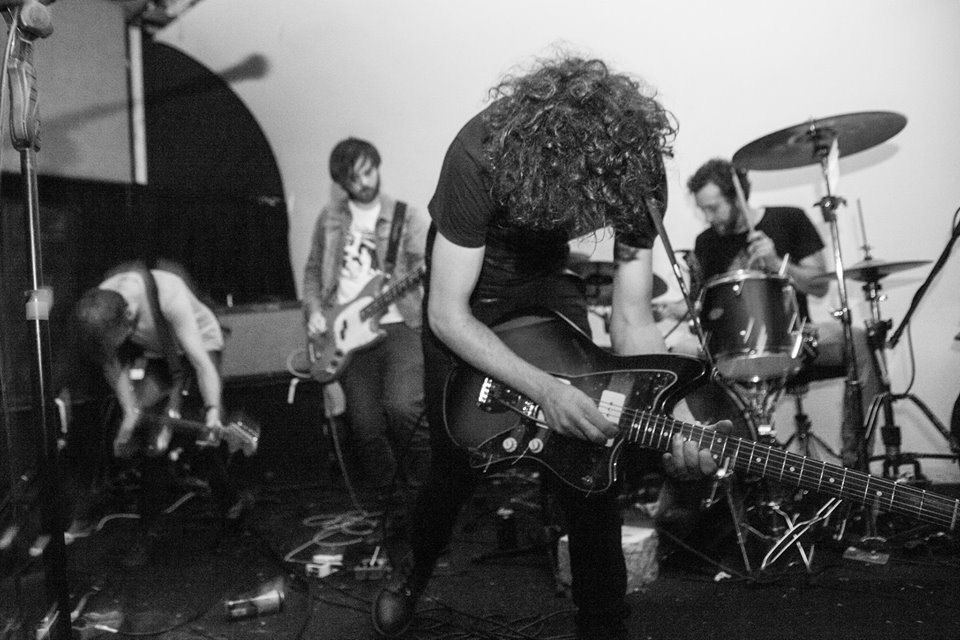 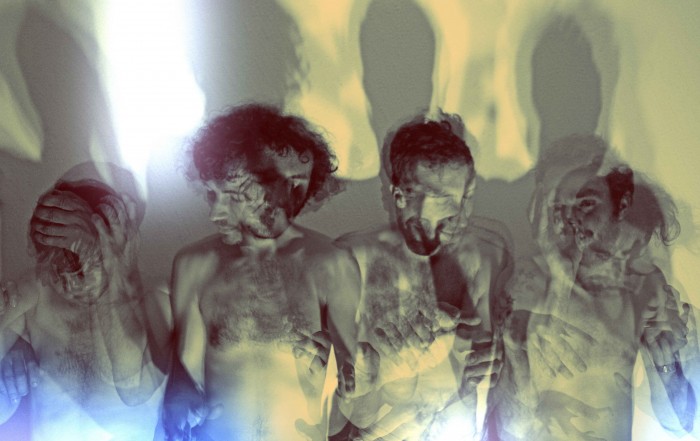 Ahead of their headline slot on Saturday at the New Year/New Noise 3 show, record label Howling Owl’s takeover of the Arnolfini Art Gallery, I got together with Spectres lead singer and guitarist, Joe Hatt and guitarist, Adrian Dutt to chat about their eventful year in the wake of the release of their debut album, ‘Dying’ last February, their ‘Spectre’ campaign and their upcoming remix album, ‘Dead’ as well as music and the art of noise.

On a cold Saturday morning, I meet the guys outside Bristol’s Arnolfini. They are just about to go off to take polaroids of a prosthetic limb placed around the locale to add to their Christmas single package, a cover of Paul McCartney’s ‘Wonderful Christmas Time’. We sit down at a wooden table at the lip of the harbour where the art gallery lies and begin chatting about Louderthanwar’s past coverage of the band. They were last interviewed just under a year ago by our writer, Ben Tansey which can be found here and were given a “lukewarm” album review by myself, read here.

Firstly, I apologise for the review but it seems to be water of a ducks. A reaction that calms my nerves and warms me to their good nature. It seems any reaction to their music is a good reaction to them. Good, bad or violent as long as their music shakes things up a bit it’s okay with them. Their live shows have been known to descend into confrontation and as Adrian is quick to say, “Essentially we are a ‘live’ band and it was always going to be difficult to record it because you lose some context.”

Joe expands, “Songs like, ‘This Purgatory’ especially the middle bit are quiet sinister and nice sounding, whereas live, when we’re going for it is actually really horrific. I never really sing in practice and I can’t hear myself when we play live so it’s a lot more aggressive than on record. Everything tones down a little bit. Dom ( Producer of ‘Dying’ Dominic Mitchison) who recorded it captured it the best he could a Malthouse Studios. When we recorded it, they had only been going about six months so they were still getting their sound right, so if we recorded it now it would sound different because they know the room better and got more stuff. He recorded us when we did our Hunger E.P. three years ago. He just recorded us in someone’s bedroom and managed to get it sounding really good.”

LTW: What are expectations for the upcoming New Year/ New Noise 3 show at the Arnolfini?

Adrian: “The show is called ‘Spectres play ‘Dead’ and it’s sort of a new show. In March we have another album coming out and it’s a version of our album. We got contemporaries and peers we really like to re-invent our songs, so we have Hookworms, Ride, Death In Vegas, essentially remixes. What we wanted to do in this show was re-invent our show, so we’re playing some of those songs. They’ve re-done our song and we are going to play it like that. There’s lots of different instruments and different instrumentation, completely new arrangements. It’s just to kill the album I guess.”

Joe: “That’s the initial thing, the new record is called ‘Dead’ because of course that is a play on ‘Dying’. We don’t play Bristol that often and each time we end up doing something really elaborate. The last one we did was a secret show in a safe store unit, in Southville in a lock-up storage cabinet…”

Just at that moment, the murky sky starts to spit itself over us, so we move inside to the Arnolfini café to further our talk over an orange juice.

Joe: “When we’re in Bristol, we feel we should test ourselves and many people haven’t actually seen the kind of set when we tour, we feel we should make more of an effort. So, this gig will be playing two or three of the tracks that have been remixed by other people and a couple of new songs as well. We won’t tour that because it would be just too much work and we’ve been playing these songs for two or three years before the album came out and it’s for our own mental state. It good to keep things interesting so we don’t get bored. Because the ‘Dead’ album is coming out and the names on the re-edits it might bring a new audience in. So, it will keep expanding and more people getting into the album through it.”

LTW: So, are you taking over the whole building?

Joe: “Yeah, pretty much. We got the dark studio upstairs on the Friday where electronic artists, John Bence (Beat-less choral cut-ups and minimalistic cello) and Kayla Painter ( AV immersive with slow ambient trip of synths and bells, incorporating percussive elements) will be playing which is the opening event. Then there’s the gig on the Saturday night and on Sunday, we have someone doing a field recording workshop. He’s going to meet people here and do some recordings around area and come back in and play around with it. And we are doing a talk with Sonic Cathedral discussing what we did in 2015 in terms of campaigns.”

Joe: “It’s more performance art, last year we had the Rummage Orchestra which is five or six people lined up with plastic tubs and load of metal, rubber and plastic and then they are literally rummaging creating this… well, it’s orchestral really, creating this weird energy. This year we have CHAMP who this art collective who study at Spike Island, they pop up in random places and do unannounced things. I like the way they carry themselves, I saw them do a few things at Supernormal. This could easily be a gig in a gallery so I thought to get local artists we know to do some stuff, they don’t really need to tell us what they are going to do. We want to give them free reign. It’s a way of using art to shock people who normally go the rock gigs, just to have something different. We’re not saying we are curating this amazing contemporary art piece, it’s more blurring the worlds of art and music and seeing what happens really.”

LTW: So, who are the other bands playing on Saturday?

Joe: “Over the last few year, we’ve tried to get a good cross-section of bands that still fits in with what Howling Owl is and our ethos. I think this year is as strong as ever really, I’ve only seen Blood Music do a ten minute set in Playpen at Supernormal. It’s just a drummer but then he syncs it up to a drum machine and makes this really brutal techno with his Japanese style of drumming, It’s so intense. Rhain is a pianist and singer who is, compared the rest of the night is going to be toned down but she has absolutely beautiful voice and really heart-breaking songs. Crononautz are two piece noise techno, all live hardware, like Giant Swan almost, and Repo man are sort of post–punk with a saxophone, so it’s a real good cross-section of stuff.”