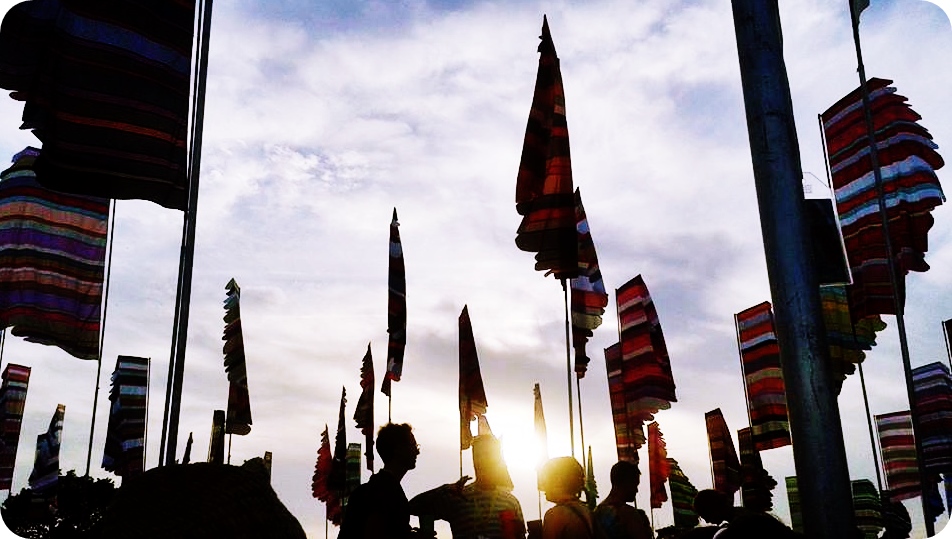 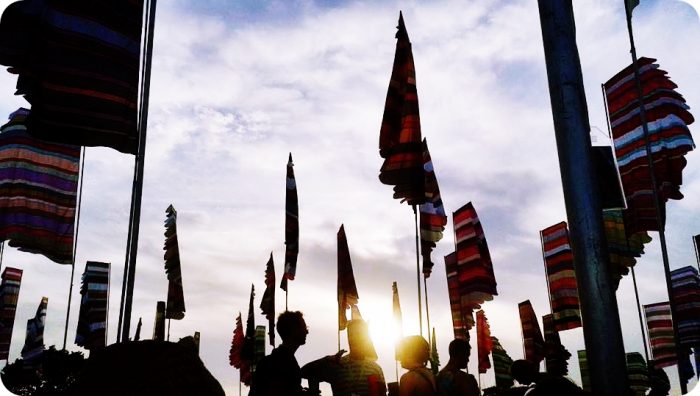 John Robb has already penned a couple of articles on this years Glastonbury Festival. Here are the thoughts of Keith Goldhanger, now with a thirty year attendance record behind him.

Glastonbury still has it.

Whilst considering a big moan on the eve of the event this year directed towards the omission of one or two of our current favourites such as Idles, The Rhythm Method or Francobollo to name just three, a quick glance through the schedule is enough to remind us that there are a lot of bands here this year we’ve expected and waited patiently for over the past couple of years to see play.

We waited and hoped that one day they’d get the chance to turn up here and be responsible for one or two of us to lose our shit without losing our friends and family who are either standing alongside us ignoring our unruly behaviour towards what we’re witnessing this weekend or standing over in another field waving their arms around themselves to acts they feel they may never get the chance to see again.

Partaking in this activity here in Somerset is probably a lot better than to behave like this down The Dalston Victoria on a wet Tuesday night.

Some of us often hold back our enthusiasm back home.

It helps us to blend in a little.

It’s not just the name on the poster that give some of our favourite bands the prestigious bragging rights of attending either. Some acts we are drawn towards (because in one or two cases we feel we need to share this experience) are pulling massive crowds that know the tunes and must provide those on the high stages the buzz of their lives.

Izzy Baxter, frontwoman of Black Honey is on the verge of tears as she tells us they never wanted to visit this place unless they were playing and here they are, in front of thousands doing what we suggested may be a good idea a couple of years ago.

Nadine Shah, who for some of us has gone from playing a piano in a tiny room in Camden to where she is now.  There’s a third album on the way and a Shepherd’s Bush Empire headline show before the end of Autumn.  Nadine now has a totally different line up of musicians behind her and a collection of cracking new tunes that we imagine we’ll see again and again at this event.

She’s angrier than before. She dances. It’s all a bit more serious. The tunes are reminding us more of Transglobal Underground than Bauhaus and the subject mater is even darker because it’s more political (She Drew The Gun would be a great act to listen to also as a comparison). We get a few tears being held back during this performance on the Left Field Stage and yet again, a big crowd, one that has hung around after witnessing South London’s finest Shame and will remain for Manchester’s Cabbage who also play in front of thousands in the John Peel tent a day or two later telling us if they see us all disappear to go and see Jeremy Corbyn, speaking on the Pyramid stage during their set then they may simply down tools and follow us up the hill. 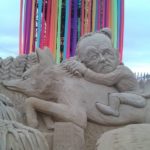 If the sporadic chanting of ‘Oh Jeremy Corbyn’ along to the tune of Seven Nation Army (and the best version of this was in the Silent Disco one night) achieved anything this year it was hearing the occasional grunt of disapproval from one or two people in the vicinity. Yes, there were a few Tory voters here this weekend, tutting away whilst unable to hide their political allegiance and saying things such as they ‘haven’t come hear this year to talk politics’ which is bollocks because this is precisely where one or two of us will sit and listen to people explain their reasons for why they voted for a party that was the least likely to get this country out of the mess it’s in at the moment. As long as it’s coherent and precise and not full of bullshit lies taken from the publications who don’t deserve a mention here, we’ll listen.

Will we ever get a ‘Right Field’ stage at Glastonbury? Would anyone go near it if it existed (who would play)? And would anyone learn anything of value if it did exist?  Probably no on all accounts seeing as though the only people interested wouldn’t be able to justify their opinions without pointing accusing fingers and going neh neh neh neeeh neeeeer! at the opposition, blowing raspberries interspersed with occasional disappearing acts due to any speaker pissing off every hour to find a corn field to run around in thus not getting around to answering any questions thrown their way or being reminded that they’re quoting ‘facts’ that have since been proved as untrue.

Jeremy Corbyn’s speech on Saturday afternoon was pretty much the same as Napalm Death’s inter-song banter Thursday night but without the swearing. The West Midlands legends played to hundreds, Extreme Noise Terror played in a tiny train carriage. How did that happen and what did the latter have to say we wonder when they saw the two contrasting venues in the same area of the site? If John Peel was still around these two bands would have played on his stage, not tucked away in a corner on a Thursday night.

Everything Everything played in a tent that we couldn’t get in to. The Killers played in a field we couldn’t get in to (even though we were camped there). Liam Gallagher had to be viewed from the old railway line, practically in another field to see. The brilliant XX played the main stage, which was the wrong stage at the wrong time as the audience stood around fidgeting ready for the mighty Radiohead who messed with our minds and made us cry. Foo Fighters gave us a run of the mill rock show that included big tunes, a lot of pissing around that included drum solos, guitar solos, an obligatory Queen cover version and an almighty firework display. 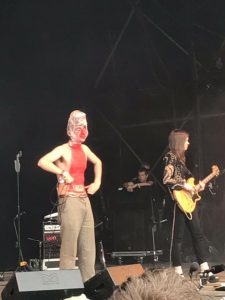 Saturday lunchtime. Despite this man covering his head in cling film and painting half his body red he did manage a top quality performance that was briefly interrupted by presenting us with his breakfast in a vile show of vomiting that made us feel he should possibly have gone to bed sometime during the week leading up to the event and not been smoking whatever it was in the hand not hanging onto the microphone. Moonlandingz sound like a mash up of The Glitter band, Madness and even Primal Scream at times and the shared vocals with Rebecca Taylor who we remember from Slow Club is faultless. He did manage to keep his genitals inside his trousers this year we noted (something he failed to achieve in 2016 with the other great band he fronts, Fat White Family).

It was hot and rained for about half an hour. At least one of us showered that day, or felt they had.

We saw Thurston Moore again. We saw Pictish Trail again. Lord Buckethead introduced us to the Sleaford Mods. Shall we mention the weather again? – Blazing. The food was better than we get at home (even though one of us still went on a four mile trek because he ‘fancied a packet of crisps’) and the Ale worth grabbing whenever there wasn’t a queue at any of the hundreds of bars spread evenly around the site that seemed to be conveniently serving us any time during the day or night.

The opposite of Shame playing to more people than we remember them playing to at The Brixton Windmill was surely watching Craig David in a small bar up at the Park Stage. He wasn’t mind blowing good by any means and as much as we’d love to give a glowing report seeing as though he’d earlier played the main stage, we won’t go and see him again it’s imagined. Craig David – Rubbish (Louder Than War) – this can go on the posters in the tube stations if anyone would like to use it.

Fujiya & Miyagi made us dance, as did Confidence Man and whatever it was going on all night in Block 9, Shangri-La and Arcadia. Glastonbury is the best place in the world to go clubbing. Half an hour in each nook and cranny could keep you going all week for us with short attention spans and a love for all things Dub step/Techno/Drum & Bass or Disco that we can’t find the time or inclination to commit to back home as much as we used to. 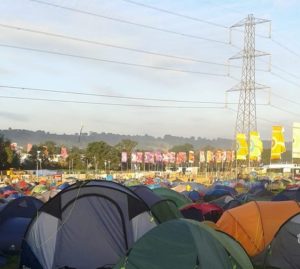 Some of us learnt that we may never really get around to listening to or understanding bands such as Boy Better Know, Kano, Stormzy, Sampha  or Jamie Cullum. There’s loads of bands around today that we have no idea about.

One of us expects the earlier mentioned Confidence Man to be one of the hits of 2019 but what will we do this time next year? We could do with the festival being on next year more than any other year. Some of us need the assurance that the world is not really full of idiots and Glastonbury does appear (and always has) to attract the nicer people in this world regardless of the odd silent Tory or the odd person responsible for the paper cup or gazebo being discarded on the floor for someone else to pick up.

We’ll have to work a bit more on all that but we’ll do it with a pretty encouraging soundtrack that’s coming together in the UK at the present time.

Even if it does include a White Stripes tune every now and then.

Brilliant weekend, as it is always.