Strap yourselves in folks, Keith Goldhanger has been standing in a big dark shed for ten hours, complaining about the cost of the beer, the food and some of the bands.

He won’t admit it but we think he actually loves this type of thing.

What’s the betting that in a year’s time some of these bands are going to be so popular that someone will point an accusing finger at me and remind me how shit I thought they were once?

Happens all too often.

It proves I’m not in charge and that I don’t know anything.

Go ahead then rubbish Indie bands, show everyone how great you are and prove me wrong.

There’s some kind of perverse pleasure in that happening as it means I can’t be accused of going giddy about everything I watch that makes a noise.

That would be a bit shit wouldn’t it?

Ten bands for twenty quid, away from the hustle and bustle of whatever else is going on in London today and time to have a look at bands we’ve heard a bit on the radio, seen briefly before and get the feeling that they’re all on their way further up the ladder of variety performance than they were a year or two ago. Bands on the ascendancy if you like.

Waiting for their turn on the Park Stage at Glastonbury, The Peel Stage or whatever the second stage is called at Reading and Leeds during the next August Bank Holiday.

We’ll start with JUICE and mention how ordinary they seem and notice they rhyme “Tease” with “Please” and “Easy” whilst elongating each vowel in each word.

We then erroneously punch someone’s expensive beer over instead of the air as we sing along to ASYLUMS
who surely must be one of the most fierce, energetic, exciting bands we have around town at the moment. Not only that but a handful of short sharp tunes that cram catchy verses around catchy choruses that people will soon be digesting fully before forgetting to stand still to watch this foursomes’ spectacle and start losing their own shit themselves. There’s a tsunami of a mosh pit coming towards this band soon. They may not realise this yet but once we get in a room with an audience who will start behaving as mad as the band on stage then events such as this may need more than a barrier and a couple of burly security guards to attempt to keep order (more on that subject  to come).

THE ORIELLS arrived and left before we could pin point anything to get extremely excited about except over hearing the expression “Indie schmindie” and almost getting into a fight about whether that word would be allowable in scrabble or if we should now use the 2016 expression “Indie landfill” to describe such entertainment?

YONAKA  came across like an ….I’ll leave it there – not our cup of tea, too much arm waving like Kate Bush going on distracting from a Siouxie Sioux sounding voice and extracts from the 4 page criticism originally drafted I’ll save up to show you all once it doesn’t matter anymore (maybe- We’re listening to their stuff and can’t get that bloody  Ignorance song out of our heads at the moment). THE AMAZONS have all the credentials for getting a crowd on their side, chanting choruses, rock riffs, big endings and leather jackets. As for the tunes, we’ll get back to you all another day on this if they’re any good as we couldn’t really decipher what was really going on amongst all the reverb this room seems to provide.

THE JAR FAMILY, men with hats and waist jackets (they call it steampunk in the south nowadays), bongos, a tambourine a mouthorgan and a few not at all indie tunes that are a slightly refreshing change to what we’re used to but simply get us discussing whether we’d hang around to watch these if we passed them in a field (performing at a festival that is, not lying unconscious in a ditch) or move on briskly to watch some jugglers.

The first sign we saw that this band are going to be getting the crowd moving was evident when their latest tune “Feeling Better” (Sounds like a bouncier, slowed down version of The Manic’s “Design For Life”) was played earlier and you could see the joy in the early arrivals as they casually sang along. Now it’s the real thing and as hoards of people dance wave their arms in the air and sing along to these happy tunes we’re suddenly distracted by people being ejected (were they allowed back in?) for simply dancing and being as animated as a student at a Housemartins concert. In a week where hashtag “Indie Amnesty” failed to bore any of us we can see now that there’ll be two or three people confessing to having once been thrown out of a Magic Gang gig (#indieamnesty). Us punters less light on our feet stood bemused as to what this nonsense was about. The happiest jolliest band of the day causing this amount of mayhem left a few of us puzzled. The Magic Gang will be a must see band once they begin turning up on hot summer afternoons at the festivals and we seem to think they’ve a few dance floor indie feet shufflers in their repertoire that may not be avoidable in a few months’ time.

KAGOULE hit us with their crunching guitar riffs and US sounding alt rock that unfortunately get a little lost amongst some of the heavy reverb we’re still struggling to get used to in this room.  “Made of Concrete “and “Glue” are still fab tunes regardless.

BLACK HONEY seem to have someone of the sound desk who manages to get the sound right as well as one of the best front woman (Izzy Baxter) we’ve seen for a while who tends to lose her shit for the duration of each song, gets the audience to sit down, wave their arms in the air and be generally enthusiastic enough to keep us watching whilst throwing out their tunes. At least one of these is a potential James Bond theme tune we’re hearing and after a third view now I bloody hope they play in a field we plan on standing in ourselves sometime this summer. 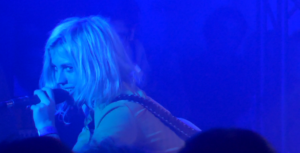 It takes them 20 seconds from leaving the stage to parking themselves onto their merch’ and staying there chatting for the best part of an hour. No puffing or panting, no beer to refresh them from what they’ve been achieving just pure enthusiasm that will certainly continue to help them make more friends as they progress.

And progress they will.

They’ve only been doing this lark for a couple of years as well apparently.

Finally SWIM DEEP who re- introduce us to the sound of something that’s not a guitar and play us songs that remind as least one of us of all those hugely underrated pop songs that Wire wrote about thirty years ago with the odd falsetto vocal thrown in. They’re also a bit baggy and dreamy and leave us wanting to investigate a bit more as we conclude we’ll be dancing in the rain to these one day holding onto our soggy fags, with wet feet and having completely forgotten all the other bands we’ve just stood for two minutes watching before walking away as we go in search of something good to watch.

This gig was arranged by Flying Vinyl – a mail order record club doing good stuff with some great bands that will no doubt be throwing out records in our direction for a while we imagine.

Some of it sounds very plain and ordinary, a lot of it sounds ace. Every band seemed to have pockets of people watching and dancing who were there for them.

An event such as this will get at least one of us monitoring these acts as we stroll through the mud during summer to decide whether these tunes really are the soundtrack to our year or maybe we’ll be scratching our heads soon asking ourselves if these songs are just radio airtime fillers that sound track our breakfast but not necessarily what we will eventually be listening to after our bedtimes.

We’ve witnessed today a current crop of bands already visiting every nook and cranny in the UK and we’ll come back to those who we nonchalantly dismissed today when we realise we’re probably wrong (again).

Despite not enjoying everything there was on offer this event is one at least one of us will be eyeing out again if it becomes an annual event.

We’ll now open our laptops, log onto Soundcloud and delve into what these bands have done to get this far and what makes a majority of people in attendance lose their shit sporadically throughout the day.

And then buy a record player.

All words and pictures by Keith Goldhanger.