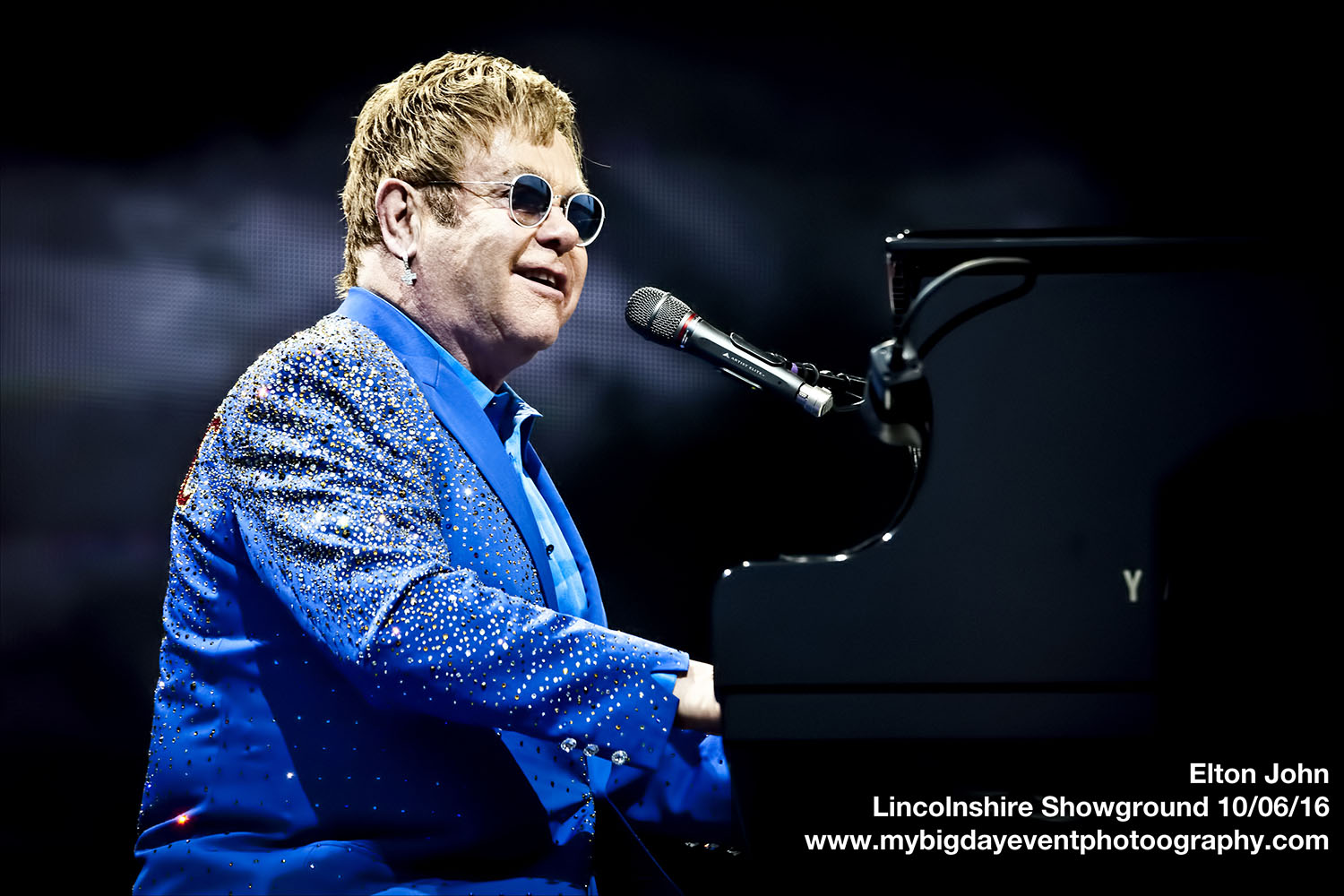 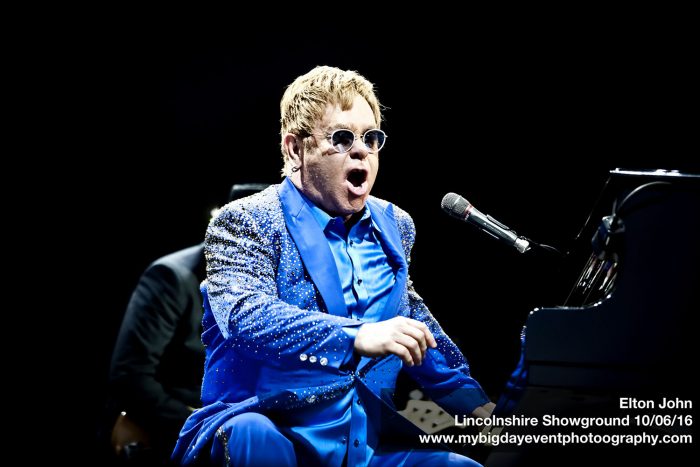 The Lincolnshire Showground (quite near Lincoln)

It’s not often a bona fide megastar comes to play Lincolnshire. They’re happy to eat our beef and potatoes and sausages but they seldom stray into the county itself, so the visit of Elton John to a purpose built twenty thousand seat arena at The Lincolnshire Showground is more than just a gig, more than a show, it’s an event, a happening. We’re not just pleased that Elton has chosen to visit, we’re proud. If you’re reading this in London, Birmingham or Manchester you might not get this – you have stars near you every day – but for us yellerbellies seeing a big name usually requires at least a 150 mile round trip – and sometimes, to be honest, we feel a bit left out. (We’ve got Jess Glynne at Market Rasen Racecourse in August – and that’s a big deal too.) 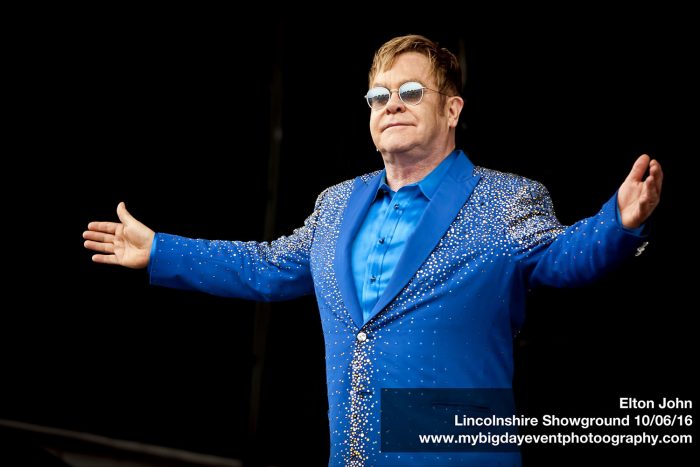 To his credit Elton seems to get it.

“We’ve worked out that the last time I played in Lincolnshire was in 1972 when I appeared at the Boston Gliderdrome”, he announces early on and even if he got someone in his entourage to look it up it doesn’t matter. It’s a nice gesture that he took the trouble to mention it at all and it sets the tone for an evening when the music is allowed to do most of the talking (which it does very eloquently) and Elton charms a capacity crowd with occasional displays of wit, humour and general niceness. It’s a night when we all feel warm and gooey inside. Lincolnshire feels loved.

For the record, Boston Gliderdrome, now long passed into history, was one of the top venues on the east coast at one time and is rumoured to have provided the inspiration for Saturday Night’s Alright For Fighting.

In fact this is much less undiscovered country for Elton that one might think because Bernie Taupin used to live in a nearby village (still does for all I know) and Elton would often visit him there back in the day.

“Is there anyone here from Owmby-by-Spital?” he asks the crowd and judging by the number of hands that go up it looks like seventy five percent of the village is in attendance. For some of the songs on the setlist tonight this is a kind of homecoming. 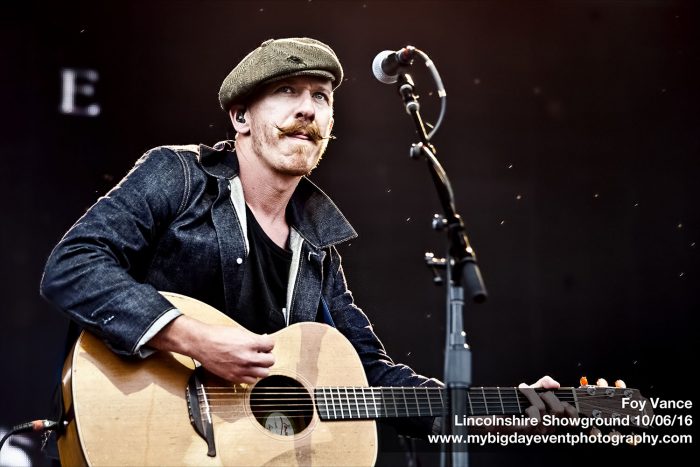 Support comes from Foy Vance. He gets to play in the rain to an arena full of gleaming pacamacs. (Remember them?) Judging by the damp and bewildered faces in the audience when he comes on stage he doesn’t have many fans present. When he leaves he has thousands. And it’s still raining. Nobody cares.

Vance has curly moustaches and a large flat cap which combine to give him a look of Salvador Dali going to a fancy dress party as the young Gilbert O’Sullivan. He sounds like a mix of Van Morrison and the man of the evening, Sir Elton himself. He’s been reviewed twice for Louder Than War recently, for his new album The Wild Swan by Alan Ewart and at Hoxton in May by Paul Grace, so I’m going to direct you there if you want to know more. Suffice it to say that he’s a first rate live performer and you should go and see him if he’s ever up your way. She Burns is a highlight, soulful and sinuous, it’s a song that twists and turns, that develops a real tension that keeps you hanging on to the vocal and the closing Purple Rain is a nice touch which gets everybody singing along. Fine stuff from a man who knows how win a crowd over.

Elton takes the stage in light drizzle and a blue suit with so many rhinestones on it that as he moves he shimmers as though he’s being beamed up to a passing spaceship. There’s a definite party atmosphere, plenty of big spectacles, masks and costumes. If I was a good photographer I’d have filled a memory card with fancy dress. I wish I had, but I didn’t. Why not? Because it’s Elton John dammit and I’m feeling a bit overawed. People are up and dancing almost immediately and the security have a light touch, (as far as I can tell), so that there are no scenes like the Leicester the next night when the star of the show lost his temper at overzealous marshals attempting to stop people dancing. Find it on YouTube, it’s great. Hats off to Elton. 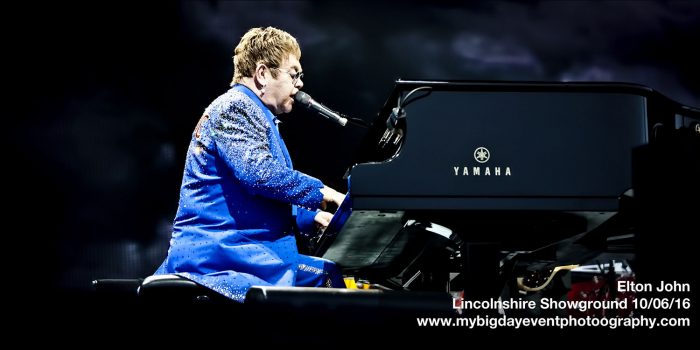 The set opens with the instrumental/vocal combo of Funeral For A Friend/Love Lies Bleeding. Over the years I’ve heard so much about Elton’s nodules and health issues I’m sort of expecting his voice to be a shadow of its former self but when the Funeral has passed and he starts singing any fears on that score are comprehensively allayed. If his voice is any less good than it was in twenty or thirty years ago then to be honest I can’t tell. Put simply he sounds bloody marvellous and he keeps sounding bloody marvellous for over two hours, playing a twenty four song set that takes in plenty of classics and crowd pleasers plus a fair smattering of more obscure tracks and covers almost the full range of his career from the 1972 Elton John album to this year’s Crazy Wonderful Night. The band are, of course, immaculate, what else would you expect?

Possibly the biggest surprise, and almost the only disappointment of the night is that this most recent album, which is one of his best of recent years, contributes only three songs and we miss out on the title track which also supplies the name of the tour. I’d gladly have traded a couple of hits for some of the newer stuff, although I’d also have like Passengers which would probably make me a pariah among hard core Eltonistas.

As the set progresses and the drizzle intensifies my notes disintegrate until they resemble a handful of porridge and I give up and decide to do the review from memory and with the help of setlist.com. That’s not without problems – did he really do My Song? – if so I must have been unconscious somewhere because I have no recollection of it at all.

But I do remember is genuinely bluesy Guess That’s Why They Call It The Blues, a breakneck raggy Bennie And The Jets, a lovely Daniel and a restrained Candle In The Wind that took the song back to its original feel, much more moving than later embellishments had left it. Somehow the song still manages to surprise with its sweetness and unsentimentally. 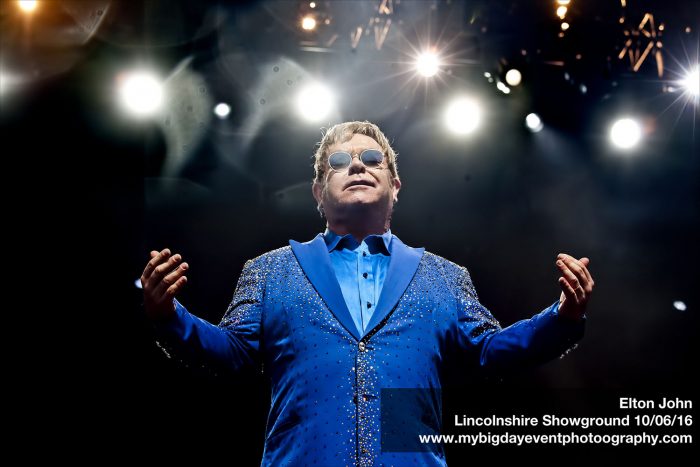 It’s such a great setlist I’m not going to even try to mention every song but I do notice that at the start of some of the big songs, the crowd, who I am expecting to go wild, instead fall still and strangely silent. Goodbye Yellow Brick Road is one such number, played to an ecclesiastical hush that tells you something about how much these songs mean to people. (Springsteen fans will recognise the same feeling at the opening piano lines of Born To Run.) The presence of less well known tunes, like Levon from Madman Across The Water and Burn Down The Mission from Tumbleweed Connection allows Elton to let rip a little. People may know and like these songs but they don’t greet them with the same spellbound awe.

Two hours after it all begins we’re struggling to get out of the car parks and people are trudging around our cars, still singing. It’s been one of those nights when the great British public showed that we can rise above mere rain, especially when we’ve got as good a reason to do so as this.

Now it’s time to get ready for Jess Glynne, and if by chance any music megastars, or their people, chance to read this, it would be very nice if you can to visit once in a while. We’d really appreciate it – and the sausages are excellent.