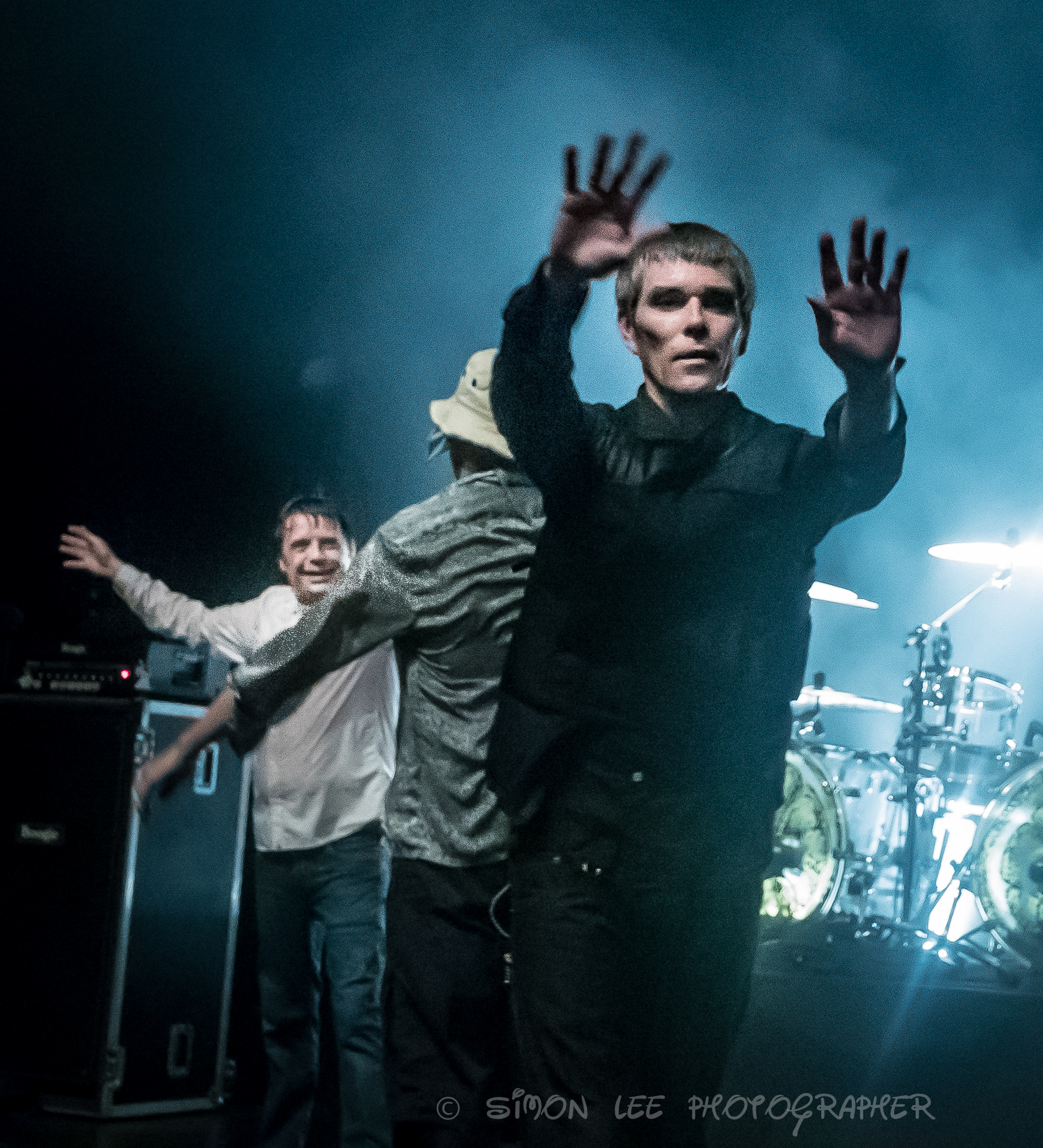 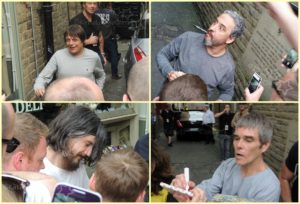 This is a live written review so there will be typos!

A stone Roses gig in Manchester is more than a gig.

Selling more tickets than last time it seems that this bands most idiosyncratic career runs to its own rules and its own fuel. The band that thrives and feeds on chaos and beauty like the Sex Pistols once did don’t play by any boring rules returning to play every few years just when everyone thought they had disappeared over the horizon.

Surviving on whispers and rumours the Roses return like Robin Hood and his merry minstrels armed with 2 albums and a smattering of singles that pepper the lives of a mass audience. It could be as simple as the timelss brilliance of the debut album or the underrated great second album combined with their folk hero status that makes the band so loved.

It could also be their attitude and their mystique that keeps them fresh. Recent twitches into action saw the two singles from the much argued about All For One a release that made national news and the sinuous groove of the freshly released Beautiful Thing raise more questions than answers – will there be an album?

Of course it’s the Roses gig but the rest of the bill is way over par.

Blossoms open the gig to a strong crowd reaction. Several thousand have got there early despite it being a Wednesday – the least rock roll day of the week. Stadium gigs can be odd but maybe it’s the steep tiers of seats that are great for today’s live sound. Blossoms have taken the psyche pop revolution of the last few years and moulded it into a perfect, layered quicksilver indie sound that is sculptored perfectly and has the audience in its spell despite the grey Manchester mid summer afternoon air. Their crystalline melodies are a perfect balance to their earlier shocks of psyche pop and their newer stadium Indie shots are the sound of youthful summers to come and pop optimism.

Chronixx bring their reggae crossed with the industrial techno of the Prodigy that works perfectly. The band hark back to to the international 2 days – the eighties Manchester club where the Roses used to rehearse that used to have all these great reggae nights on. The young reggae colts deal a Bob Marley flavoured set even quoting and the great man on song garnering a singalong from the crowd.

Time to crank the gear?

Then bring on the apocalyptic knights of hip hop – the true originals and one of the greatest bands of all time.

Astonishing and timeless public Enemy’s slabs of industrial hip hop noise and slivers of great pop moments dropped into the mix like like smells like team spirit and seven nation army cut though the air like a high decibel revolution and an exercise in pop culture nous.

21st century public Enemy are something else. Longevity suits this most unique of bands who like all great groups and collectives transcend genre and time . Chuck D is still the rhyme authority and is still the preacherman figure with his poweful voice of thunder telling it how it still is, decked out in army fatigues the band are on manoeuvre as the security of the first world shuffle and Flavour Fav is still the perfect foil.

Before the gig I bump into a casual Reni in the manchester city centre street who tells me that Public Enemy were chosen by him abd ian brown because they were hits simply the best band of the eighties.

Public enemy’s message is more important than ever and they say it loud and clear tohuge cheers laying out the anti racist and anti divide message with a power and poetry.

The stone roses could easily have sold this out on their own but have gone way above par with the bill – a multi flavoured list of bands that are straight from the band’s own record colections and give hints to the roses own musical engine room that always made them far more than your average indie animal.

And so to the main course.

I wanna be adored is the generational rumble that gets its customers singalong bass line welcome
e . it’s hard to believe that the song is now 31 years old as it still feels fresh and new with the ever enveloping comforting rush that has always set the stall for the band even though it once sat in the middle of the set – which feels bizarre now for one of rocks great openers.

Elephant stone is pitch perfect and somehow packs the angelic magic of the original version . Mani is in all Mod white, Reni in his yellow and top ian brown in designer denim whilst Jon squire is
Hidden by hair and beard.

Age kinda suits the band – the grey hairs, the toughened up skin is worn with pride, we always used to joke that they would have to reform before they didn’t look like themselves anymore and somehow these older bones suit their timeless songs.

Sally cinnamon is one of those songs that soundtracked the youthful days of freedom with that perfect blend of churning guitar white out of rock and the shimmering psychedelic of white dove indie. Songs like this are part of the U.K. soundscape – the music to the first snog, the first pill, the
first proper clothes.

Mersey Paradise crystal one beaity always makes me think of the Mersey wending its way through Didsbury near the bohemian flats of the mid eighties post punk manchester that we and the Roses used to neighbour. Sugar Spun Sister still drips lysergic melody and Reni’s effortless grooving drums. Bye bye badman is still lighter on its feet than prime time Muhammed Ali- live, that almost gothic psyche of the glowering spectral intro as it then unfolds into the skipping and churning outro. Its still so perfect. Somehow the Roses make it all feel so effortless. Ian Brown’s voice sounds good but does that kind of stuff matter? All the great punk generation singers deliver the words in their own voice – rotten, strummer – the whole gang delivered from the gut ‘ain’t been to no music school ‘ as someone once sang and the truth is the voice is perfect for the songs and echoes around the arena as MANCHESTER celebrates its soul.
Where Angels Play gets a rare outing.
There is a great segue into Shoot You Down that sees its lightly jazzy shuffle and breakdowns lend themselves perfectly to a haunting stadium singalong . Begging You is a revalation and sounds massive and better than the album – John Squire makes it sound like he is playing the guitar backwards – his playing is on fire tonight- did he really not play guitar in all those years off?

Waterfall’s churning guitar arpeggios get everyone dancing like its 1989, it has a perfect tension and release and that quixotic guitar line that is so hypnotic. The outro is heavenly – all groove and raga guitar chiming into the damp night air- it’s like a terrace anthem with no words – the reaction is like an old friend getting embraced and it’s these drawn out grooves that the band are so brilliant at. They could play this part of the song for three hours and everyone would still be entranced. And Mani’s neo McCartney bass is blissful.

Elizabeth My Dear pulls no punches despite the monarch’s 90th. fools Gold is the ultimate in shuffling Manc loose limbed funk and a perfect showcase for the wah guitar of John Squire – locking in tight with Reni’s rolling groove- great they have returned to that with Beautiful Thing- the question is now will they play the new single after Fools Gold?

fools gold has another one of those never ending outros that sees the rhythm section locked tight and john Squire showcasing his catalogue of tricks – it’s mesmerising stuff. The song ends on a neat nod to the mighty Motorhead.

All For One gets a massive reaction- for all the Facebook bickering about the song it sees a mass singalong and sounds bigger and more rousing than the single version. It’s difficult to believe how much everyone bitched about Love Spreads when it was released – these days it’s welcomed like an old friend. That zig zag wander riff had jimmy Page thrilled when I met him and the song sounds width taft dark and huge tonight.

Made Of Stone is massive – the concrete in the stadium shudders with thousands of dancing feet and that most perfect of choruses is sung back at the band louder than the huge PA and I can swear I can feel the massed warmth breath of those voices. It’s an heavanly song. She Bangs The Drums sees every solo sung along to like a song within a song and is yet another communal soaring moment and warm welcome for the least macho rock anthem of all time.

Breaking Into Heaven is primary proof of just how good Second Coming really was – the blues
licks sit well with the funky drumming – this is a track that could have sat perfectly on the lost album – 1.5 – the funky fabled album of post Fools Gold workouts. Sinuous and hypnotic this is a real highlight and that chord change towards the end still sends shivers down the spine and Mani yet again plays some magical bass runs.

This is the One sounds glacial and enormous and it really feels like like you have won the cup, Reni’s drum solo kicks of a triumphant Resurrection and kicks off some
Of the loudest singing in any football stadium. It’s now raining but who gives a fuck – the rain made this music – the dampness and the melancholy wrestled to the ground by the euphoric spirt of the city. The song is also a drumming masterclass – Fuck that kids still get them chops.

There is no encore – beautiful thing is played out on the PA to the fireworks.