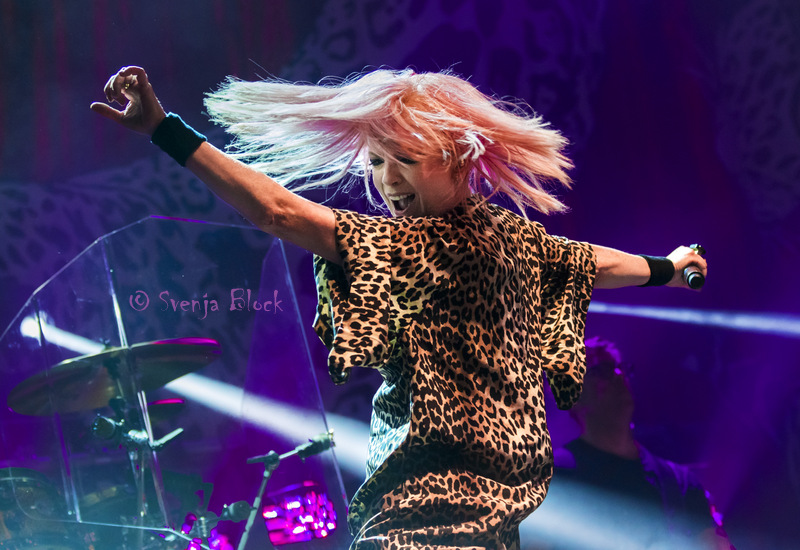 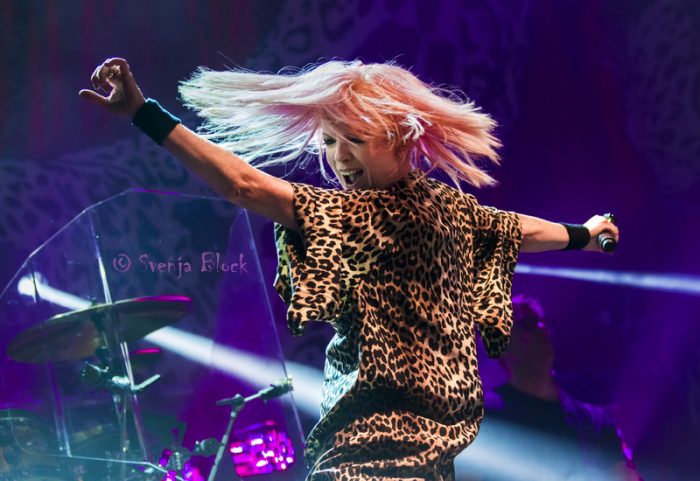 “I don’t give a fuck if somebody who I don’t know and never will meet thinks I’m a piece of shit. I don’t give a flying fuck.” The words that Shirley Manson spoke in an interview for Digital Spy in June of last year sum up the journey that the now 49-year-old Scot has found herself on. Riddled with low self-confidence and body dysmorphic disorder throughout most of Garbage’s multi-million selling career, Manson is finally allowing herself to enjoy the fruits of her labour with well-deserved joy and confidence.

First hearing “Vow” on a random compilation CD in 1994 I was immediately hooked on what was going to be Garbage’s clinical sounding take on trip hoppy alt pop rock, for want of a better term. Then came “Queer” with Manson menacingly prowling the streets in the accompanying black and white video, staring into the camera. That hypnotic track broke the quartet in 1995 and now, 17 million album sales and 20 years later, the sixth album “Strange Little Birds” has been released. Some of the band’s latter albums were received to mixed reactions and to be fair, there has been some fluff amongst their discography. This begs the questions: are Garbage still relevant? Will they appeal to a new generation of music fans and gig goers? Does anyone `give a shit about Garbage anymore? 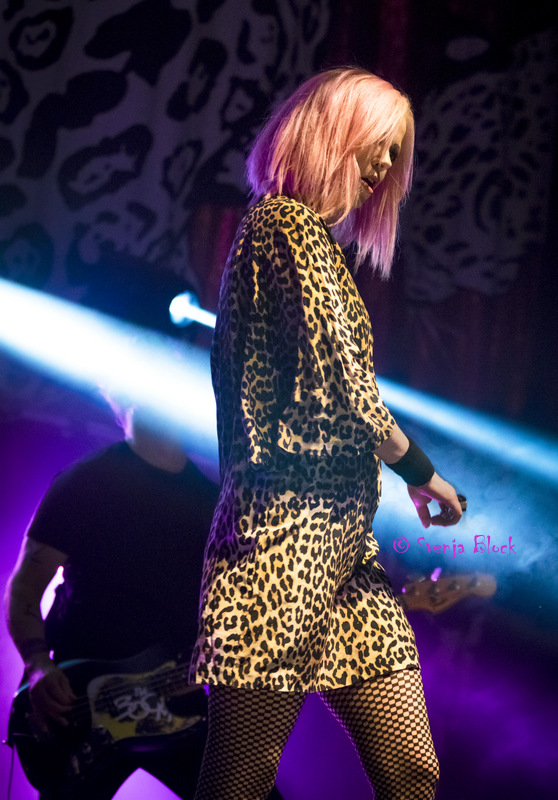 The gorgeous art deco venue Troxy in East London is bathed in darkness when Garbage open with “Sometimes” from the new record. In true Garbage style it surprises with strings before segueing into a pared down Portishead-like moodiness. It’s a quiet start to the show and the crowd is rather subdued but things soon pick up with the first single off the new album “Empty” which embodies all that is the chart-friendly Garbage – catchy alternative inoffensive pop rock with the unmistakeable Garbage sound. It’s the double of “Special” and “Stupid Girl” that really starts raising the roof and during the latter Manson spices things up with a real punk sneer which gives the hugely popular track some edge missing from the recorded version. The reggae-heavy “Blood for Poppies” from the previous album “Not Your Kind Of People” shows what Garbage are made of. Mixing reggae with heavy grungey guitars and a killer pop chorus sounds pretty terrifying in print but you have to hear it to really get it. Innovative and oh, so Garbage-y.

The vocalist pulls her pale pink hair up into a ponytail and the band launch into the title track from their 2005 album “Bleed Like Me”. “My Lover’s Box” follows and it’s now clear this gig is L-O-U-D. The barrage of guitars and the bass infiltrates every cell in the body. Manson addresses the crowd and in light of the shootings in Orlando dedicates “Sex Is Not The Enemy” to all those who harbour ill feelings towards the LGBT community. “So Like A Rose” from “Beautiful Garbage” gets an airing and it’s something a little bit special as it has not been heard since 2002. The leopard print clad Manson plays the guitar and although looking very much a rock star she manages to walk the tightrope of being just like one of us whilst still being the sassy frontwoman of an incredibly successful band. The chorus of “Control” from “Not Your Kind Of People” sounds huge, like hard industrialised Depeche Mode. “#1 Crush” rates as one of the sultriest records Garbage have ever recorded. This is more like the heavier, grittier original version which was a B-side to “Vow” and “Subhuman” singles rather than the trippy Marius de Vries and Nellee Hooper mixed version for the 1996 film “Romeo & Juliet”. Still the crowd falls silent and watches mesmerised as the pink-haired vixen purrs her way through the song and one can guess there are several males in the audience trying to hide their boners from their girlfriends and wives. 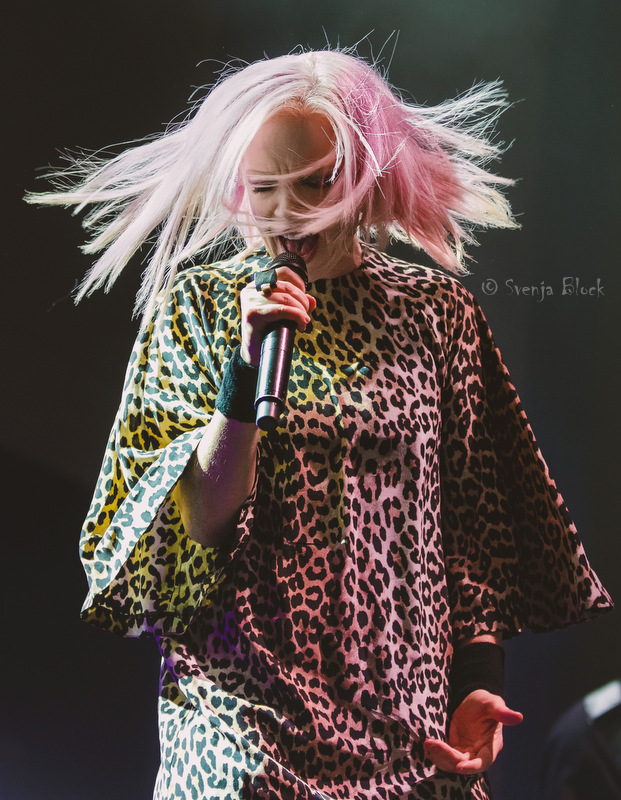 It was disappointing to hear that the mastermind behind Garbage, Butch Vig, would not be performing on the first leg of the tour due to acute sinusitis and doctor’s orders to not fly. However, Matt Walker (Smashing Pumpkins, Morrissey) who already filled in for Vig on the Garbage tour in 2002 has stepped in. When introducing her band mates Duke Erikson and Steve Marker on guitars and Eric Avery (Jane’s Addiction) on bass, Manson applauds Garbage’s 20 year friendship with Walker and follows up with “Automatic Systematic Habit” – Butch Vig’s favourite track from “Not Your Kind Of People”. Again, Garbage manage to mix things up a bit and the chandeliers in the ceiling are blasted with an electro track that wouldn’t be out of place at a modernised version of Studio 54.

Following the chilled out “The Trick Is To Keep Breathing” Manson confesses to the crowd that playing in London makes her so nervous she always arrives into town “with a weird, worried attitude and ends up spending a lot of time on the toilet”. She says more than once with a multitude of swear words how grateful Garbage are for the fans’ support through the years. Manson is notorious for her no bullshit attitude and having no qualms about addressing bad behaviour from the crowd but tonight at Troxy there is no need for that. The audience is, not surprisingly, more on the mature side as is the band, and the most raucous things get is loud singalongs and a bit of jumping up and down during the biggest hits.

“Blackout” from the oven-hot release “Strange Little Birds” is somewhat Cure-like and it’s a million miles away from the poppiness of “Empty”. “Push It” gets a massive singalong but the band sound so loud it’s rearranging my insides and my ears are the most painful they have possibly ever been at a gig. “Vow” follows and it’s a great moment to witness these veterans of transatlantic rock to play the song that started it all for them all those years ago. Despite Manson self-beratingly confessing to softening up a bit, she shows she still has the venom of her 28-year-old self in her – and thank heavens for that. After three encores and two solid hours of music, Garbage are done.

Always a bit left-field, that is Garbage. The foursome have the knack of mixing killer pop hooks, trip hop laced rock and almost any other genre under the sun all the while keeping to that super-shiny production. I must say that at times over the years I have thought of the band as a poor man’s Curve (a superb British electro band from the 90s). But, despite some chart-friendly smash hits Garbage have always been dark – if not musically, then lyrically. Shirley Manson has more brain than most females in the public eye and one would wish more young women in today’s world were encouraged to look upon Manson as a role model. Outspoken and honest with proverbial balls of steel and, in particular, a living embodiment of winning over her own insecurities, she breaks the mold amongst the phoniness of the plastic barbie dolls out there.

Truth be told I wasn’t expecting much from the gig tonight, but it turned out to be an entertaining, fun and career-spanning show. I was wary of Garbage having turned into a bunch of 90s has-beens desperate to cash in for their retirement before it’s too late. I eat my preconceptions with salt and pepper, for the set list was a perfect balance of new and old, hits and album tracks and although Garbage will always be more of a Shirley and The Blokes kind of a band, they sounded superb and with a firecracker such as Manson at the forefront, they are still as relevant as ever.