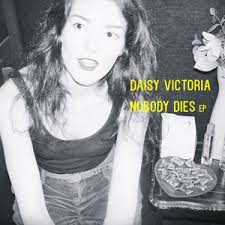 With a vocal range that belies her tender years she has an ear for sounds of the unusual which together make encapsulating music. So confident is she in the quality of the music here that not one but two videos have been released for each of the two opening tracks.

The title track throws together a rollercoaster sci-fi pop with her own unique twist. Percussion is given a backseat and sparkling electronica is permitted to shimmer alongside the incomparable voice that continues to be likened to that of PJ Harvey.

With second track Blue Arc (which we premiered here) the trademark guitar style opens a meteoric song which like the opener has a strong chorus and pop overtones. Her compelling sound entices you in and infects with incredible ease.

Ammonite slows the pace with its lo-fi production from brother Sam Lawrence, Daisy’s voice becoming an instrument against the simple neo-reggae backing which glides along quite effortlessly.

The pace is picked up slightly with Coals and a half-muffled verse vocal over a slow drum which occasional rolls between lines. Her voice picks up with an impressive rise in tone where the almost operatic vocal stretches like a songbird against the abrasive chugging of guitars and synth effects.

It’s no wonder Daisy has been described as ‘a rising star’. EP closer Another Sky drops the pace once more and her superb vocals are allowed to shine once more. A moon-stomp percussion almost creates an air of fear and her voice only adds to the beautiful haunting.

A sign of her amazing rise is confirmed by a recent support slot to Martha Wainwright and her name can only continue to spread as long as she releases music of this quality.