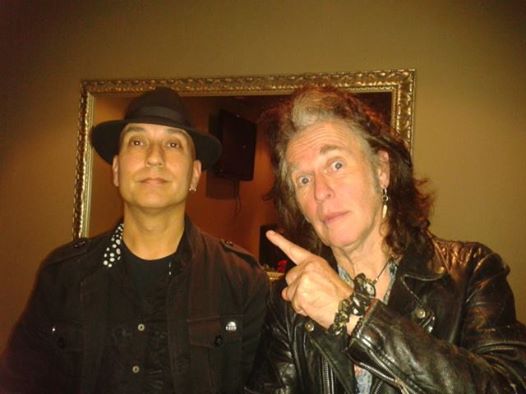 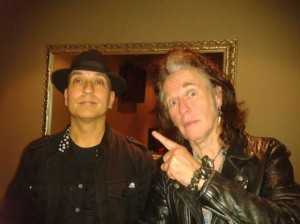 Louder Than War’s Martin Haslam talks to one of his “guitar heroes”, Bernie Torme.

October 29th, just prior to his gig at London’s Borderline club, I finally met one of my guitar heroes. Bernie Torme, as I’ve waffled on about before, is more than your average guitar player. A true one-off, aside from his solo career, he’s played with Ian Gillan, Atomic Rooster, GMT, stood in for Randy Rhoads on Ozzy’s US tour and yet is not the household name he deserves to be.

My fondest memories of him are being crushed at the front of the stage at The Marquee, mesmerised by his playing. The real link between rock, psychedelia and punk, I introduce to you, Mr Bernie Torme.

Louder Than War: There’s been a big gap between solo albums, 15 years, and I’d heard you’d been talking with Gav McCaughey and Ginger Wildheart about using Pledge Music for this album release. Prior to that, did you have a plan of what to do?

Bernie Torme: No; I had been doing GMT (with John McCoy and Robin Guy) and that kind of ground to a halt because John had a couple of health issues and wanted time out to record a solo album, so I was kind of stuck, last year. I had no plans; I’m a terribly aimless person. If I have a thing to aim at, it’s happiness really. If I don’t have something to concentrate on, I’ll do nothing. Chris (Heilmann; bass) and I hooked up again, had a couple of blows, trying stuff out and we really enjoyed it. He’s a really lovely guy, easy to get on with, the opposite of me! He hasn’t an ego, which is amazing in music.

We started to record things, but I thought “how am I going to turn this into a project”, then I played with Ginger at his Birthday Bash and met Arthur Brown, who’d just done a Pledge campaign, and his agent, who I now work with, so it all just happened quickly. Everybody said “do it”, but I was thinking “maybe only two people will pledge”, then it was, woah! “Love, and money!” It was amazing, just amazing. I didn’t think anyone would remember me really.

You seemed really touched by the response.

I really was and I still am. People want to hear it. While I enjoy playing old tracks, the reason I’m here on earth is the new stuff. I can’t listen to anything I’ve done before. Once it’s recorded, I only listened back to the bits I needed to re-learn to play it live! I don’t see the point in talking to yourself. I’m not saying my records are all shite! But I don’t listen to them.

So, you’re the opposite of James Brown then? He always listened to his records before going onstage.

Do you play any particular music in the dressing room before you go on? Anything to motivate or relax you?

No, because generally you can’t hear anything, it’s too noisy. I try to chill out, just beforehand and go Zen a bit really. What I like listening to at home isn’t representative to what I do. I like a lot of acoustic Americana, I like primitive things. I never got the bands like Journey; all the amazing production. I couldn’t give a shit about production. Anyone can polish, but it’s the emotion of it for me, that’s what punk was about.

And you’ve still got that approach with ‘Flowers And Dirt’, recorded at your home studio.

Yeah, to me it has to have a naturalness about it, an unevenness about it. I also like a lot of ethnic music.

There’s always been an eastern influence within your music.

Yeah, it’s just so raw. A lot of Indian stuff I really love. I suppose it’s from the 60’s; the Beatles, Ravi Shankar. It’s incredibly interesting in terms of scales. The Texas troubadour stuff like Townes Van Zandt, also, I really love. It’s just basic, it’s the song. A lot of rock doesn’t have that anymore.

What I wanted to get across in the album review was to dispel this idea of you being a “thousand notes a minute” player. People who have that idea of you haven’t really heard your stuff. Satriani is obviously a great player, but it just doesn’t move me.

That’s exactly how I feel. No disrespect to him.

Are you mostly self-taught, or did you have a period of having lessons?

I’m completely self-taught! I couldn’t find anyone to give me lessons. I had piano lessons up ’til I was about nine and I fuckin’ hated it! Then when I was eleven I got my first guitar, and in Dublin at that time there weren’t any guitar teachers! So, I just went and watched anybody. I had a reasonable ear, and was a fairly academic guy, so in the late 60s, when it was hip to learn obscure things, I learnt all of the scales and the modes myself, the Ionian and stuff like that. I joined a band in 1970 in Ireland, The Urge, and we had a trained sax player who went on to arrange the brass on The Commitments, Carl Gerrity. He explained it to me, and I kind of got my head around the scales. Unlike a lot of musicians, I’m quite a practical guy. I’m able to extrapolate things, so when I got the Randy gig, I knew the scales, in theory, and knew how they operated.

The thing I hate now is the Berkley thing, where all guitarists are taught exactly the same things. The blessing that I had was that I would hear someone playing and while I couldn’t play exactly that, I could play an approximation of it. It was close, but it was mine, and I think these colleges that teach drummers and guitarists are teaching everyone the same fuckin’ thing. It’s boring as shit. So, “who can play faster?” Well, who bloody cares? That isn’t music, that’s playing a typewriter, isn’t it? To me, one note is better than ten; you can hit it and make it count.

As you say that, it immediately makes me think of Neil Young’s “Cinnamon Girl” solo; one note, all the way through, but absolutely perfect.

Yeah, absolutely! I love him, and his solos are just fuckin’ killer. He does what he does and it’s just wonderful. Bad, good, perfect. There’s a clip of him doing a Beatles track with Tom Petty and Neil’s doing the solo and it’s just two notes bending. Perfect. Beautiful.

One last question for the musos; are the pick ups on your Strat standard ones?

Does that mean you turn the amp up full and use the volume control on the guitar?

Yeah, I also have a Big Muff which I use. This one’s only about two years old, a Russian one. I like it, though a lot of people don’t like them. They are ugly. I’ve always used them though, love them.

Many thanks again to Bernie Torme for finding time on a busy day for the interview. Thanks also to Rob Grain, Bernie’s tour manager for arranging it, to Chris Heilmann and Ian Harris and finally to the staff at The Borderline who were very helpful and friendly throughout the evening.

All words and photos by Martin Haslam. Find his Louder Than War archive here.