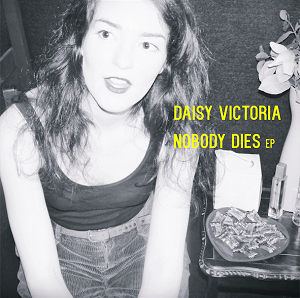 Nothing pleases Louder Than War more than seeing artists we have nurtured slowly make it to wider recognition. Which is precisely the case with Daisy Victoria, whose new video for Blue Arc it gives us great pleasure to premiere for you today.

In the case of Daisy Victoria it has been anything but slow since we raved about her Beef EP earlier this year (see our review here). Attention followed very quickly from Lauren Laverne and Huw Stephens, NME and The 405. She even managed to get herself a well-deserved spot on the Lake Stage at this year’s Latitude Festival.

She is now back with her Nobody Dies EP containing the brilliant Blue Arc, which, like earlier offerings, packs adorable vocals in with some wicked guitar work akin to Kristy Wallace of The Cramps.

“Named after the rousing title-track, ‘Nobody Dies’ demonstrates the next step in this intriguing new artist’s career. Channelling the punk swagger and poetic flair of Patti Smith and the vocal complexity of a young PJ Harvey, Daisy Victoria’s accomplished sound belies her young years.

“Lead single ‘Nobody Dies’ hints at a powerlessness to interrupt the flow of time and a determination to savour life’s best moments, powered by relentless marching rhythms.The majestic and beguiling delivery on ‘Ammonite’ is sensuous while the lo-fi production gives it inimitable style. A darker edge prevails on the Warpaint-esque ‘Coals’ while the slower tempo and delicate swells of ‘Another Sky’ close the EP in cinematic style, highlighting the complexity and range of Daisy’s extraordinary talents.

“With UK live dates throughout October and November, including hometown support for Martha Wainwright and Little Comets, Daisy Victoria is one to watch out for as the year draws to a close.”

Here is the premiere of the accompanying video…