Home Music Reviews Album Reviews The Zips: Down with the Zips – album review 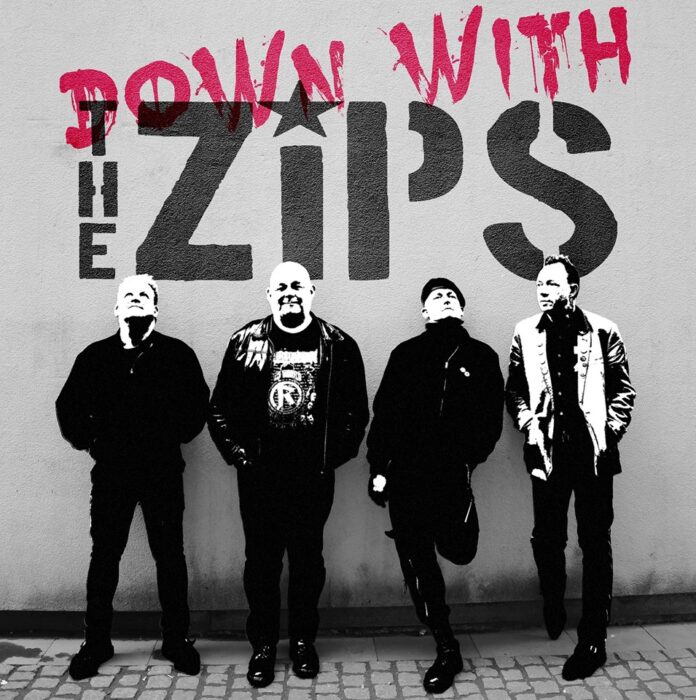 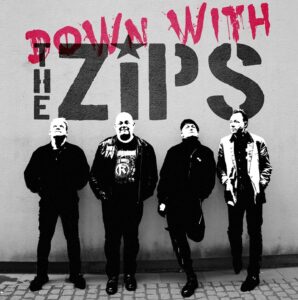 The Zips – Down with the Zips (Tenement Toons)

Despite releasing some well received singles back in the late seventies, The Zips wouldn’t release their debut album until 2006. With new album Down with the Zips, they’re now at number three, Ray Burke has a listen.

Coming quick on the heels of lead singer Jonzip McNeil’s fantastic solo EP A Hard Rain at Sunshine Corner, new album Down with the Zips is a rollicking affair with plenty of melodic punk anthems to rival any of their previous output.

The album opens up with the energetic street chant of Hear Hear, “ A country, at war, with itself and it’s people, it’s this, UNITED KINGDOM!”, a rousing socio-political track gives the album a fantastic and energetic lift off. There’s no apathy here, The Zips are angry about stuff, and that tone exists as a kind of undercurrent to the whole album,  it’s often pronounced, but typically manifests in positives,“Get up, stand up, do what you’re supposed to do.”

If on Hear Hear The Zips are making their stance on broken democracy known, on Thin Blue Line they’re talking about another cracked system. In true punk fashion they even get down to specific cases, listing off incidents of social injustice from Scotland’s past. Jon’s an unashamed fan of Strummer the bands Road To Strummerville released on the 10th anniversary of Joe Strummer’s death was a celebration of the late great front man, and you can hear that influence here, and later again with the Police on my Back like guitar of Siren Song, but it’s Once Upon a Guitar that appears as an almost musical homage to the band, lyrically too with it’s “yankee dollar” reference, and annoyance with the USA.

The desperately catchy Waiting Game is a celebration of the music that inspired the Zips, and the build up to the climax of punk. Having experienced the heights of Bowie and Iggy, they’re had to be more that disco!  “Up all night since the day we were born…We were waiting, every day the same” There are numerous stylistic nods, rock n’ roll, glam and the UK punk scene the band came up in, but there’s also plenty of New York in there too, notably in the the expressive stylistic guitar. The musicianship on show isn’t restricted to the guitars, and Buddie Poor’s (sic) driven drums on Over and Out are the backbone of the track, with everything else flowing around them, Jon’s shouty vocal,  some blistering harmonies,  and more of that colourful guitar all flowing together to create a blistering  2 1/2 minute anthemic ruckus.

There are several gems throughout, and plenty of stylistic diversity, like Phil’s lightning bass intro to WHOWHATWHYWHERE, another spirited number where the band wear their social consciousness on their sleeves, the frenetic Rock n’ Roll of the ironically titled No Dancing, and the boisterous We are all Berliners, a completely infectious knock out track. Throughout the band really demonstrate the element of fun within the Zips, lyrically there’s anger, but the tone is unmistakably positive. They’re still invested in the language of punk, and withhold those ideals they formed with, but there is nothing tired here,  they’re absolute champions of fun and as a result these tracks feel fresh and contemporary.

The new album from the Zips is full of socio-political tinged punk anthems, musically tight, and lyrically impressive. It’s a real celebration of the positivity that stems from anger when you refuse to take things lying down.

The Zips can be found online here: www.thezips.co.uk and they’re on Facebook.