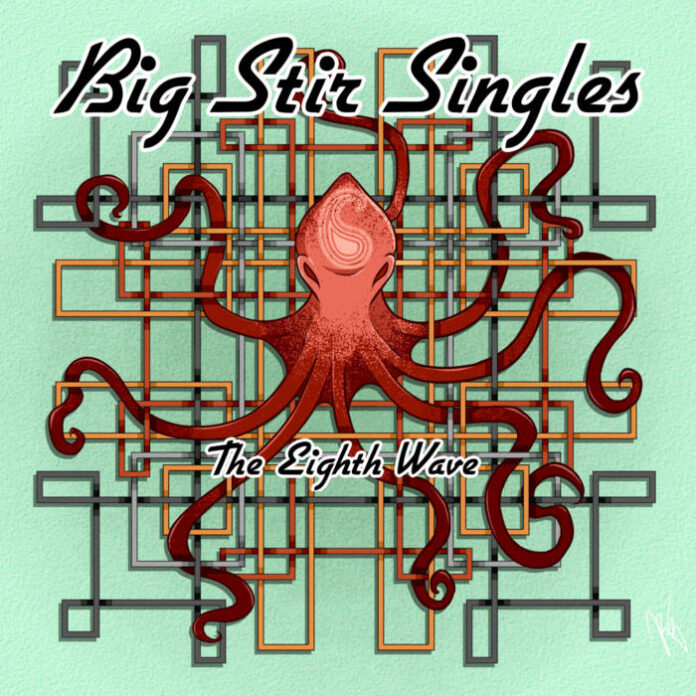 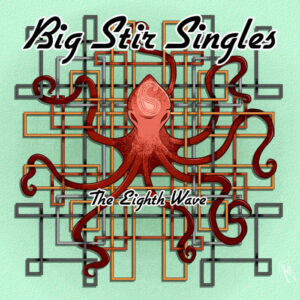 Compilation number eight in the Big Stir Digital Singles Series, with Spygenius, The Brothers Steve, mylittlebrother and The Wild Kindness all taking part…LTW’s Ian Canty ponders if this set is an eighth wonder…

The Eighth Wave, the final Wave collection of 2020 from the auspices of Big Stir Records, is another cracking entry what has proved to be an essential guide to great 21st century pop music. As with the recent editions, all gleaned from The Big Stir Digital Singles, this new compilation brings together a mix of exciting bands and artists new to the series and stalwarts of the Wave returning with some stunning fresh experiences to offer listeners. We are presented with two sides from ten different artists/bands this time round, with the sound spectrum running through folk rock, psychedelia, new wave, post punk and all points between.

Canterbury’s Spygenius open up The Eight Wave with the pure psychedelic pop class of Café Emery Hill, making sure that the listener knows right from the very off their time won’t be wasted. It’s from their excellent Man Of The Sea album (reviewed here). As we’re talking about singles in the true sense, they return with their beguiling non-LP flipside 13 Years (May Song), a gentle acoustic marvel. Next come The Brothers Steve with the single mix of Carry Me and Lunky Do. The former’s bright guitar pop attack hits the spot and the latter is a wryly comic reflection with some great harmony vocals.

The Speed Of Sound, a new name to me, have a vocalist that sounds a little like a street glam swaggering Bob Dylan on the mighty fine Keep It Quiet. Glide On By, their snappy second contribution, made me think of Cockney Rebel, which is pretty good going by my reckoning. All of which marks them out as an act to keep a firm eye on. That The Wild Kindness hail from San Francisco is clearly evident on the crunchy pop goodness of On Purpose, this is the kind of pop moment that seems to mean everything for the duration of the song. I know I harp on about it, but somebody please put the Big Stir roster on UK radio! Stranger In Your Soul, their other offering is very well constructed pop with an emotion filled strings part too.

I reviewed Librarians With Hickeys’ LP Long Overdue here and the flowing and catchy of That Time Is Now, from that very record, is included on this set. Their second outing is a fun one too, a cool but explosive version of the Banana Splits’ oldie I Enjoy Being A Boy (In Love With You).

I’m sure you will be most relieved dear reader that a rather better writer than me, Paul Scott-Bates, reviewed mylittlebrother’s Howl album (click here for the review), but I was delighted to witness their pair of compositions included on The Eighth Wave. Janey, featured on Howl, struts along in a stately but tough psych pop fashion, with lovely keyboards and spiralling guitar work aboard. D.E.F., their other tune, is in a good-time style folk rock tempo and very nice it is.

The off-beat moniker of Vegas With Randolph masks Washington D.C.’s premier pop rockers and they’re full of attack on N.S.A. They are blatently a band as adept at employing vocal harmonies and they are to kicking some heavy duty booty. It is the former of these qualities that VWR expertly apply to the feel-good easy charm of their second number Show Me Now. The punky EZ Tiger from LA follow with Last Hurrah, real fire here along with a knack for a singalong melody. If that and the more jangly Bird are anything to go by, they’re another one to keep close tabs, as both songs are very enjoyable indeed.

Leslie Pereira & The Lazy Heroes were a revelation on their excellent album Good Karma (yet again look here for the LP’s review). The title track from that record is here and it thoroughly enchants, spinning off in unexpected directions, but still retaining a hell of a tune. The solid rock & roll thud and classy songwriting of Clip, their other contribution, should be enough for the discerning listener to want to find out about this great band. L.A. resident Jason Berk ends The Eight Wave with End Of The Line, a Travelling Wilburys cover which he makes work with his freewheeling and unpretentious approach. Added to that his A-side, Strangers, is a wonderfully realised pop hoedown too.

These collections are always worth going out of your way to hear as you seldom find more joyous, energetic pop music anywhere else. It left this listener feeling substantially better about himself and life in general, which surely is worth its weight in the gold stuff of any variety. Big Stir’s collective nous has the happy knack of locating bands crying out to be heard and time and again they’re proved right on the money with their selections. The Eighth Wave is another superb compendium in a series littered with brilliant tunes, great playing and songs, plus a tonne of energy and real inventiveness. These sets bring a shaft of pure pop sunlight to what is a very grey world at present and for that we should be very thankful.