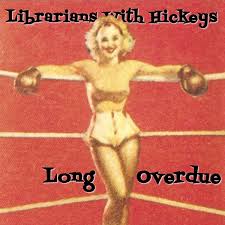 12 track debut album by Akron guitar pop outfit Librarians With Hickeys, released by the Big Stir label on CD and download…LTW’s Ian Canty shifts uncomfortably when returning his stack of borrowed books late and wracks up a small fortune in unpaid fines

Coming out of Devo’s stomping ground of Akron, Ohio, Librarians With Hickeys don’t share that much in common with the spud boys. But they do mine the period where their famed forerunners were active – in particular the smart and fast new wave pop of 1979, which in turn looked back to the chiming beat groups of the mid-60s for some of the inspiration. But don’t think of this as some sort of revival, more a restatement of those values carried forward, enriched and renewed for the modern climate.

The title Long Overdue refers to the time they have taken to complete this debut album, eschewing a quick recording process in order to try and craft something just right. The quartet of Ray Carmen on guitar and vocals, bassist Andrew Wilco, Rob Crossley on drums and guitarist Mike Crooker had already released singles Until There Was You and Black Velvet Dress on Big Stir prior to this LP, with new single And Then She’s Gone (featuring Lisa Mychols) also cropping up during the course of Long Overdue.

The aforementioned Until There Was You starts off the LP, with the drums kicking into a nice easy jangle, understated and bright beat music with a real snap. The song is a clever tale of a parallel universe in which Nick Drake managed to conquer his depression. That Time Is Now positively gleams on the guitar front, a delicate piece of true power pop with Lisa Mychols providing some dreamy vocals. Good guitar interplay with the bass and percussion hitting just the right tone. And Then’s She’s Gone could be a sequel to the La’s’ There She Goes, a sad but hopeful story of farewell. The playing here is very subtle, but still with momentum and some well-positioned handclaps assisting the bass guitar, which plays the key role by taking the lead.

Beginning with a ukulele and guitar strum, Be My Plus One is golden pop with a crisp feel, a captivating song of the first inklings of a love. Starting with drums and sax, Next Time has the kind of simple but effective of hook Shoes specified in and the drums kick the pace along nicely. Obsession comes at us like a 21st century Searchers, folk rock with a dip into psychedelia too. This one has a relentless rhythm and the kind of vocal that makes feels that you, the listener, are being taken into the singer’s confidence.

The fast Leave Me Alone is in a garage punk mode, a invigorating rush of words above a wobbly organ rhythm (most of the Librarians chip in on keyboards throughout the album). One of the more strange efforts featured on Long Overdue but one of the best too, finishing with what sounds like French directory enquiries. Poor Reception again possesses some neat guitar works and has a real bounce about it. A warm groove that takes its time, the song’s lyric seeming to reflect the emptiness of modern life and how lost and lonely one can feel amongst it.

Silent Stars ensues rhythmically with the pulse of the bass and then sweeps in, with heavenly harmony vocals seasoning the purposeful drive of the tune. A mid-paced, well-judged pop rock song with ringing guitar and breathy vocal, Alex is a shimmering study of lost moments and regret, an eerie keyboard drift seeing it home.

Changing tack a little by having some spiky guitars allied solid percussion, on Looking For Home Librarians With Hickeys present a fast moving tune with a cool but simple piano line. As bracing as a sunny autumn day, with a little bit of psych drone twisted in. Black Velvet Dress, also released as a single, brings the album to a close nicely, with some slashing guitar and drums cracks/whiplash handclaps. Another spectral beauty, a mystery that is very catchy too. It ends what is a very satisfying debut album, full of interesting ideas as well as a commitment to doing pop music in their own way.

On Long Overdue Librarians With Hickeys have produced a pop compendium of depth and variety. There’s an imagination and freshness which means that the band, even taking into account their self-professed mission to look back at ’79 power pop/new wave, present us with something new and striking. Virtually any of the tracks would sound a treat blaring out of the radio, the jukebox or the television, they cry out to be heard. Another band to be reckoned with from Big Stir, that represents the cooler sound of 2020, away from the troubled background of our times. Against all the odds it is turning out to be a quite a year for guitar-orientated pop music and this is an essential addition to anyone’s music library, I would say.