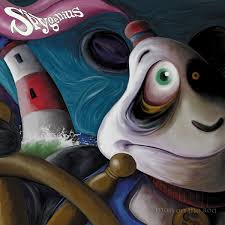 Spygenius – Man On The Sea

New 17 track double album by Canterbury’s very own Spygenius, their fifth overall….Ian Canty tries out his sea legs and wishes he hadn’t eaten so much beforehand…

I have to admit to being pretty late on the scene where Spygenius, from Canterbury, are involved. The quartet of Ruth Rogers (bass and vocals), Matt Byrne (keyboards), Peter Watts (vocals and guitar) and drummer Alan Cannings have been in existence for over 10 years after all. Man On The Sea is the quartet’s fifth album in total, but they only really came in my sights on the wonderful The Sixth Wave Big Stir Digital Singles compilation album. I’ve wanted to hear more from the four since their contributions to that record whetted my appetite, so after that this LP represents my Spygenius starting point.

Coming in at double album length, Man On The Sea arrives in a gatefold sleeve with some stunning design work to explore by Joseph Champniss. It comes with a very detailed fold out cartoon map, which provides us with a way to negotiate our way through the imaginative world of the LP. This all adds greatly to things, as unwrapping and exploring the sleeve makes it more like a puzzle demanding to be solved than just a record. So, deerstalkers donned, let us look deep inside the workings of Man On the Sea and Spygenius.

Our introduction to the LP is what sounds very like a brief snatch of the Steptoe And Son theme tune. From there a full vocal bellow takes us and into the quirky psych pop jangle of Another True Story. The performance is both rich and manic, with some lively keyboard work and the song enigmatic (with mentions of Golden Graemes breakfast cereal and serious drinking flashing by during a busy lyric). This gets the album off to a suitably invigorating start, but the pace slows down a touch on the more acoustic and lowkey Albion. They kind of remind me of a tougher Crowded House here. But then the guitars take it up a notch towards the end with some great harmonies and bass playing truly putting their own stamp down.

The sea/folk theme that runs through Man On The Sea re-emerges on the spritely If You Go A-Roving, a very perky and breezy outing. The eye for detail is something else on this LP, Spygenius always are tweaking or working on the small details to enhance the whole. Here the backing vocals really take the song up a notch, they really sparkle. A minor point perhaps, but makes a big difference. There’s also power here and restraint, but they manage to strike a real balance. The punning title of Salaud Days masks another smart piece of jangle pop and there’s a lovely effect achieved again with the voices and racing guitars.

Wind and a sea shanty structure brings us into Tomorrowland. The slow pace adds to the dramatic presentation of this song, with a storyteller/oracle telling tales of an imaginary future world. There’s a rich choral arrangement, the drums and cymbals swish theatrically and some fine piano playing does a lot of the hard work. Next we have the killer Café Emery Hills. A sweet, mid-paced psych pop wonder, this should be pumping out of every transistor in the land. Very catchy and elegantly constructed, with bells, sweetly shivering strings and what sounds like a marching band! A modern baroque pop classic.

Folk rock, which seems to always be in the background of this album, comes to the forefront on Dolphinarium 1986. This is notably slower, a near ballad in fact, until thudding drums pick up and the guitar weaves in and out eerily. An entry onto the list of songs about railway stations (Waterloo Sunset, Leeds Station etc), New Street starts with the words “I Know I’ll Go To Birmingham”, before weirdly giving way to a cool 60s garage psych organ drive. The drums again work wonders here, among woo woos, cries of “mind the gap” and much skat singing.

Man Overboard, the next offering, represents the dark heart of Man On The Sea. An epic that draws a comparison of the end of a love affair to drowning on the high seas. A touching and impressive instrumental performance is matched by lots of great lines in a fine piece of songwriting. My favourite is “And when Mr Christian pissed one me”, which lodged itself firmly in my memory form the get-go. The ying to Man Overboard’s yang, Green Eyed Monster is again lengthy and multi-layered. Its mixture of sirens and drones provide the backdrop for another sea shanty/folk theme, with some glittering guitarwork. A real atmospheric goodie, which segues into the insistent beat of In A Garden, a piece of catchy pop with real purpose.

Don’t Blame It On Your Mother follows in a more straightforward fashion, but it is attractive, riffy pop rock with a nice line in tension. In a music hall 60s style, the lyric of Midnight Bandola is a hymn to friendship, togetherness in trying to deal with life’s knocks, even though the right words are always hard to come by. Ruth Rogers’ Spite comes next, more like jangly indie pop, but none the worse for it. A very jolly, bright and engaging sound, neatly juxtaposed with a incisive lyric attacking someone who thinks the world revolves around them if, I’ve understood it correctly.

Watch Your Back has lovely beat sound that goes right back to 1965 without sounding dated at all, just simply great pop music and the following track Windy is delicate psych pop that recalls the early Teardrop Explodes’ wistful wonder. This all builds the finale of Remember Me When I Was Good, which is really pre-rock & roll at its base. A show-stopping stomp, which begins and ends with a ukulele and whistle and sarkily bemoans the loss of youthful vigour and creation. Despite the subject matter, it’s more of a comic than downbeat tale and provides a fittingly theatrical end to the LP.

To be five albums in and come up with the kind of energy and innovation that Spygenius ooze on Man Of The Sea is quite something. They remind me a bit of XTC at a similar stage, where a real depth and wild creativity has been added to some already keenly developed skills for writing and performing great tunes. That’s not praise that tends to be thrown around, but I think it is warranted in this case. The presentation is a big part of the whole thing too, all making for an alluring and intriguing mystery to be delved into via the sleeve, map and songs. A real whole world of an album you can throw yourself into – no need to just dip your toes into this sea.

Though far more pop than their city’s prog forerunners, there’s a similar spirit of adventure and this particular set of Canterbury tales is thoroughly absorbing. Spygenius makes it look easy when a great deal of hard work and love has obviously gone into this record. A picture of the ancient and modern living side by side in a sometimes uncomfortable truce, Man On The Sea is packed with ideas, great tunes and novel sounds – what more could one require?