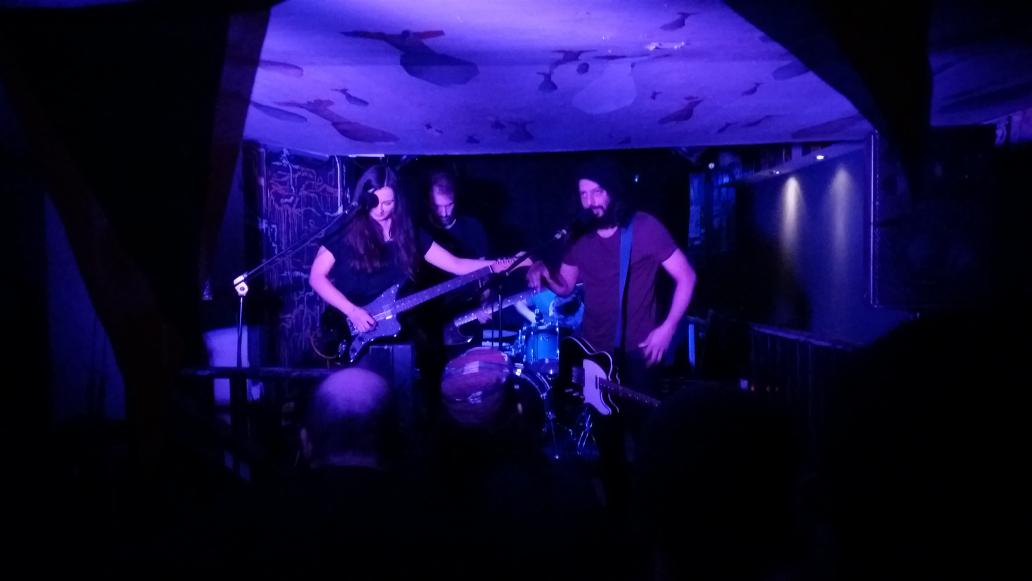 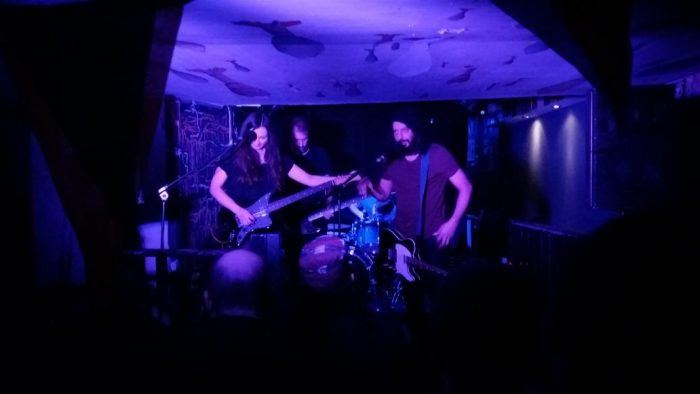 Invada Records’ Thought Forms took to the stage of Cardiff’s Full Moon Club earlier this week. Our man Simon Tucker avoided the Valentine’s Day clichés and ventured to his capital city to check them out.

It’s miserable out tonight. In fact it’s been miserable all day here in Wales. Wind, rain and fog have hovered over us for what seems like an eternity now (we have had some nice days to be fair but they soon get forgotten when the damp rears its head again).

It’s February the 14th and all through my capital city, couples are crammed into overpriced restaurants, forced into some kind of Hallmark idea of romance (bit of advice, if you’re only going out together tonight or have rush bought flowers and chocolates then you’re a cliché and need to look at how you are dealing with the relationship thang). Aside from the damp and cynicism that is running through my bones there is also a warm sense of anticipation and excitement as in a few hours I will be seeing Thought Forms play live for the first time in a few years (the last time being their set in the Cinema Tent at Green Man Festival).

The band are currently touring in support of their wonderful new album Songs About Drowning (our review of which can be found here). Since I last saw them Thought Forms have embarked on various solo projects and gigged relentlessly (supporting  65Days of Static and Bob Mould among others) and have added to their sound with the addition of Jim Barr on bass (more of whom later).

Before we get to Thought Forms though we have the support bands Esuna and Mega Bog. The former are decent and with a slight tightening up and less vocals (the band work better when playing instrumentals ) could be a real proposition and the latter, aside from their ropey name, are highly enjoyable playing wonky pop that brings to mind Cate Le Bon and Talking Heads. Certainly worth keeping an eye on.

Quick interval, sound getting sorted then it’s blast off. It is crystal clear from the opening notes of Forget My Name that Thought Forms have somehow managed to improve their sound (a feat I thought would be unthinkable as they were already one of the finest live bands on the circuit). Barr’s bass adds a warmth and depth to the sound serving as a concrete anchor from which the other three members (Deej Dhariwal, Charli Romijn, Guy Metcalfe) can pirouette around.

After a few songs it becomes apparent that all my previous grumbles were actually totally misguided as the weather and date are PERFECT for seeing Thought Forms live. Their voodoo-goth majesty perfectly suits the blustery weather raging outside and their music at its core is deeply romantic. Now I’m not talking Mills and Boon here, I’m talking Mary Shelley, Poe, Cave & Harvey. It’s a romance that comes with tragedy and violence.

Huge slabs of guitar riff and roll as the set progresses taking in a nearly 50/50 split between Songs About Drowning and their previous classic Ghost Mountain. What a great catalogue this band now have to draw from. The older mixes with the newer like hot water and bath salts creating a linear set that  dives and dips from doom heavy guitar rock to dreamy shoegaze never once missing a beat or dipping in intensity. Highlights from the latest album include the dessert rock The Bridge (their finest riff to date?) and Inland which is wonderfully atmospheric.

Ah the beat, that thing that propels life itself. The pulse, the rhythm, the heartbeat. The responsibility for this lies with drummer Guy and boy does he deliver. The famous saying about a band only being as good as their drummer can be a bit of bullshit really but there is no denying tonight that with someone like Guy in your team you are destined for greatness. The way he flies around the kit, sometimes giving a sense that it is all going to collapse at any minute but ALWAYS snapping back in on time and with force is a sight to behold. Having this drumming machine behind them means that the other three members can focus on each other, often locked in some kind of trance, dancing around each other as their guitars and vocals dual and sync. Charli’s vocals have never sounded as powerful as they do right now and the way Deej drags the myriad sounds out of his guitars is so ritualistic and trance-inducing.

By the time the band close their set with the incomparable Burn Me Clean all bets are off. The ugly lights get switched on, people slurp up the remaining grog in their glasses, some buy merch and get it signed with everyone acknowledging they had just witnessed a great band at the top of their game.

Thought Forms right now are one of a handful of bands that are really taking music forward. They deserve to be high up on every festival bill and certainly deserve to be filling bigger venues than the Full Moon Club (no offence to the venue of course which is a great sticky floor/graffiti toilet old school space). Do not sleep on this band. Go see them now so you can look back later in life and say “I was there when they were playing….” because once this band rightfully ascend to the top of the bill you’ll be pig sick that you missed them when they played locally to you.

On a night when the country was full of faux romance and empty gestures Thought Forms delivered  heart, soul, drama, passion and tension….which is  really what great love is all about.