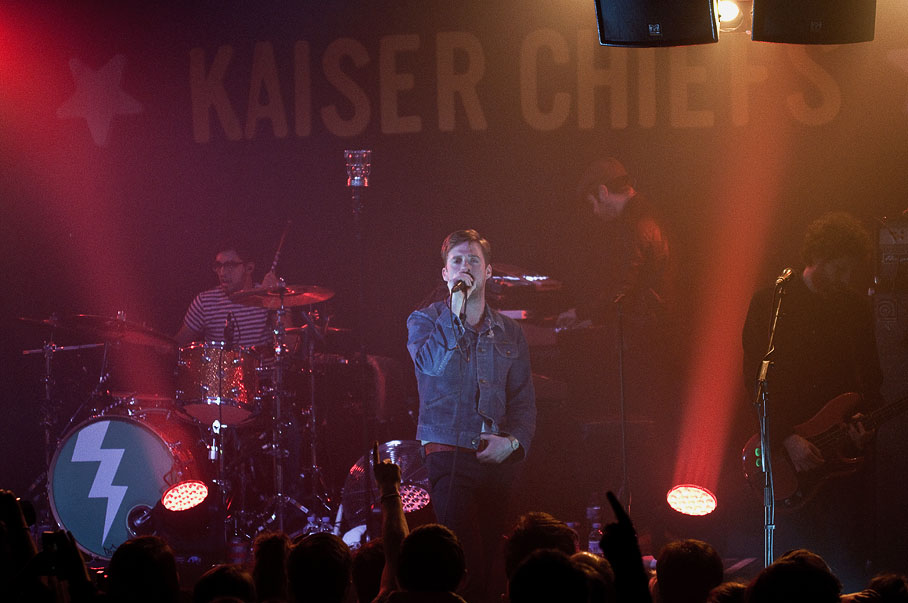 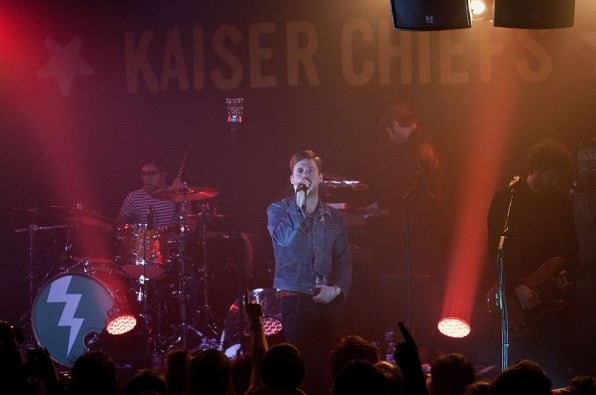 Louder Than War’s Nicky Crewe was in the audience at Gorilla, Manchester a couple of days ago to watch an intimate show by former chart toppers The Kaiser Chiefs. She was joined by one of our photographers, Melanie Smith.

They have always been something of a contradiction for me. Pop persona but with a political twist. ‘I Predict a Riot’ was potentially a call to arms. Ten years in the business, three Brit awards, a recent personnel change and Ricky’s current appearance as a coach on the Voice. It’s time to take stock, perhaps reinvent a few things and forge ahead. 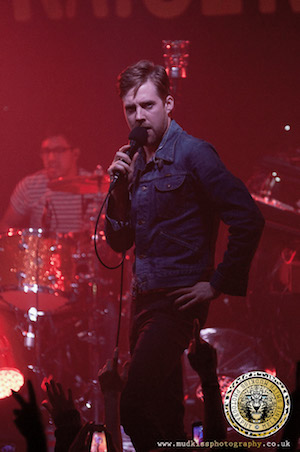 Gorilla as a venue has the potential for a bit of enthusiastic riot creation. Small and mighty, it’s an authentically stripped down space with nowhere to hide. The gig has sold out. There’d be something wrong if it hadn’t. This is a band who have filled plenty of arenas. Was Gorilla a ‘step down’ as the lad on the Fallowfield bus observed? Or was this going to be one of those rare gigs where you see a band full of confidence and experience play the kind of venue where the barriers are down between musicians and fans?

Dads and their lads. Couples who might have done their courting to ‘I Predict a Riot’. Devastated youngsters who had their tickets but the wrong ID to get them in. The band walked on stage to Edwin Starr’s ‘War’.

‘We’re back!’ I have never before heard a band apologise for getting too comfortable, taking it for granted. ‘We’ve got our hunger back’ announced Ricky. ‘Are you with us ‘ ‘Yes!’ came the answering roar. Fighting talk.

The audience know all the words, punch the air, meet Ricky Wilson more than half way. They never miss a beat. Old favourites mixed with new songs. Themes of war, anger, disaffection, unemployment and frustration. Ricky Wilson has to be one of the best frontmen a band could have. Inciting the audience, making his way through the crowd to climb the scaffolding balcony, singing ‘Angry Mob’ from the other side of the room. He takes a photo of the band with a fan’s phone. He comes back on stage with someone’s can of beer. He saves the crowd surfing for the end. He redefines working the room. He’s so good to watch that you could be in danger of ignoring the band, who are there keeping it altogether, supporting him and letting him run with his frontman role.

It was one of those rare gigs where the boundaries disappear between musicians and audience. The combination of the Kaiser Chiefs’ confidence as a band and a small venue created a very special experience. On the way out the security man said to me’ They could fill an arena, but they are here! One of the best gigs I have ever seen in a small venue!’

Once upon a time they claimed they could predict a riot. Now they look like a band who can handle one.

They are playing London, Spain and New York next. But as Ricky said, this was like coming home.

Also check out the photo gallery below.

All words by Nicky Crewe. This is Nicky’s first piece for Louder Than War. Photos by Melanie Smith, whose website can be found here.