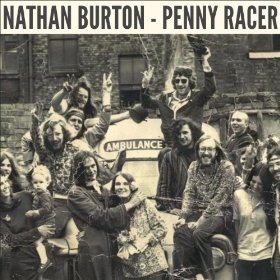 The much missed Nathan Burton completes a sort of homecoming with an exceptional album crammed with genuine talent, great songs and an authentic outlook on life, love and everything.

A close examination of Nathan Burton’s musical history would provide enough words of adventure to fill the pages here, but suffice to say the Wrexham born singer songwriter held a heady position as a leading light in Manchester’s resurgent underground Nu-Folk scene in the second half of the noughties. Success in the form of his landmark track It’s Hard To Sell Your Home (When It’s Part Of A Chain), on the city’s Northern Ambition label (home to Stephen Fretwell’s first record) threatened to break Burton to a greater audience, before he left Manchester and entered a period of relative musical silence.

This new record showcases what we’ve all been missing. Penny Racer is an album powered entirely by acoustica and with an enviable cast of players, who layer in strings , double bass, harmonicas and mandolins. Like a seasoned cohort of travelling players, they paint the soft canvas that underlines Burton’s bustling melodies.

As you’re drawn into this assortment of contagious songs, Another Day (La La La) reveals a beautifully infectious tune, in this case  relying largely on a strummed guitar and single vocal. It’s Nathan’s voice that connects, with its singular, inescapably accurate and dryly recorded tone and mischievous mix of humour and soulful kitchen sink authenticity. This harks back to Nathan’s first round as a notable talent on the Manchester circuit. Many of the songs pull at various influences, all rewritten for the modern consumer. The 60’s pop swing of #260, the sanguine melancholy of Chinese Laundry, the pretty lilt of Scrabble or the retro swagger of Andrew Ball, all cheerfully borrow from the sounds of The Byrds and the spirit of an unplugged Beatles.

The track simply named Instrumental, is the quietest and most reflective point on the album with the mesmerising ensemble exploited to their full, as they immerse a beautiful tune in the emotion and musical depth it deserves.  As the album closes on 100% Guaranteed, you’ll find a pleasingly slow reward,  as the blend of acoustic bar room intimacy, gently smoked in Western American flavours, provides a final wave on a perfect goodbye song.

This is an album that is both intricate and naked in its presentation and packed with some true gems;  with his cast of carefully selected support, Nathan Burton shines brightly in terms of song writing and performance, like a lost star that’s now found itself brightly back on the horizon.

All words by Jon Ashley . More of Jon’s writing on Louder Than War can be found here.