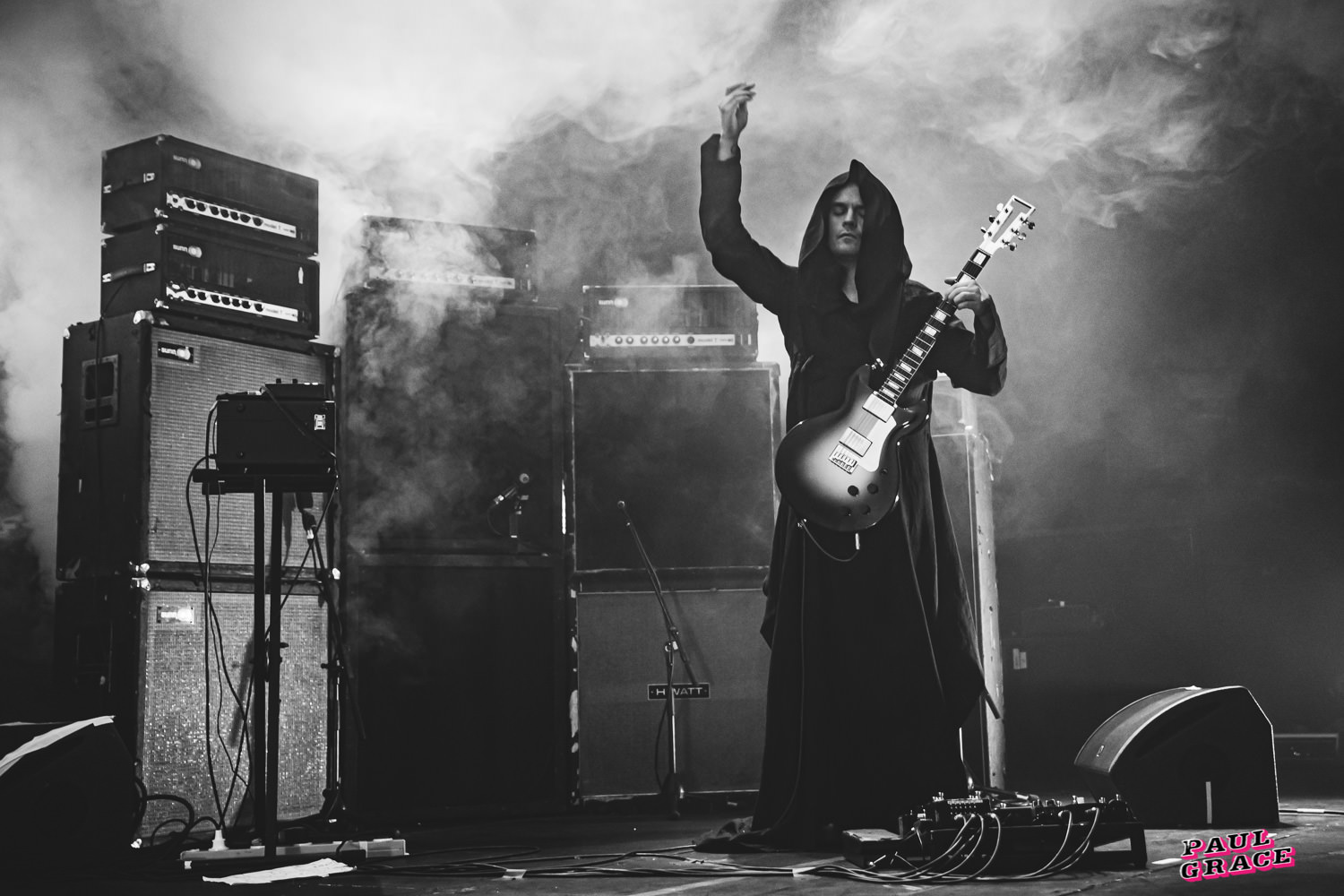 Sunn 0))) return to Manchester as part of the mighty ‘Season of Doom’ series. Toby Cryne talks about the life-changing musical experience (photos from London Roundhouse by Paul Grace). (After you have read this review read John Robb’s review of the same gig here )

How does one even begin to describe Sunn 0))) live? That’s the question I’ve had spanking around my brain for the past few hours.

Recorded and live, this band is two different beasts. You can hail Monoliths and Dimensions, or new album Life Metal, all you want. But knowing their Scott Walker years from their Southern Lord years ain’t gonna help you when you’re staring through an abyss of smoke and noise, trying to figure out what the fuck you’re going to do with your life from now on.

Seeing a Sunn 0))) show is about embracing yourself in the intense atmosphere – giving yourself completely to the experience and forgetting where time starts and ends.

I’m feeling different. I’m calmer and more relaxed. The intensity of the show has started to wear off, and I’m left feeling like something is clearer in my head. Something in my life, that I won’t bore you with, is going to change. It was on the cusp before but now I’ve been pushed over the edge.

My alarm is shrieking at me but I can’t hear it. I’ve still got the earplugs in from the show last night (they hand them out as you walk in) which I put in to drown out the sound of the crying baby upstairs (not my own). I feel light-headed and airy. I don’t really feel a sense of purpose today. Sure, I had a few to drink last night but this isn’t a hangover. This is different.

I’m sat up in bed watching the most light-hearted thing I could find on Netflix – Friends. I can’t stop thinking about the fog. The sight of bobbing heads and shaking floors. It’s seared into my brain. 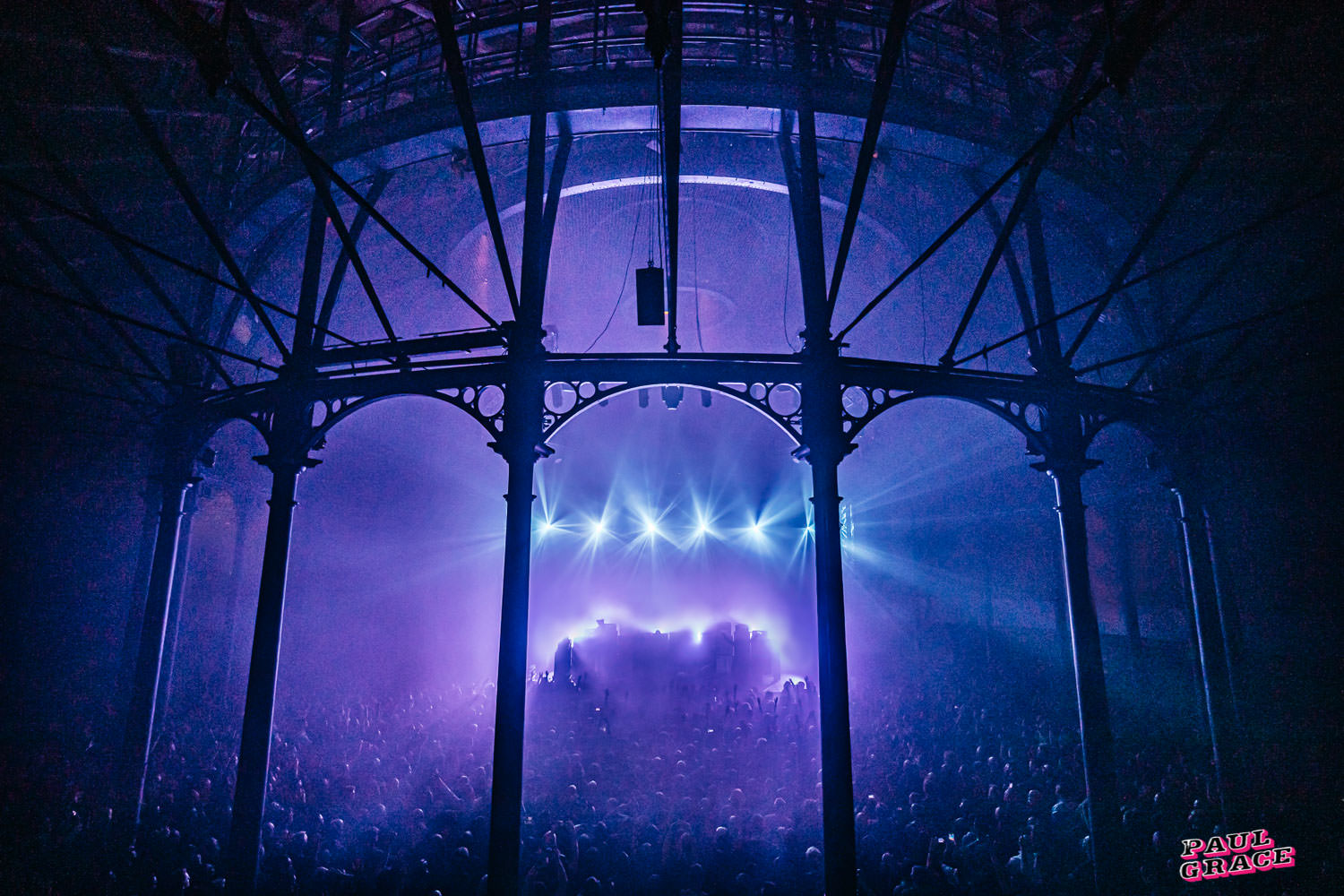 Whatever hell time the band finished

The smoke is clearing. The guitarists come to the front of the stage and bow. For the first time tonight, the audience makes a sound – rapturous applause and screams. The five of us gather our heads together – what the hell did we just experience? It’s like when the lights turn on at a rave. The only difference is I’m not high on MDMA – I’m high on something real and palatable. Waveforms and sound energy. 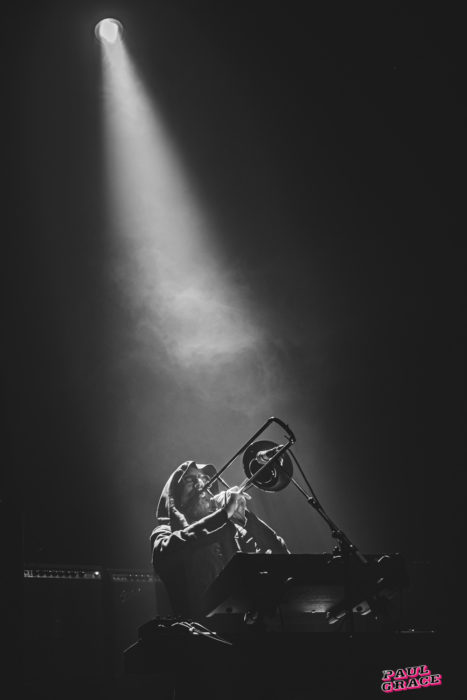 The smoke has cleared in the middle of the stage and there’s a lone trombone shining out of the darkness. The cloaked guitarists are nowhere to be seen but the low rumble of their instruments is still present. I have no idea how long it’s been this quiet. I look around and see everyone still, in a zombie-like state.

The atmosphere is eerie and strange. Nobody says a word as the low drone cause the walls of the former Methodist church to shake. You can feel it pulsating in your toes. Fleks of light reflect off the stain-glassed windows and cut through the smoke. My eyes are closed but gazed down to the floor – my neck has been craned for what seems like an eternity.

Some time near the start

Time neither moves slowly or quickly. It’s irrelevant. The four, or five, or six cloaked people on the stage slam in unison as chords change. The low grumble of their Sunn Model T and Ampeg SVT amplifiers is quite literally moving the air around me. I’m not quite sure whether I’m supposed to cry or smile. I feel like doing both.

Out of all the bands I’ve ever seen, I’ve never felt transformed by a show until now. I’ve been to shows that I thought were magnificent, and have changed the way I felt about a style of music. But I’ve never had a band so affirm a way I was feeling.

Two days before Sunn 0))), I’d buried a loved one. The context of life shifts when you’ve been around death. The inevitability of it becomes an uneasy, but accepted realisation.

Death is an uneasy thing to live with because it puts a stamp on your time, on your loved ones’ time, on everyone’s time. But an experience like seeing Sunn 0))), where the concept of time drifts into insignificance, makes the concept of eternal life, or eternal death, that bit less scary. Because time isn’t important. What matters is what you do with it.

You can find Sunn 0))) on Facebook or at Southern Lord, here.

Photos by Paul Grace from London Roundhouse. To see more of his ace work, click here and here.