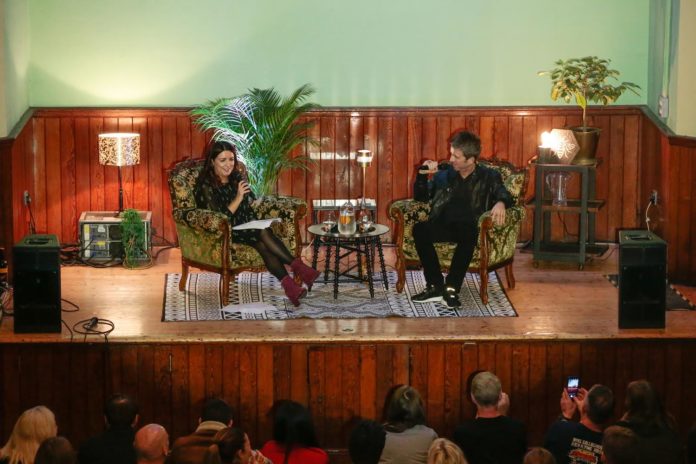 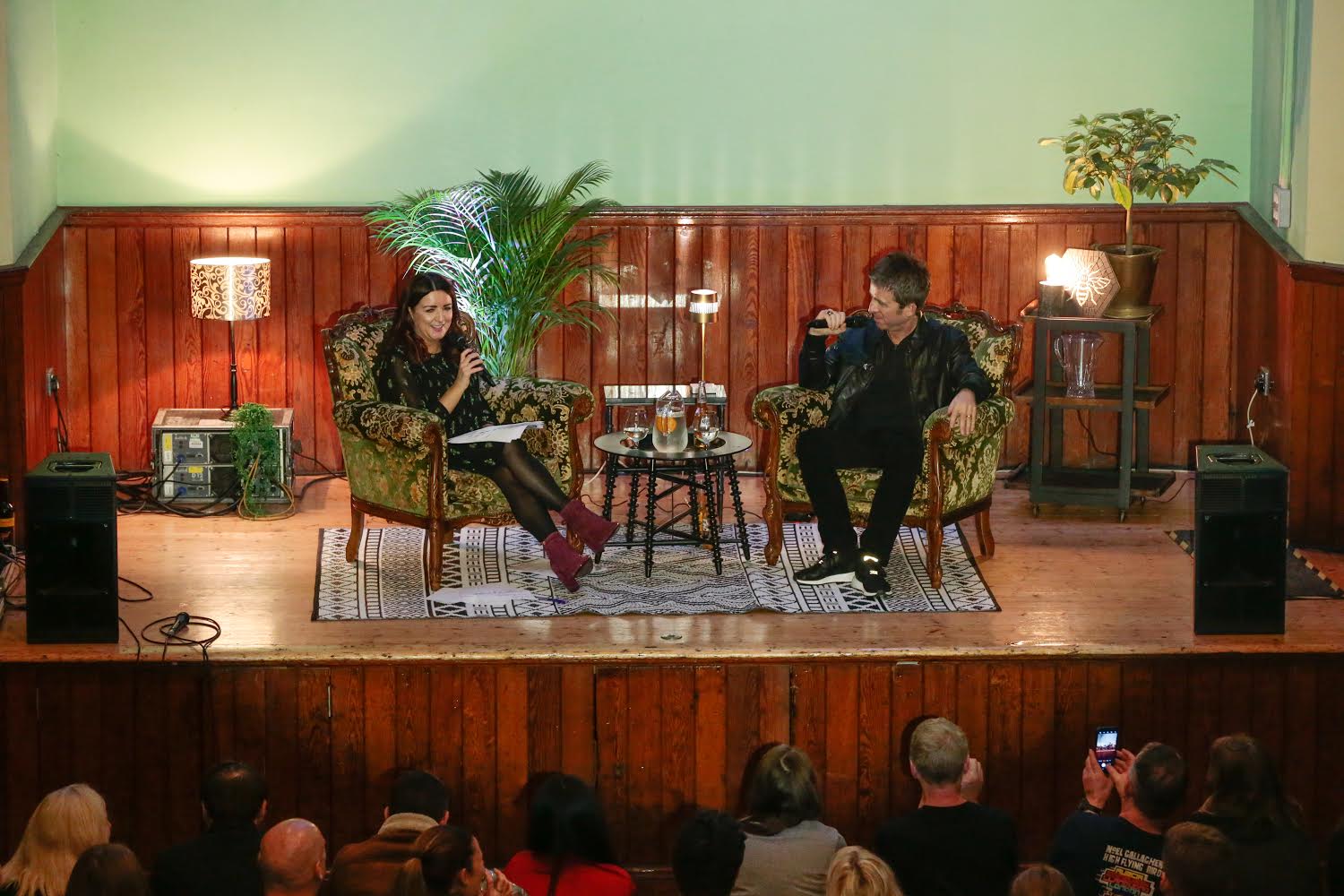 Photograph by Sharon Latham
An audience with Noel Gallagher raises an amazing 8.5K for Salford Lads Club.
“My 50th was f**king amazing. Madonna turned up and she wasn’t even invited. Like a true Mancunian, I said ‘Who the f**k invited you?”

This was music legend, Noel Gallagher’s reply to a question about his favourite party asked on stage at Salford Lads Club.

Noel was invited to the iconic venue for this fundraising in-conversation event, by events organiser (and old friend), Alison Bell and tickets sold out within a minute! It was the latest charity in-conversation event at Salford Lads Club ~ previous guests have included musicians, Peter Hook, Mani, Clint Boon and Mike Joyce; actors, John Thomson and Chris Gascoyne, as well as former Manchester City hero, Paul Lake who introduced Noel on stage at the club on Friday night.

Noel spent 90 minutes answering questions about his career, directed to him by Dr Kirsty Fairclough, Associate Dean of Research & Innovation at Salford University.
Throughout the evening, Noel was laid-back and very funny whilst they covered a variety of topics, including Manchester, songwriting, writers’ block, creativity, Manchester City, journalists and David Bowie.
One of the first things Kirsty asked was regarding Noel’s favourite thing about Manchester, to which he replied succinctly, “Manchester City!”  But when Kirsty questioned Noel on his relationship with David Bowie, Noel was more than happy to talk about him at length:

“I’m a huge fan and I’m always suspicious of anyone who is not a huge fan..he was a genius! One of my biggest regrets is that I met him once and I was a bit too stupid to appreciate him. I went to see him at Wembley Arena and someone came up to me and said “David would like to see you and I was like, ‘Course he f**ing would!’ But when I went to the dressing room he was putting on make-up and he was like ‘hey man,’  but I was a little bit too young and stupid to appreciate that I was there and said, ‘Have you got any beers in’. But I would love to…if I could only meet him now and tell him what he means to me… but back then I was just shrugging my shoulders.’

Kirsty went on to ask Noel about what he thought of David Bowie’s final album, Blackstar. Noel replied,

“I didn’t like it at much as The Next Day…I thought that was a masterpiece. When he won an award at The Brits, I presented it to Kate Moss because he wasn’t there. I’d been out all night and the next night in the evening I was sat on the couch and hungover to f**k and there was an email on my iPad and it just said ‘Thanks for the shout out. Keep writing. DB’ and I was like ‘who the f**k is DB’ but it dawned on me and I emailed back something like ‘ Great f***ing night (I’m such a knobhead) and he emailed me back immediately and I then I shit it ,thinking ‘I’m having a conversation with David Bowie!’ He is one of the all time greats!”

When Kirsty asked him about the media and journalists he replied: “I get asked the same f***ing questions all the time. The worst question starts, ‘I’m not supposed to ask this’ …well why are you f***ing asking me then? And then it’s like…*the inevitable question* and to answer that…I haven’t got a f***ing clue!

When Noel was asked about which song he wished he’d written he said that it really depended on his mood that day. “Sometimes it would be Moon River or it might be Hey Jude or A Town called Malice.”
Kirsty also posed the question as to who would be in his supergroup and what he thought of singers/frontmen nowadays.  Noel said that there aren’t any real mavericks anymore. He stated there is really only “Ian Brown, Johnny Marr, Hooky, Bobby Gillespie, Shaun Ryder and Our Kid”.
When asked about his future ambitions, Noel replied:
“I’m still trying to write the greatest song of all time. I know that sounds pretentious but that’s kind of what keeps me doing it. If somebody would say ‘Oh you’ve already written it’ and if I ever felt that I had already done everything I was capable of, I wouldn’t do it. Thank God I have an interested in life and music. I’m not driven by anything other than making music so I’d like to just keep doing it and keep on having the enthusiasm to do it and still trying to write that f***ing song so…that (ambition) and go to The Champions League final! I mean I can go to one when I want and I’ve actually been to about 6 but sadly my team were not there!”
There was also an opportunity for the audience to ask Noel questions, which Kirsty read out on stage.
George Murray from Chorlton asked Noel out of all the singles he’d released, what his favourite B side was. Noel’s reply of “Half a World Away” received a huge cheer from the audience and then he added “John Lewis made me a fortune for it, ironically I’ve spent a fortune in John Lewis”
Simon Richardson asked which three songs Noel would like played at his funeral. Noel’s reply was “The End, Going Underground & Stairway to Heaven.”
When asked what his favourite gig he’d ever performed at, he said the two nights Oasis played at Maine Road. Noel said the band were actually ‘skint’ when they played there because the royalties hadn’t come through.
At the end of the evening, Noel was happy to sign plenty of memorabilia backstage, including prints and canvases from artist Justin Eagleton and cartoonist Tony Husband, who donated their work to Salford Lads Club for the raffle.
The event was a huge success, with 8.5K raised for Salford Lads Club. Manager, Leslie Holmes:
“Everyone I spoke to seemed genuinely thrilled to be in the audience for such an intimate event and it raised much needed funds for the continuation of Salford Lads Club. We’d like to thank Noel, Kirsty and Alison for making this happen.”

Noel’s summary of the Salford Lads Club event itself: “I had a blast!”

Three pairs of tickets for this event were auctioned online for the charity Forever Manchester, and raised £1400.

Salford Lads Club is a registered charity and first opened in 1903. It was made famous by The Smiths’ seminal album The Queen is Dead with its inner sleeve photograph depicting the band outside the venue.
Although the venue is called Salford Lads Club, the charity has been named Salford Lads and Girls Club ~ since 1994 over 170 local young people aged between 6 – 19 use the club each week. Various TV dramas including Peaky Blinders, Cold Feet, Last Tango in Halifax, Coronation Street and many others, have used the building as a film location.
One of Salford Lads Club’s famous members was Graham Nash, who featured in BBC One‘s Inside Out, reminiscing when he went to the club as a young boy and when his band The Hollies rehearsed there. Other well-known Salford Lads Club members include footballers Albert McPherson, Steve Fleet, Eddie Colman and Brian Doyle; BBC broadcaster Mike Sweeney; and lead singer of The Hollies, Allan Clarke.
Founded by The Groves brothers in 1903, Salford Lads Club continues to provide opportunities for local young people in sports and arts. The club was purpose built and designed by architect, Henry Lord and was an exemplar of its time. It is regarded as “the best example of this rare form of social provision in England” The club has an amassed an incredible archive of photos, records, film reels and memorabilia over the years.
In June 2016 the volunteer team at Salford Lads Club were awarded The Queens Award for Voluntary Service. Between them, they have contributed more than 600 years volunteering. Archie Swift MBE and Eric Salthouse have each been involved with the club for more than 60 years. In 2008 the group were awarded The North West Heritage Volunteers of the Year by the HLF.
Visitors come to trace their family history, on heritage open days or to see Salford Lads’ Club in action. It is open to the public every Saturday from 11am to 1.30pm and has been part of the Manchester Music Tours that incorporate the club and several other Manchester and Salford music landmarks.