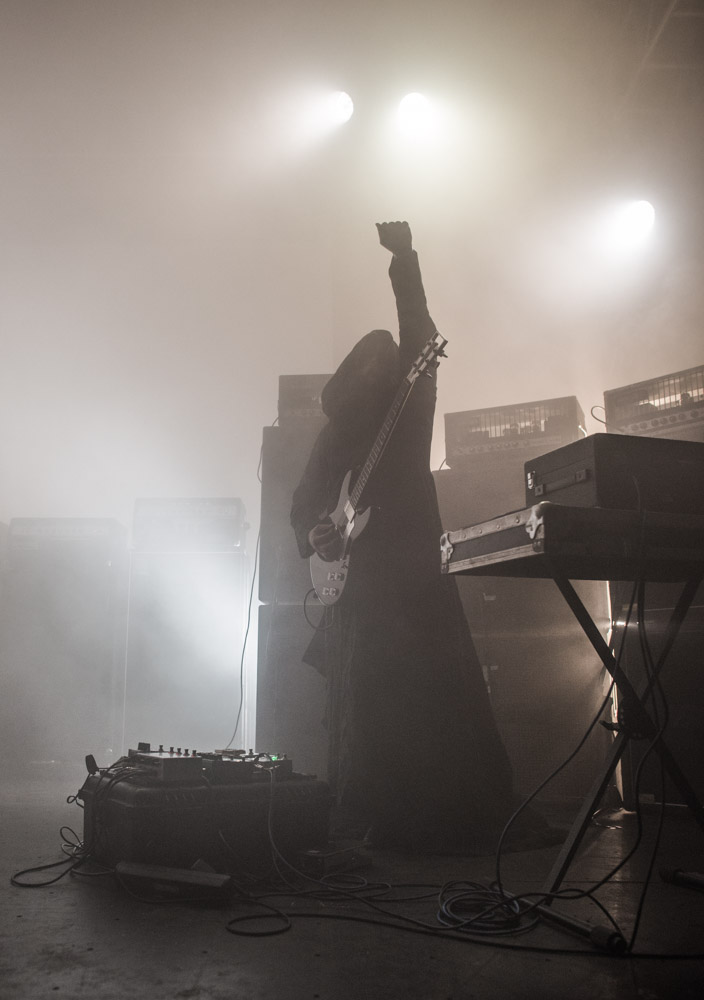 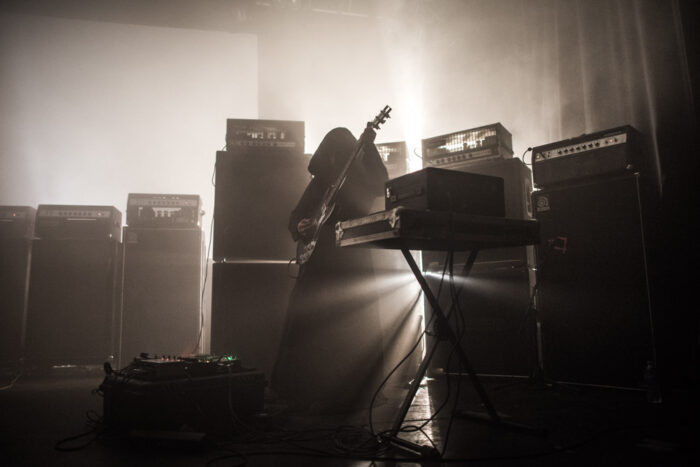 Tonight was an astonishing experience with two bands pushing beyond the boundaries of possibility. The venue also played its part with its beautifully refurbed old church hall and the giant church organ dominating the stage adding a deep and dusty atmosphere and sense of history to the deep dark sounds of bands.

Is Sunn O))) were locked into setting their controls to the heart of the sun with their imperious drones then Anna Von Hauswolff was constructing a dark and powerful oozing sound that was full of imagination, ideas and sensitivity played out in grinding drones and dark matter textures to create a set of songs, including two new ones, that are her best yet. Both bands are existing in the land beyond black metal – the Norwegian musical form that broke the dam of possibility and darkness and left whole new vistas to explore for anyone who dared.

With a rock music stripped down to its fundamental ooze Sunn O))) have created a perfection.

The darkest of monks of the apocalypse emerge on the stage shrouded in their cowls and billowing dry ice creating a high decibel mystery as they coax an all enveloping wall of sound from their mountainous amps utilising alternative tunings, feedback and low end drones. Somehow stalking the farthest fringes of extreme, metal and underground noise they have created the ultimate in drone – stripping away all the cliches of rock and exposing its intense black hole inner core. There are no drums, no solos, no film flam and tonight no vocals as their sometimes singer Attila Csihar was not with them. There no colours, no ‘songs’ just the grindingly brilliant wall of sound – a monolithic force that engulfs and immerses you and is oddly meditative and redemptive in its grinding Beaty.

There is none of decoration of normal music like choruses, song structures or even breaks between songs. This is a black hole that brilliantly crushes everything into its massive density of sound.  Nearly two hours of this dark sound with the occasional chord changes smashing against your head like the waves smashing onto the broken rocks of a shattered coastline.

It’s this very fundamental ebb and flow that captures Sunn – they are life and the universe itself stripped down to it’s primal core. They truly are the hum of the universe – a gargantuan and spellbinding wall of omnipresent sound.

The only strange thing is how they have managed to bring this huge audience with them. There was nothing in the manual about constructing a music as pulverisingly elemental as this, as densely dark and ambient as this, as full of a bewitching voodoo as this and somehow sell out 1500 capacity venues all over the world with it.

They dared. They won.

Tonight the band play for nearly two hours without a break. Their monolithic sound fills every nook and cranny of the old church and its almost painfully loud. My sturdy, specially made earplugs are useless in this barrage but it doesn’t matter because like all true heavy music like this there is an exotic beauty in the textures beneath the agonisingly slow chord changes. The very vibrations of the music shudder and split atoms as the grind at the slowest of paces. It’s a perfect celebration of the two Steve Albini recorded albums they have released this year – Life Metal and the recent Pyroclasts – adventures deep into dark ambient or the possibilities of heavy sound.

Sunn O))) are fundamental and physical – the very vibrations of their music rattles your atoms and massages your soul. This is powerful stuff and you are lost in the elixir of black sound. The swirling dry ice backlit with washes of colour pulsates and fluctuates – perfectly reflecting the music and only the cloaked silhouettes of Greg Anderson and Stephen O’Malley were visible when the fog parted long enough to reveal the stage. The hooded figures sometimes hold their guitars aloft or are lost in their spectral wall of sound surrounded by a semi circle of various classic amps and a set list made up of musical keys to drone in with the songs titles replaced by the fundamentals of chords C>G#>A# and yet it’s this very detachment from the basic foundations of rock communication that draws you in and the music with all its minutia is still as complex and emotional as any.

The only break is about 2/3 of the way through when a trombone appears over the amps and picks out a haunting melody line hinting at the Miles Davis flavours they toyed with with their joint record released with Ulver a few years ago.

For the whole set the audience are rooted to the spot, lost in the experience, some held their hands in the air in deep mediation, surfing the sound, others were bamboozled and some attempted to make sense of it all by filming snippets of their set onto confused iPhones. It’s a full on experience. The Sunn O))) Experience and like fellow Seattle guitar game changers Jimi Hendrix pushing forward the possibility of the electricity.

Support tonight came from the wonderful Anna Von Hauswolff, who Louder Than War has been singing the praises of for years now since we caught her playing in Oslo six years ago. That first night the Gothenburg native played a haunting set that we fell in love with but has has morphed into her own juggernaut of sound, Touring with Swans and singing on their new album with her sister has encouraged her to go in deeper and darker and to see just what can be done with her music and in 2019 Hauswolff sounds huge and dramatic. Their are long atmospheric build ups that explode into glacial frenzy, there are heavy one note bass grooves – like the darkest of funks, there are tribal drums and a building up of an avalanche of sound, bowed basses and misty mystical keyboards.

Each song is like a huge adventure with its own textures and atmospheres and it’s this sheer imagination of sound that builds the perfect base for Anna’s astonishing tingling voice that swoops plaintively or explosively over the top. She has the most amazing of voices – it’s huge and expressive and full of the rollercoaster of emotion and fills the venue with its intensity of beauty.

There are two new songs that open the set – the first is a slow burning build of drones and atmospheres that is utterly captivating before it explodes into its climactic plateau and the second is the drums plus percussion building up a very different texture – both bode well for the next album and both see her moving forwards into new areas and building on the 3D, almost cinematic brilliance of her sound.

Tonight is the most powerful, expressive and brilliant set we have seen her deliver – truly it can only be months before Anna Von Hauswolff is headlining these big halls. She is easily the equal of her contemporaries like Nick Cave, PJ Harvey, Sunn O))) or Swans – the Emperors of dark magus or the empresses of wild sound, She is, perhaps, even surpassing them in the sheer breathtaking originality and daredevil musical imagination and emotional reach of her songs.

Anna Von Hauswolff is that good.

This was one of the gigs of the year.

Both bands way beyond the boundaries with Sunn O))) exploring whole new terrains and Anna Von Hauswolff reconstructing a beautiful apocalyptic vision. LTW insists you go an immerse yourself in their apocalyptic visions

November 28, 2020 0
A long time mainstay of the Manchester music scene Dougie James has died at the age of 72. Dougie was known to many in the post punk period as being part of the gig promotion team with the late Alan Wise. He had his own musical history as the lead singer of the 1970s band Dougie James and the Soul Train.
Read more