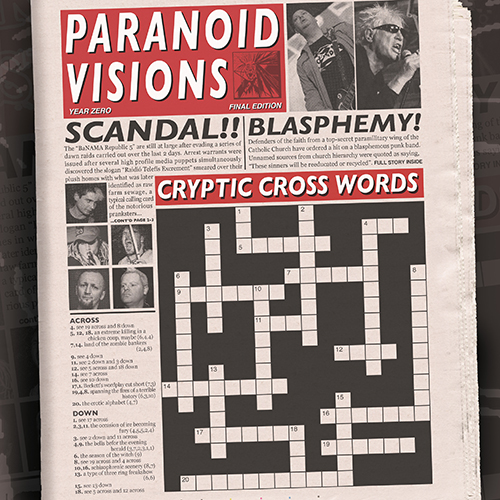 It’s been three years since Paranoid Visions epic, apocalyptic Escape From the Austerity Complex.  The scope of that album was large, they took the kitchen sink approach, a gamble that paid off with a fantastically realised album. Since then they have released an album with Steve Ignorant, an influence on the formation of the Dublin punk greats over three decades ago. It was an excellent rough and ready purging of the sound of their raw beginnings. On recent EP Two Black Eyes they appeared to be spending more time perfecting things in the studio, and on this new album they have honed their sound even further, sounding more confident, and more determined than ever.

The dark threatening shadows of the Irish catholic school system hang hard over opener The Angelus at 6pm, a hypnotic track that strikes terror into the listener with it’s use of latin verse over a subtle but effective marching drum intro. Steo Pain on samples has never had more to do as on this album, and it enhances things every time. The slow build up conjures up visions of young students walking in precession to their fate, until it erupts with Deko’s bone rattling reflections accompanied by stomping drums, a violent chugging riff, and a piercing meandering guitar. Throughout the  Lead singer Deko is in incredibly strong voice,  and the symmetry of the band is astonishing, primal and purposeful, they’ve never sounded as good.  It’s a defiant call to arms beginning, and that momentum remains for the duration. They’ve moved into a new gear here, upgraded their production, without losing any of their erratic and diverse charm.

The Great Dictator sampling Across the Holocausts is a high point, powerful and resonating, Aoife’s voice soars. Long on the path to becoming a vocalist of note, on ‘Cross Words’ she is a fully formed, and sees her enter the cannon of great female singers both in and of the genre. Her vocal performance on tracks like ‘Holocausts’, Murder Most Foul, Paranoid Visions, and Banana Republic is nothing short of thrilling. Tracks like the aforementioned Murder Most Foul and Paranoid Visions demonstrate a band at the height of their prowess, and are typically quite different, the main similarity being Aoife’s intoxicating ethereal scream on both. ‘Murder’ is an intense and atmospheric track, directed by PA’s dramatic post-punk guitars, and Paranoid Visions is an adrenaline fuelled and trashier no apologies account of what make’s them tick,  “So here’s the sound of Paranoid Visions…Opting out is our decision…here’s the sound of alienation, working out our pure frustration.” That not giving a fuck attitude is never more apparent as on acoustic closer Ba-nama Republic, a rousing account of contemporary Ireland delivered in just under seven minutes of vocal bliss. The composition further demonstrates their life long refusal to be compartmentalised, and their continued ability to surprise.

Deko’s lyrics have always stemmed from his own unique source, a cathartic exorcism of gripes and reflections on the world around him. On this new album he sometimes ploughs a more personal furrow, often autobiographical, and revealing, they’re consequently more powerful and resonating. Evident in the aforementioned The Angelus At Six PM,  “Each time I hear, the old bells toll, a terror fills my mind, the memories, still get to me, no solace can I find” and on the defiant Paranoid Visions, “I do this to survive, I just can’t hack the world out there, I’ll do this til I die, with every breath I can spare”. Frustration with conformity and the cyclical nature of society is a constant, whether it’s a genuflecting church goer, or a rat race rusher, his inability to take part in the “Mutant Circus” strengthens the outsider voyeurism appeal of the band, and is empathetically comforting.

Their ability to create diverse arrangements whilst always sounding like themselves remains intact, but it’s more focused, and their production has never been as considered.  New bassist Tomasz and drummer Jay have brought a fresh dynamic to the band, the formers funky bass rhythms on tracks like Paranoid Visions and the Love Buzzesque Anagram Sam, and the latters prodigious percussion which has influenced some heavier tendencies,  sounding free yet meditated, he moves from abandon to precession with ease. Downsizing and honing the vocals has paid dividends, and Deko and Aoife continue to evolve their wholly unique voices. In the past the multiple vocals weren’t as centred, and hadn’t always been successful,  here that’s resolved. The band have remarked before that their unique sound was a result of trying to sound like they sounded to themselves in their heads, this all sounds so perfectly balanced, you suspect now they might have reached equilibrium.

The stunningly multi-layered Cryptic Cross Words heralds a new chapter for these punk survivors. The current version of the band sound unified, passionate and tight. Jay’s unrestrained playing coupled with revelatory expressive, and varied guitar from PA, the studied musicianship of Danny and Tomasz, Aoife and Deko’s career high vocal performances and Steo’s calculated sample elaboration all unify to create a phenomenally brilliant, disparate, yet harmonious record. Thirty three years in, this band show absolutely no signs of slowing down. Anger and vitriol pour from these songs, and the effects on the listener are overwhelming. It’s never sounded so good to be on the outside.

There seems to be a conscious decision to see how far they can take the Paranoid Visions machine, and the production is impeccable. Cryptic Cross Words will more than please the faithful, but there’s no question that it will draw in new fans too. If there are doubters, this post-punk opus has to be experienced to be believed.  Respected on the international stage for some time, this album has the ability to bring them to another level, and get them the recognition they deserve. Lyrically and musically flawless, even the art work is thoughtful and iconic, without doubt one of the best albums of 2015.

Paranoid Visions have several shows coming up in Ireland, the UK and the USA.

Dublin on the 31st of July, Rebellion in Blackpool with Steve Ignorant in August, again with Steve in Baltimore (USA) and Chicago’s Riot Fest in September, with the Exploited in London on the 24th of October, Edinburgh with Oi Polloi in November, and Coitus and Coldwar back in Dublin on November 14th.