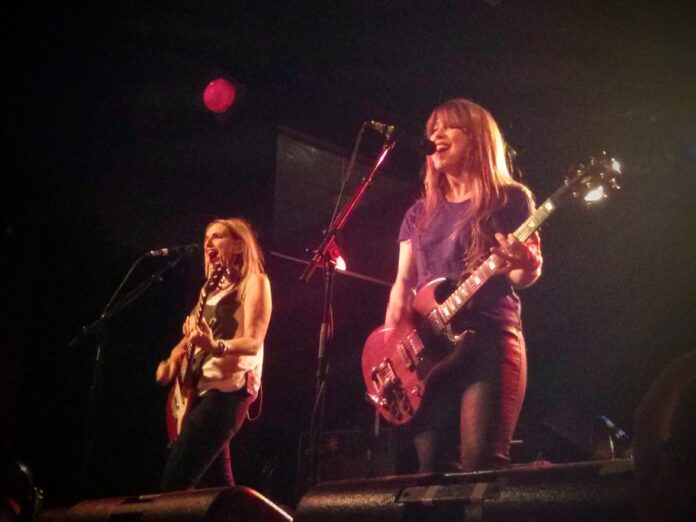 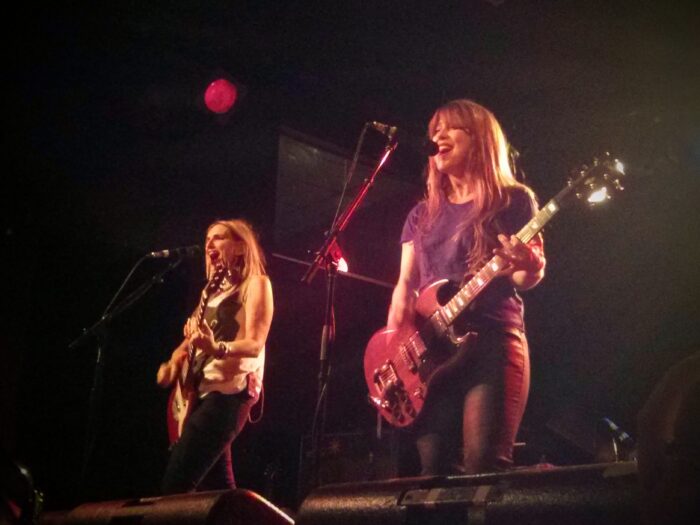 Lisa Sookraj reports back from Veruca Salt’s sold out show in Toronto, Canada.  The latest chapter in the story of a band who reformed in 2012 tells of a triumphant return to form.

Chicago alt rockers Veruca Salt’s 1994 debut American Thighs has sold over 1 million copies worldwide, Their EP Blow it Out Your Ass It’s Veruca Salt (1996) and flawless LP 8 Arms to Hold You (1997) also charted well in North America. They performed in Glastonbury in 1995, supported bands like Hole and Bush X and performed on Saturday Night Live.

They were a gateway band for many fans, like a lot of mainstream mid-90s alternative / grunge bands were. Their penchant for ludicrously evocative and catchy harmonies embedded within edgy rock was hard to resist, their rougher moments striking new-found chords in listeners’ hearts, often playing a part in opening them up to heftier, more complex and abrasive forms of rock.

Though Louise Post kept it real under the Veruca Salt moniker with various lineups long after she and Nina Gordon came to blows over things like cheating, drugs and boys in 1998, it’s clear that something was missing and that something was her petit partner in crime.

Ghost Notes is the band’s first album with their original lineup in 18 years. Unfortunately, it’s shed most of the gritty grunginess that resonated most significantly with some listeners, but the heavenly harmonic vocals and songwriting sensibilities remain intact. The aim is tamer, tidier and poppier, but not to be dismissed with all things considered and leading ladies nearing age 50.

Most importantly, the overall feel of Ghost Notes is still very much Veruca Salt, but in a way that doesn’t force a sense of trying to recreate exactly what they once were, but admirably accepts the band’s present. Certain tracks are, however, aligned with their former sense of self: “Black and Blonde” with its tongue-in-cheek shouted lyrics and sultry swagger, the candy-coated power chords on “Love You Less,” and most of all, the explosively emotive chorus on “Empty Bottle” which is the first moment on the album to arouse the listener just like old times.

Veruca Salt’s current 10-date tour brought them to Lee’s Palace in Toronto for a show that sold out far in advance. The set list was a well-balanced combo of their strongest old tracks and the band’s newest that speak to their return. The set was book ended with new song “Prince of Wales” with its refrain of “I remember that girl,” and their old track “25” looking back to their youth.

Having seen Veruca Salt twice before, I can confirm that they remain tight, playful and foremost, fun as ever. They’re still fitting female rock idols – sincere, blunt and unapologetic. They can croon just as well as they can scream and bang out a ballad just as well as a racing romp, often fusing both into one gloriously climactic thing.

Like others in the audience, despite this being my first Veruca Salt show in 15 years and not having listened to their music in many moons, I still knew all the words to the classic songs and couldn’t resist singing along to the snarls and delicately skilled harmonies.  Fans in the crowd ranged from old to young and even the new songs, released only earlier this month, were recognized. 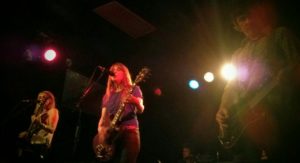 Drummer Jim Shapiro and bassist Steve Lack looked blissed out throughout. The two animated female leads gave their all in skinny jeans and cool T’s; shredding their guitars, bouncing around with their long, straight blond hair in tow. The most moving moments were when the two vixens faced each other for dueling rock outs, lost in sound they fluidly gravitated toward and away from each other, whipping their luscious locks around before breaking the spell to return to their respective mics. 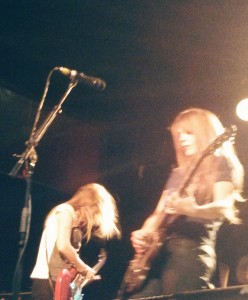 Louise, responsible for the more involved guitar parts and belting out the roughest vocal parts, was more focused overall than Nina, who was clearly thrilled to be back at it, gazing adoringly at her bandmate. When their eyes met, the smiles exchanged were heartwarming and audience and band members alike were elated by their camaraderie.

New tracks like “Laughing in the Sugar Bowl” resonated well live. During the debut of “For Cynthia” everyone lost themselves in the groove and technicality of an extended solo. Switching between the more aggressive and sweeter vocal stylings in Veruca Salt’s trademark manner on “Spiderman” Louise swayed sensually with her guitar, in a cute but sexy, raw yet elegant manner.

For “Volcano Girls” Louise struck some vogue poses before making eye contact with those in the front row and head banging along with them. She started singing the lyrics to “One Last Time” sans music, showcasing the unnerving beauty of her voice before turning the mic to the crowd to capture hundreds of fans’ voices. She said it almost made her cry before launching into the heaviest track on their new release, the American Thighs’esque “Triage” – proving that Veruca Salt haven’t lost their edge. 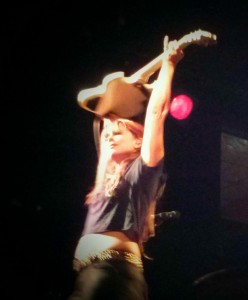 The demand for the encore was enthusiastic, just like it was at shows back in the 90s. The band returned to the stage, Louise and Nina holding hands before launching into one of their highlights, “Shutterbug”, with Louise fluttering her eyes and hands angelically, kneeling on the stage for the final solo and raising her guitar in the air like a rock goddess. During “25” she touched all the fans in the front row’s hands, the band left the stage while Nina played alone for awhile, blowing a kiss to the crowd before walking off.

Veruca Salt exhibited the renewed energy that can only come from a new beginning. They put on a highly appreciated performance with 90’s arena-style showmanship and looked sexy doing it. They made a point of telling the crowd how much they loved them, and the crowd clearly loved them back. I forgot that I was 32 and this was 2015 – it seemed like everyone around me, the band included, felt the same about their age and the time and place we were situated in. And that’s exactly what everyone had hoped for.