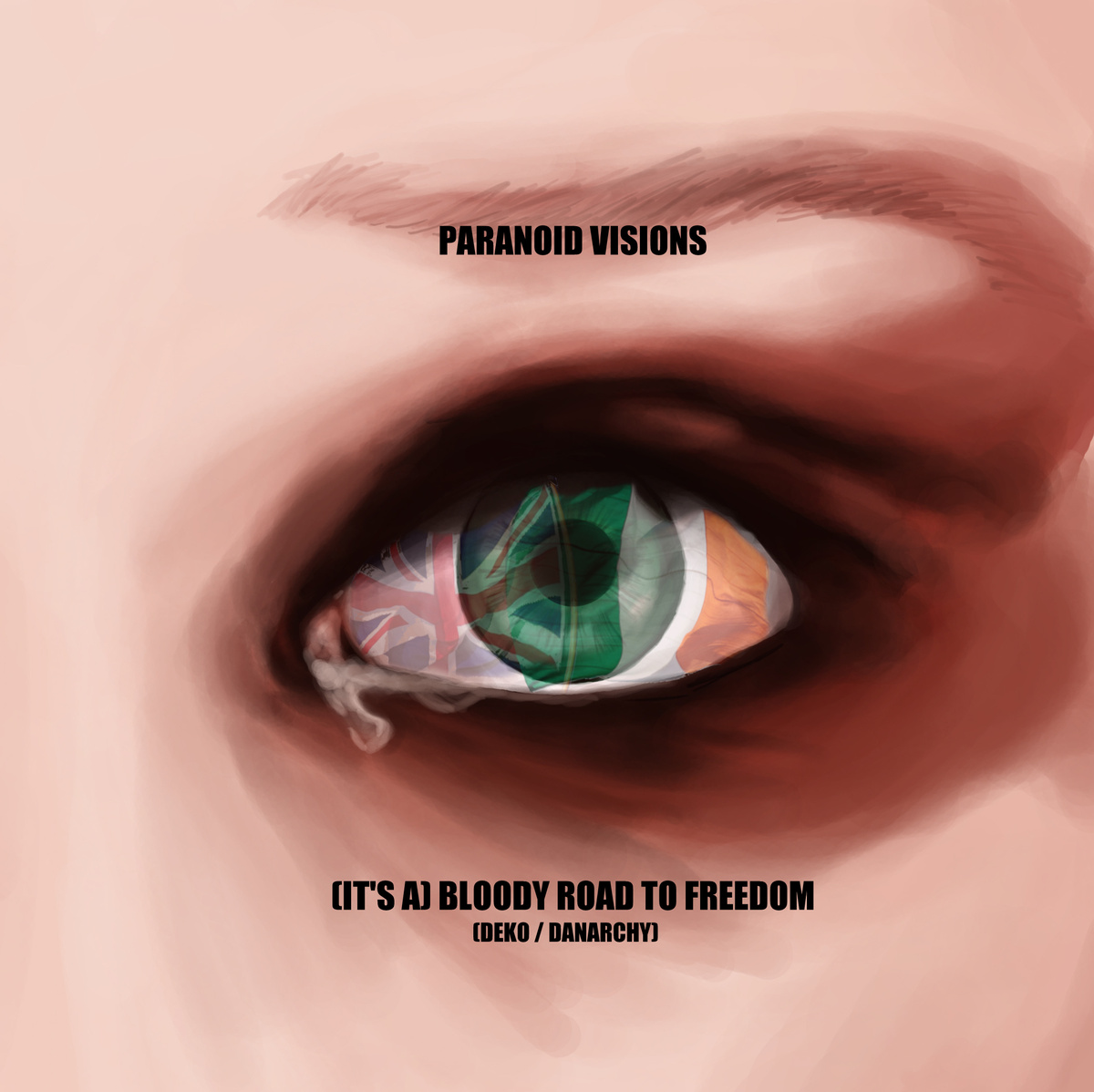 On this new double A-sided single, the band offer us two great tunes. Thematically different, both packing a punch.

Paranoid Visions haven’t been idle since the release of their last long player three years ago. 2013 saw the culmination of a collaboration with Crass legend and Slice of Life man Steve Ignorant with the critically lauded When?… Gigs with and without Steve followed, as well as singles, and a plethora of rereleases. In the middle of all that however, there was a brief period of inactivity albeit shorter than you’d expect considering the band fractured after an appearance in the Netherlands.  Their Rhythm section departed, an exit that also included female vocalist Sarah. This came as a shock to fans, but the long serving punk band is moving forward with enthusiasm.

They appear to be viewing this as a positive thing, a “reboot”. When seasoned members of bands depart, it’s always problematic for fans. There are those who don’t rate The Fall post Steve Hanley, feel Axl Rose’s  current touring band is not Guns n’ Roses, and does Andy Gill really = Gang of Four? With Paranoid Visions it’s not quite Mark E Smith and his granny on bongos, but if PA and Deko are at the helm, it’s fair to say it’s them. Over the last 33 years there have been bust ups and break ups, but they have been the constant.

The departure of former bassist Martin isn’t quite the same as the other two as he had been playing with the band for a relatively short period of time. The other members however have been with the band for a time, and that seven years has been one of the bands most productive, and possibly most popular.

Ex-drummer Paul Price was with the band since their permanent reformation back in 2005, and Sarah Bellum joined shortly after. On visits to the studio, it appeared that Paul played an important role, so his departure was a bit puzzling. But as if to prove a point, on recent live dates they have been impeccable. Whatever the future holds, this definitely marks a new chapter in the Paranoid Visions story,  and this release is a testament to how things will continue.

Two Black Eyes is the first release since the exodus of former members, and it demonstrates a band undeterred by recent fall outs. They sound as forceful as ever. Bloody Road to Freedom is a powerful, scathing attack on the futility of inherited hatred. The production is crisp but avoids the sheen of the nu. The track is precipitated by PA’s sparse piercing guitar, followed by a foreboding harmonising that introduces Deko’s bellowing cry, “In Northern skies I hear the cries…”. The pieces ruminate and create a doom laden atmosphere. The penetrating guitar disappears and reappears throughout over a barrage of components that converge to create a masterfully orchestrated anthem. Stylistically the drumming from newbie Jay Bagnall is different, whether it’s an improvement or not remains to be seen. It certainly suits the composition here.  His relentless percussive symbols fighting for dominance for the duration are especially satisfying alongside the chugging guitars that almost veer towards metal.

It’s easy to gravitate to lyrics in a Paranoid Visions tune, and Bloody Road to Freedom one’s are some of the best. Deko tears through the history of “the troubles” in Ireland, demonstrating every side’s accountability. Recently a fan made light of the band’s history of punning U2, and U2’s recent pastiche of a similar dialogue and the employment of a punk aesthetic.  Bono and co weren’t happy. It was however a totally relevant observation. U2 use the subject as background tapestry to elevate trite,  Paranoid Visions are intertwined in the fabric.

On listening to the aforementioned re-releases, it’s incredible how Deko has a voice left at all, but it’s matured well; mutated, gravelly and  authoritative. Aoife’s voice in comparison has a slight fragility to it, but when it stretches, it has a compelling punky soulful quality. On Bloody Road, she is all expressive emotion when singing “In northern fields, the earth doth scream…In Northern skies, there is no deal…”. Their voices are weaved together skilfully, and rather than sparring for dominance, they enhance each other’s differences, not colliding, but complementing. This is particularly apparent around the middle mark when the tracks slows for Deko’s vocal. He preaches alongside a snappy percussive beat, when a guitar slide beckons Aoife, the vocal delivery strengthening the words.  The lyric conducts the music “…as we wait the next eruption…” and the guitars rejoin, the symmetry is impeccable and goosebumps inducing.

The way their vocals complement each other is further examined on the flips side. Tough Love is a bona fide duet. With three vocalists in the band, things sometimes got messy. There was an erratic beauty, but it could sound confused.  Here there is focus. The full breadth of Aoife’s range is explored, and shines on the harmonies. Aoife has gradually marked out an increasingly important role in the band for herself. In a way, it’s impossible for her to be in the background. The full range of her vocal prowess is becoming more apparent on every release, and never more so than on Two Black Eyes.

PV have always been prepared to “fuck with the formula”, but the arrangement here is an unanticipated deviation to a pop aesthetic that hasn’t been trodden before. In typical form it works. A sharp hook and chorus juxtaposed with harrowing lyrical content. It creates an unsettling feeling, while remaining infectious. The melody is upbeat, but the tale the total opposite. The past thirty three years have clearly offered no shortages of subject matter. Deko writes as if it was going out of fashion, a compulsion to release anger. Here it is wizened voyeurism, a commentary on the scenes you sometimes get flashes of on the streets, or in the dark corners of bars. Scenes that play out a whole lot worse behind closed doors. PV might appear to not give a shit, but they often wear their heart on their sleeve. Older tracks such as  Strange Girl, Strobelight and Torture, and Sex Kills all demonstrate that.

The extra (downloadable) live tracks recorded with the new line up are worth the price of purchase alone. Taken from a show in Belfast from earlier this year, they showcase a band at the height of their live prowess. A total of three live favourites, the recent, Braindance, and two well worn classics that sound as fresh as the first time they were recorded, Newtownism, and Asleep at the Wheel. The recording is solid, and the performance extremely tight. The tracks are produced well and perfectly capture that raw intensity of a live Visions show. The choice of tracks feels like an exorcism of sorts, with other live versions of the same tracks having appeared on single b-sides over the last few years. It’s as if they are drawing a line in the sand  to divide the past from the present.

Two Black Eyes affirms they intend to march on without nostalgia.  The previous line up accomplished much in the last decade. During their tenure they’ve released five studio albums, best of’s, re-issues, countless EPs and singles, but Paranoid Visions aren’t a band to hang around, and that’s refreshing. You always get the impression that the next release is being worked on as soon as the new tracks hit the production line.

Two Black Eyes is a wonderfully diverse double A side that tackles social connection, anti-war, love and relationships. It makes you consider these themes through the subversive Kinetic delivery we have come to expect from Paranoid Visions. On Tough Love the band have attempted and achieved something new and Bloody Road to Freedom is proof that after 33 years they are still  writing some of their best tracks. An incredible feat.  The band promise that the upcoming LP Cryptic Cross Words will be as equally diverse, this might cause trepidation for other acts, but Paranoid Visions thrive in a constant pulsating state of evolution.

October 24th, PV, w/ The Exploited, Discharge, The Defects, and In Evil Hour, the Forum, London.

All words by Ray Burke. More writing by Ray on Louder Than War can be found at his author’s archive.