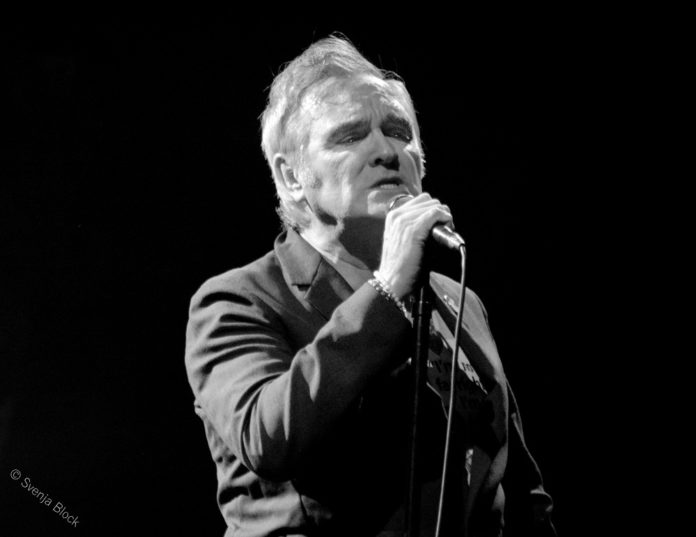 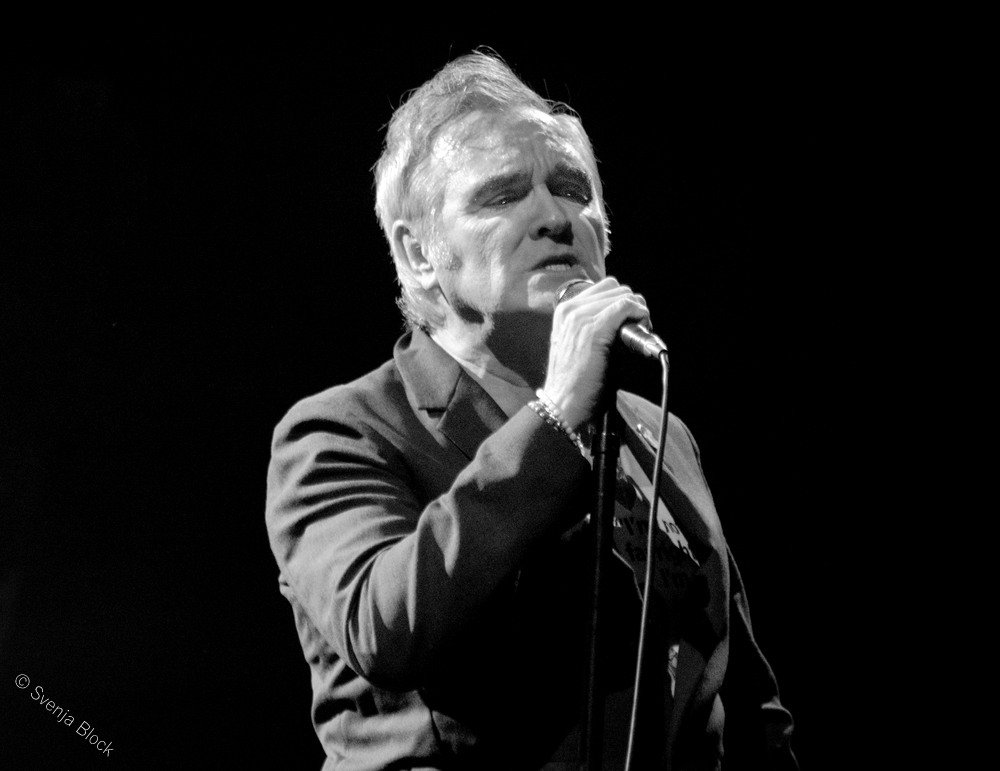 Louder Than War writer Phil Ross and photographer Svenja Block risk pestilence to peer into the soul of Morrissey, one of music’s most perplexing personalities.

Svenja and I have been talking about Morrissey for some time now. While I love his music and loved The Smiths, I’m torn. Can I separate a ‘terrible man’ from his beautiful art? Our conversation started a few months ago. We interviewed Bid from The Monochrome Set whose view was that the creative part of Morrissey’s brain operated separately from the part that was prone to “spouting rubbish”. One of Svenja’s friends has been diagnosed with a mild form of Asperger Syndrome, a disorder characterised by difficulties with social interaction and repetitive behaviour. Her friend is adamant that they recognise aspects of their condition in his behaviour.

Since his first bookish appearances wearing NHS glasses and a hearing aid, Morrissey has always been a focal point for the shy and the socially awkward. His dark, crooning poetry about bleak, rainy Manchester accompanied by happy, jangling guitar elevated The Smiths above the goths, punks and new romantics of the early 80s. The dreamy and the depressed along with the bored, the inquisitive and the angry flocked to them and their strongly anti-capitalist, animal rights stance. Throwing armfuls of flowers to audiences wearing garish necklaces, shirt open to the waist, and apparently celibate, Morrissey was a figurehead for the forlorn, the sexually uncertain and ambiguous. It was a broad church and the band became an international phenomenon. He would go on, not only to become a chart topping solo artist and a gay icon, but one of music’s most contentious figures for his apparently racist, right wing views.

So it’s this conflicting shopping basket of facts, memories and opinions that I carry along to Wembley with my notepad and pen, and the hopeful but honest intention of distilling some true essence of the man from tonight’s show.
I leave Svenja at reception with the other photographers and make my way to the opposite side of the hall. It’s not going to be so busy we have heard, and whether this is due to people staying away because of the Coronavirus or whether ticket sales have not gone well is hard to say.

Along the way I stop at a PETA stall with badges and leaflets, where two teenage women are explaining Morrissey’s stance against animal abuse and his support of their work for the ethical treatment of animals. Suddenly a man in his fifties or sixties rushes toward their table in short shuffling steps, slams down a briefcase and pulls it open. “All here, all here, yes, yes, all here, all here” he repeats as he rifles its contents. His fringed, dyed hair is bowl cut, he wears thick glasses and a vintage tweed jacket and waistcoat. He repeats the phrase again, looks up to inspect us, blinks, turns and shuffles off again at speed, briefcase clenched tightly under his arm.

I hadn’t really thought about what kind of crowd to expect tonight. As much as I love the music, I’ve only seen Morrissey live once, and that was The Smiths in 1984 at the Queen Margaret Union. It was mostly teenagers like me. There was a concerted effort at that time in Glasgow venues to throw out punks and people moshing too hard. The band had filled the stage with dozens of boxes of flowers, mostly gladioli and daffodils, which Morrissey threw liberally throughout the show to the crowd, who grabbed and jumped for them excitedly. Ironically, in my excitement to grab flowers, one of the quintessential symbols of World peace, I got into a fight with a guy in an open shirt and black plastic specs, and found myself bruised and ejected out the side door with some other punk kid. We grinned at each other and went our separate ways, daffodils in our back pockets.

It’s a similar mix tonight, no one has changed, just got older. A few goths, punks, teds, trannies, the whole gamut of 70s and 80s subcultures, gay and straight. There are plenty of young people, many of them with their parents, male and female. But the vast majority are pretty identifiable in my mind as Smiths/Mozza fans. Very white working class. What does surprise me slightly as I mingle, is that I feel acutely aware of a sense of the socially awkward. 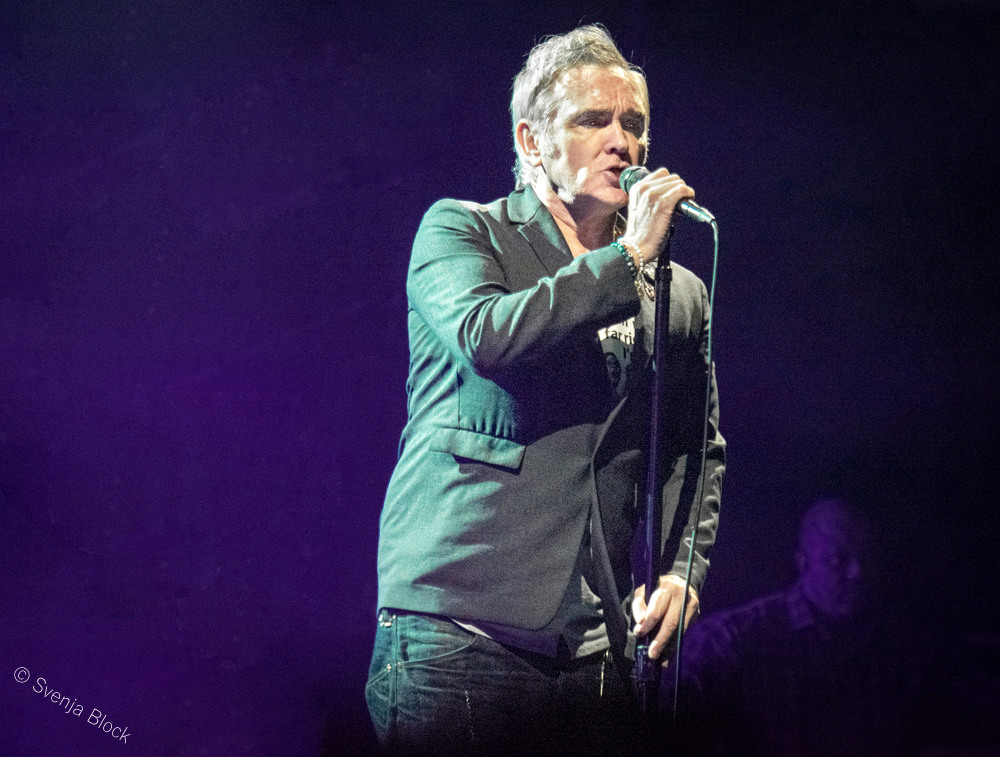 There are no support bands tonight. Instead there’s a half hour video collage. As it starts, I assume that Morrissey himself curated the video show. He would have at least had the final say. I wonder if it’s more than just a collection of his influences, but an unintended blueprint of the inner workings of the man.

It may be fanciful and I’m probably overthinking, but did the scenes from Bela Lugosi’s Dracula and Harold Pinter’s The Guest represent isolation and instability? Did the Ricky Wilde and Lou Reed tracks represent alienation? Interspersed between each video are images of James Baldwin the civil rights activist and gay writer, who re-entered the public eye recently in the Oscar winning 2016 documentary I am Not Your Negro. The imagery is relentless: Dee Dee Ramone’s obsession with Nazism, a drag queen ranting about nationalism, Sam Cooke with white backing singers.

Hong Kong Garden, the Siouxsie song about a Bromley Chinese takeaway – I’m sure he’s having an unrepentant laugh at the furore he created with his “subspecies” attack on the Chinese about their animal welfare record. Is it only me who saw this collage as Morrissey talking directly to his fans, telling the world exactly who he is, and giving us an insight into his crazy mixed-up belief system? The collage draws to an end and the growing football chant of the crowd swells to a hearty cheer. The band take to the stage as he croons the haunting Skeeter Davis number The End of The World in his distinctively, dreamy high baritone. He looks tired, his clothes are crumpled, his untrimmed hair seems greyer than it should be. His voice quavers a little on the line “end of the world”, he coughs and a new back projection appears which reads ‘Morrissey, you are the quarantined’. Whether this is due to his views or the virus is cleverly up for interpretation.

In reality, an artist playing Wembley Arena should have sold out six months in advance. Some people will have stayed away tonight because of Coronavirus, maybe 10 per cent, the complete lockdown mentality has not taken full effect. The truth is the tickets struggled to sell and it’s half full tonight. They play The Smiths’ London. 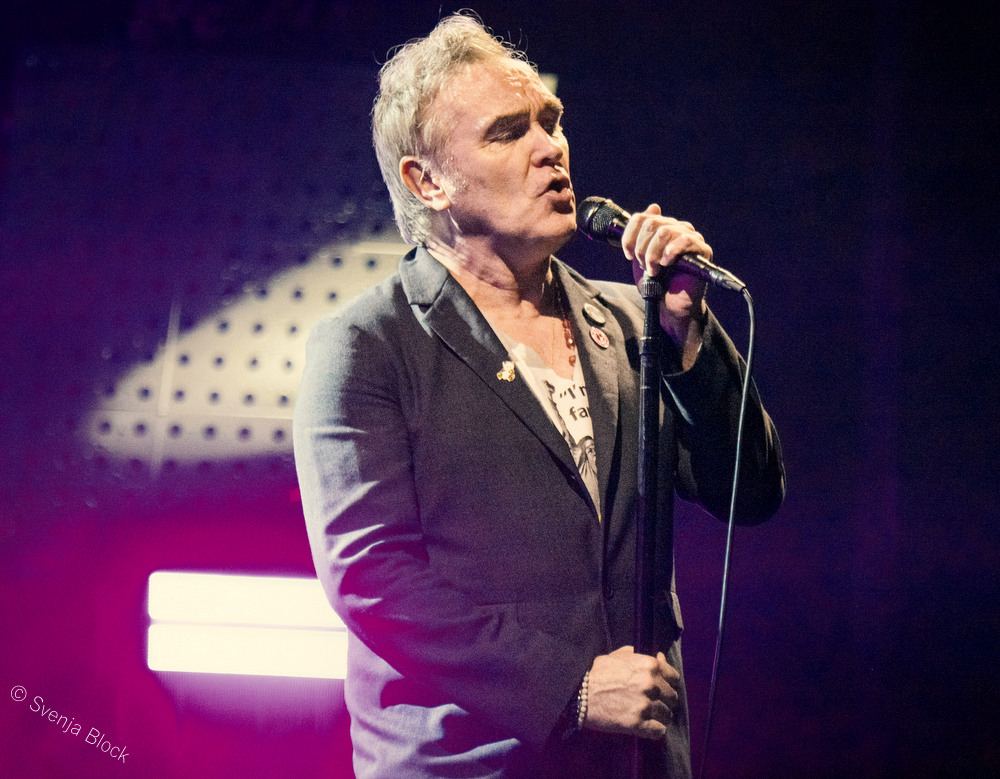 The backdrop changes to a collaged image of a mounted policeman wielding his truncheon at Lesley Boulton, it’s a well known image from the Battle of Orgreave. Tonight Maggie Thatcher has been photoshopped in place of Boulton.

The delivery of I Wish You Lonely is highly emotive as he sings “Tombs are full of fools who gave their lives upon command of monarchy, oligarch, head of state, potentate” telegraphing his working class roots. Next Jim Jim Falls the single from his new album, I’m Not a Dog on A Chain, is a seemingly unsympathetic piece of advice, “If you’re gonna kill yourself, then to save face, get on with it”.

Advice perhaps for himself or a third party, I don’t know but it is of course exactly the driving, catchy formula with jangly guitar and the quirky lyric that he excels in. His voice seems to struggle and break in places throughout the night, and I wonder if it will hold out. “Thank you” he croaks, after I’ve Changed My Plea to Guilty. Three times he repeats this, wiping sweat and straggly hair from his brow. And then as the band plays the intro to Home is a Question Mark he says “Yes”. He repeats it a couple of times, changing the stress and tone. He says “Yes” very fast, about seven or eight times before it cascades into “Da da da da da”. I think about the bespectacled man at the PETA stand.

His voice is inconsistent, fluctuating from astounding to rasping. The vocal on If You Don’t Like Me, Don’t Look at Me is absolutely resplendent. At times he stumbles around the stage, occasionally he moves with the momentary balletic poise of a younger Morrissey. As the final bars of Wedding Bell Blues play out, he omits the beautiful bluesy ‘Oohs’ of the album version. Instead he chants “Ch, ch, ch ch ch” as if conducting the band for the wrong ending. They quite rightly ignore this and finish together. “Vodka” he shouts as the final cymbal crash fades.

Overall though, tonight’s show is splendid and the vast majority of fans will be delighted, but there are cracks. Pulling your jacket over your head is cute when you’re twenty and on Top of The Pops, but when you’re sixty? I’m not so sure. I really didn’t want to see the belly and the ass crack.

The encore is Irish Blood, English Heart, up there in my top Mozza songs, and I feel the goosebumps rise on my scalp as the guitar intro chugs to huge back projections of Oscar Wilde. After singing the phrase “Standing by the flag” he inserts the word “Never” before “Racist or partial” while wagging his finger reprimandingly. “Never racist”. He longs for a time when the English are not destructive. Patriotic yes, but “never racist”. Morrissey may well be socially awkward, like many creative people. But he’s not stupid. He has walked a thin line courting controversy and the uglier aspects of human sentiment. He knows exactly what he’s done and he’s made a very good living from it. His problem is that he has lost a lot of income and audience, and I’m sure he won’t enjoy being categorised under “racist cunt”. Is someone racist if they don’t realise they are being racist? If they realise they are racist, is it possible for them to reform?

Tomorrow he may be different, but tonight I think he was trying to take the first step towards rehabilitating himself. But it will need more than clips of James Baldwin. Perhaps Morrissey could self isolate and communicate strictly via the medium of music or art or video where he has the opportunity to craft his words more carefully. On reflection, after the show, I give him the benefit of the doubt that 1992’s National Front Disco was merely an observational poem about David, a young man drawn to the racist element of English nationalism. But was David actually Steven Patrick Morrissey?

Morrissey’s new album I AM NOT A DOG ON A CHAIN  will be out March 20 and is available for pre-order now.

All photographs © Svenja Block. You can find more of Svenja’s photos at her Website, Facebook and at her Louder Than War author’s archive.