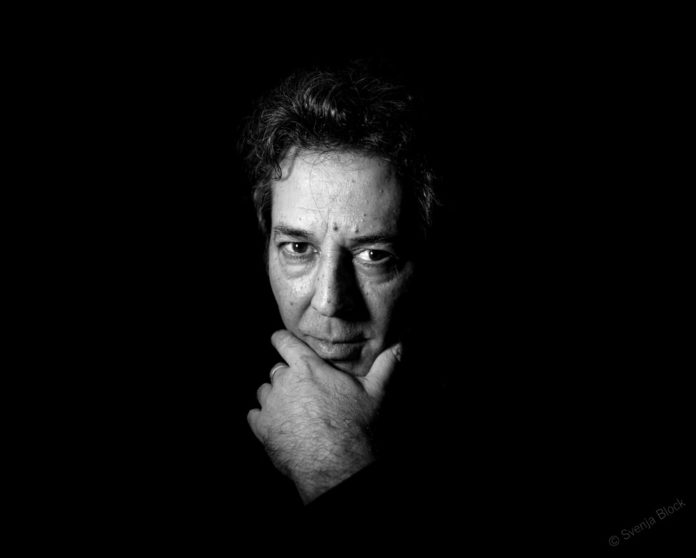 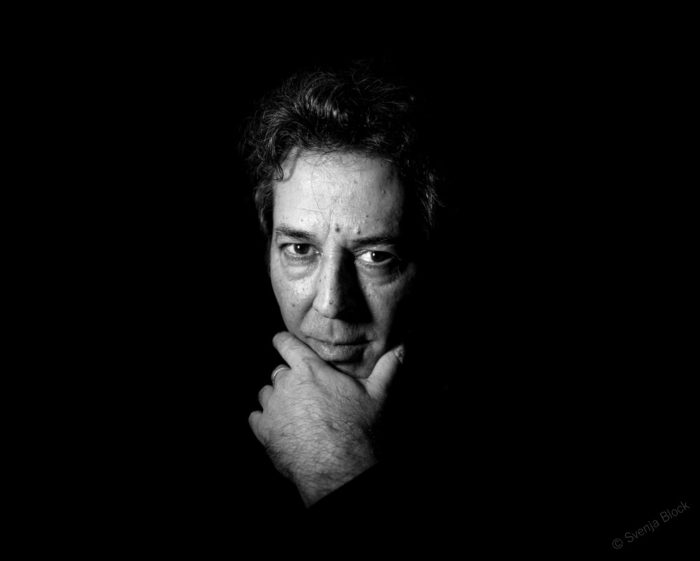 Hear my words carefully.
Some are spoken
Not by me, but
By a man in my position.

The autumn sun shimmers on the leaves of the tree-lined avenues of Streatham Hill, as our faces search its diminishing warmth.

The late flowering blooms lining the paths and gardens also look upwards straining for its warmth while, sensing the cooler air, our subconscious self braces us for winter.

Bid, the singer, writer, producer of The Monochrome Set came to this South London suburb as Ganesh Seshadri from Calcutta via New York and Montreal in 1965, the son of an Indian engineer father and an English American art teacher mother.

A slender man with slightly wild hair, and dark, questioning eyes, he smiles warmly as he opens the door to his first floor flat in a turreted, semi-detached Victorian house. It’s a rich, glittering Aladdin’s Cave of creativity with books, plants, music and writing materials. Ornately framed art, prints and sketches ranging from Vermeer’s Girl With a Pearl Earring to Enki Billal’s Nikopol adorn all available wall-space of his front room.

In the corner is a computer station where he edits The Monochrome Set’s website, videos and does much of the band’s management.

His actual songwriting is done exclusively with fountain pen, “Because of the way it glides”, always on lined paper and often with different coloured inks; greens, reds, purples, greys, “Grey can be particularly beautiful.” He draws from a large pot of baccy on the dark wood coffee table and rolls one up as he talks. 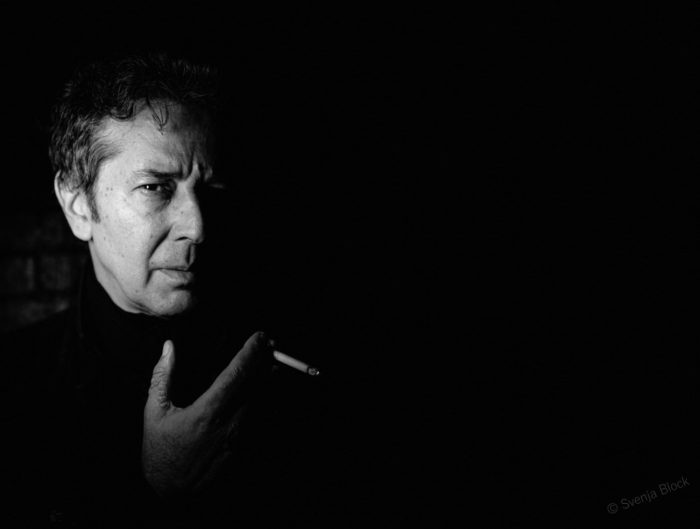 “There have been so many lies in the press about Morrissey, it’s hard to know what’s true and what’s not.”

It’s well known that both Morrissey and Marr were greatly influenced by The Monochrome Set, and the conversation has strayed early onto the subject of whether it’s possible to continue to like his music when the man’s utterances and politics had become so unpalatable to so many.

“But yes, I think it is” Bid explains, “Maybe he’s not aware that he’s not the one who wrote those beautiful melodies and haunting lyrics. There’s something inside that takes over. Creativity comes from that primal part of the brain and it cannot be affected by immediate emotions, it’s detached. I think if you’re a writer, deep in the core you know this, it’s like a vocation, it’s not you.”

Bid ascribes this realisation to the brain aneurism he suffered in 2010; “I was standing, just in there”. He motions towards the neat and colourful kitchen where he takes his cooking seriously – sourcing varied ingredients from the local high street, which, with its interesting and diverse range of shops – Turkish, Polish, Pakistani – reminds him of Brooklyn.

“I was cooking and I felt this burning pain in the back of my neck, which was the blood spurting down my spine towards my bum”. His eyes flash wide, alive, he is almost incredulous, but serious. “Depending on where you are, there’s a 50-50 mortality rate with an aneurism in the head. When an artery in your brain explodes, blood shoots into the brain, and can cause a lot of damage. I was lucky that I was standing, I held onto the side, and the blood went downwards. I puked and I went to lie down and when I woke up, I called my wife and said ‘something weird just happened.’ I was also lucky because my wife took me to St George’s in Tooting our local hospital which just happens to have one of the largest neurosurgical units in the country. They knew just what it was and exactly what to do.”

He takes a moment to gather his words, “This is where Platinum Coils comes from,” the 2012 Monochrome Set album. “It used to be they’d crack open your skull to treat a blood clot. But now they go in through the artery in the crotch, all the way up and put a platinum coil in your brain to stop the blood clotting. It’s called ‘Coiling’. Neil Young had it done, one of the early procedures and it didn’t work, and they had to do it all over again. The largest ‘at risk’ group are women in their thirties, Joni Mitchell had one too, though she’s wasn’t in her thirties.”

Taking the slightest of pauses, Bid laughs, “I was lucky, it worked well for me, but a little bit of my brain was damaged, it still is. I had to re-learn so many things, re-programme my brain.”

He re-lights his roll-up and returns to his previous train of thought, “And this is what I’m saying about Morrissey; I was sitting writing when I suddenly became very confused, I didn’t know what my hand was doing or really where I was for a time, but I didn’t stop myself. I allowed my hand to continue to write, completely unaware of what was going down onto the paper. And the next day when I read what my unconscious had written, there wasn’t any discernable difference from what the conscious me usually wrote.”

He throws his hands up in a conclusive manner, “So yes, maybe he’s not aware he’s not the one who wrote those beautiful songs, not his conscious self anyway. Perhaps he thinks he’s a genius but that creative creature inside him probably isn’t interested in what he’s spouting.”

“Like when I speak about Brexit, it’s a different person. I’m in a band, I’m in a certain position so I’m often given a platform to talk crap which perhaps I really shouldn’t be. It’s like the ‘master to the butler’ type relationship, the creative self to the conscious self, like a director and actor.”

“Once you recognize that creature inside you, you can relax and let it create. You cannot instruct it to come forward, you can suppress it yes, but you are not in control of it, no more than the butler is in control of the master. I am the butler” again he laughs, pauses. The large pot of baccy has disappeared, he takes out a pack of cigarettes, and lights one.

On the subject of Brexit, it seems somehow poignant that in our current age of ‘post truth’ the new album is entitled Fabula Mendax, a Latin phrase which means ‘Lying’. Bid seems back-footed by this suggestion, but eventually he grins “Yes, perhaps I haven’t been totally honest with the band about the concept.” 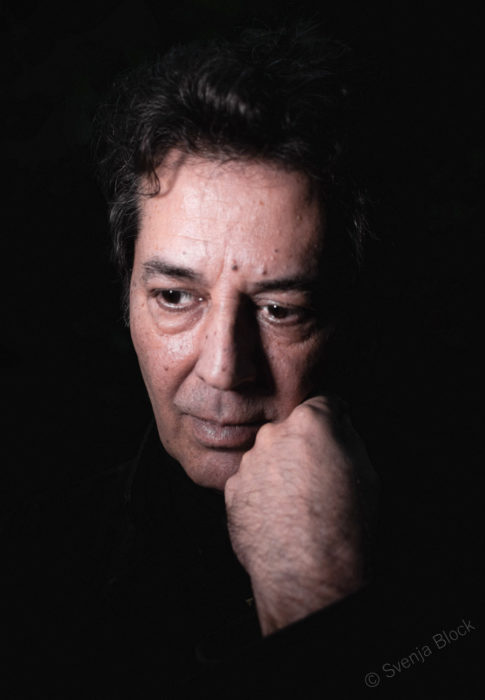 The Monochrome Set’s press release states that the album is based on 15th century manuscripts written by a companion of Joan of Arc called Armande de Pange, and her adventures after leaving her unhinged family, being caught up in the chaos of The Hundred Years War before eventually becoming part of Joan’s band of followers travelling through war-torn France. Gripping stuff indeed, and a fabulous idea for a concept album that could easily sit alongside Ziggy Stardust or Jeff Wayne’s War of The Worlds.

Interestingly, there’s nothing on the internet about any real-life Armande de Pange.

“My wife is from near Metz on the French German border near Luxembourg, one of the oldest families in the region” he responds. “There are so many manuscripts and documents in old churches and monasteries”, he is emphatic but then evades the question as to whether he has seen these actual manuscripts himself. “So I’ve felt I had to be increasingly autocratic with the band, to get things done. Too much discussion doesn’t work when everyone is a writer, the band ends up splitting up, decisions can never be made.”

And indeed the re-formed band has been hugely prolific since Bid recovered from his aneurism, freed of certain constraints, releasing six new albums since 2012, almost one a year with regular touring.

“But they played really well.” Bid a West Ham fan, sounds for a second like a football manager. “Andy or Mike might say, ‘turn up the bass’, or ‘turn up the snare’ and I’d say ‘Why, what for?’ Other musicians see the voice as another instrument, but people want to hear what is being said. I am in the band but I’m also the producer and, you know, sometimes things get cut, like a sequence in a movie gets cut, because the director is creating, looking at the whole thing. I’m sixty one, I’ve got probably only got nine more years, and something inside me understands what I’m doing so I don’t really give a fuck.” 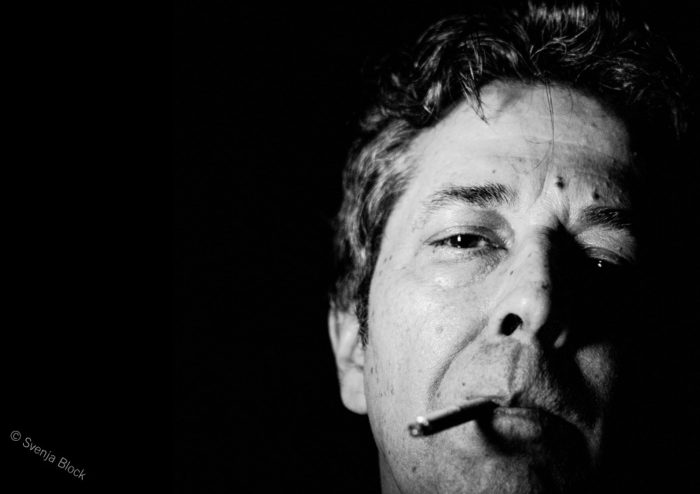 He stops for a second as the cigarette smoke rises in a single plume mingling with the sunlight streaming through the window onto his pensive expression. “Mike Urban our new drummer is a great player, and he really knows his 60s and 70s music. We had a conversation in the recording studio about Jimi Hendrix’s drummer and his style, and Mike knew him and knew what I was talking about, he’s fully engaged, I really like that about him.”

Bid reflects momentarily, “I could sense that Steve (Brummel, the previous drummer) wanted a normal life, he got a girlfriend and I was taking up a lot of his time, they got married and in the end he was giving me about ten free days a year. I had this well-paying gig in Vienna confirmed and she called me up to say she had a secret holiday booked. So I had to cancel it, it got more and more difficult.”

He compares The Monochrome Set’s recent renaissance to an amateur team that’s found itself in a higher up league; “You have to take it seriously,” he concludes, before a fonder recollection takes him back to The Smiths.

“It was Steve who told me what Johnny Marr said. It was after we’d played at some weekender festival, in Bognor I think. I’d left after we played but Steve hung around and got into a chat with Johnny who told him ‘You wouldn’t believe how much guitar I nicked from Monochrome Set’, well I listened and listened and I couldn’t hear it, but hey, there you go!”

He pauses again for breath.

“And so yeah, perhaps Morrissey is responding to people’s adulation, but it’s not him doing the creating, it’s something inside, something he’s not aware of.”

Bid looks upwards through the window towards the late afternoon sun. Both he and his subconscious self have so much more to do. 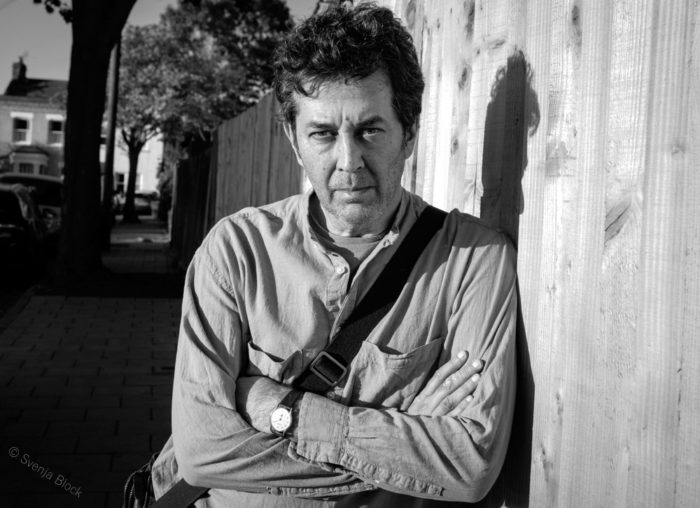 Fabula Mendax is released on 27th September 2019 on Tapete Records and the band can be seen live at the following upcoming shows: