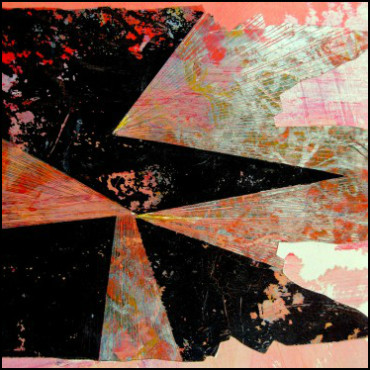 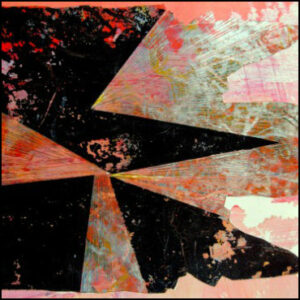 Seven albums in, the windy city’s finest avante-jazz provocateurs are still hurtling towards the outer reaches. Louder Than War’s Paul Margree dives in.

The Chicago Underground Duo is Rob Mazurek and Chad Taylor. Since 1997, they have been making music that hoovers up music detritus from just about anywhere – frenetic post-bop rhythms, spare, melancholic horns, melting synths dragged kicking and screaming from Detroit, and chunks of musical tradition purloined from across the globe – to create a marvellously disparate and funky stew that’s good for the feet as well as the head.

Locus is their second album for Northern Spy Records following 2012’s Age of Energy and their seventh in all, and by heck they’re revved up and raring to go. From the shards of jagged synth that strafe across the opening seconds of the title track, through the sheet metal battering of House Of The Axe, to the crashing piano and mutant synth guitar cornet hybrid whose screeches bring the album’s final track, Dante, to a close, there’s not much let up.

The fact that both of Taylor and Mazurek are involved in a brain boggling array of other projects – cornettist and synth hander Mazurek in the Exploding Star Orchestra, Pharoah and the Underground (alongside Pharoah Sanders) and the São Paulo Underground, and percussionist Taylor in Marc Ribot’s Spiritual Unity, Iron and Wine as well as his own band Circle Down (to name but a few) doesn’t seem to have dampened their energy either.

This is a fizzing, bustling album, with Taylor’s restless and propulsive grooves at its heart. Boss is a fine example, Taylor playing thrash bop in double time, snares popping like gunshots as Mazurek’s keening cornet picks a melodic path through the cracks, a cat picking its way across broken glass.

Occasionally Taylor layers his drums with various bits of percussion and sound making devices to give added texture to his beats. On Yaa Yaa Kole, his chiming thumb pianos combining with Mazurek’s chunky afrobeat horns to create a hustling retro jam. Kabuki gives the thumb pianos a leading role, their bubbling, distorted lines reminiscent of the frenetic grooves of Congolese maestros Konono No 1.

There are a few quieter moments. The Human Economy is Boss’s haunted twin, a rumbling ambient soundscape that is unsettling rather than tranquil. Borrow and Burry works less well, its aluminium scrabbling a poor pastiche of the European free improvisation sound – although its metallic drones and strange, wordless vocals almost do enough to lift it it into a different and weirder place altogether.

All in all, however, Locus is a fine piece of work, its disparate nature given a kind of coherence by fellow Chicagoan Jon McEntire’s superb job as engineer. With all their other stuff going on, I don’t know how Mazurek and Thomas find time to create an album of such fractured beauty, but they’ve managed it somehow for this magnificent album. It’s been fifteen years since the duo’s debut record but there are no signs of them running out of steam yet.