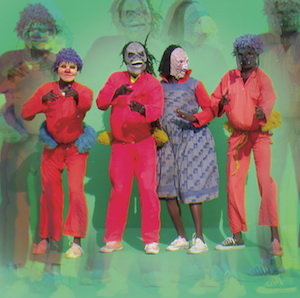 After reading & enjoying the ‘œI wandered lonely as a Baile Funk fan’ by Sapna Sanghvi last week I was reminded of Shangaan Electro music, a kind of music that first came to my attention earlier this year when a compilation appeared on the long running & ever wonderful Honest Jon’s record label.

The album was released to coincide with the world cup. I suspect when most people reflect back on the  world cup from a musical reference point they will either think of the vuvuzela horn (or ‘f**king vuvuzela horn’ as I believe it became known to everyone who wasn’t honking on one) or maybe of Shakira’s world cup song. The more musical clued up amongst them might also recall K’naan’s original ‘Official World Cup Anthem’ (which seemed to be forgotten once Shakira recorded her world cup song) & have cause to reflect on how his fortunes have changed from his infamous early years as a child soldier.

For me, though, world cup 2010 will now forever be linked musically with Shangaan Electro, as showcased on the ‘€œNew Wave Dance Music From South Africa’ compilation. I’m pretty sure the album was going to be released with or without the world cup, but whether or not it would’ve come to my attention without the world cup & the ensuing focus of the world’s journalist’s on S Africa is doubtful.

Shangaan Electro’s â€Ëœthing’ is that it’s fast. Really fast. It tends to rock along at about 180 bpm at the very least. Typically soul music’s 80 bpm & dubstep lollops alongÃ‚Â  at 140 bpm. It has other €’œthing’s’ as well of course. It  essentially grew out of the townships though is now as likely to be heard in both urban & rural regions. It is a blend of more traditional instruments such as the mbira, with newer instruments, typically built from cheap midi keyboards. The accompanying singing curiously mimics the instruments in that it lilts between more traditional African sounds & a kind of distorted yelling. It’s seriously happy music. I’d defy anyone not to watch it and smile.

The other thing I’d defy anyone to do while listening to Shangaan music is dance. Or want to dance anyway. Shangaan’s raison d’atre is to make people dance. Apparently if it wasn’t so fast people just wouldn’t dance to it. Which I find find a tad strange as, until I checked it out youtube, I couldn’t begin to imagine how anyone could dance to music so fast. It involves hyper fast footwork, some serious hip shaking & quite a bit of play acting. Oh, and dressing up. Like I said, it’s fun.

There are lots of  clips up on Youtube ofÃ‚Â  Shangaan Electro. Here’s a couple:

If you want to buy the album, compiled by Honest Jon’s boss Mark Ainley and former Basic Channel member Mark Ernestus, you can pick it up directly from Honest Jon’s at the link below. You can also download individual tracks from them for just 50p a track as well.

Also by clicking the below link you can find a piece of writing from one of the leading players in the Shangaan scene, Nozinja, which is well worth a read. Obviously if you do read the article & see anything familiar there to the piece I’ve just written here, it was me cribbing off him & not vice versa. I probably didn’t need to say that.

It’s been a really good year for what’s nebulously referred to as ‘World Music’. Here’s a selection of some the best. In no particular order of course.

All words by Guy Manchester.