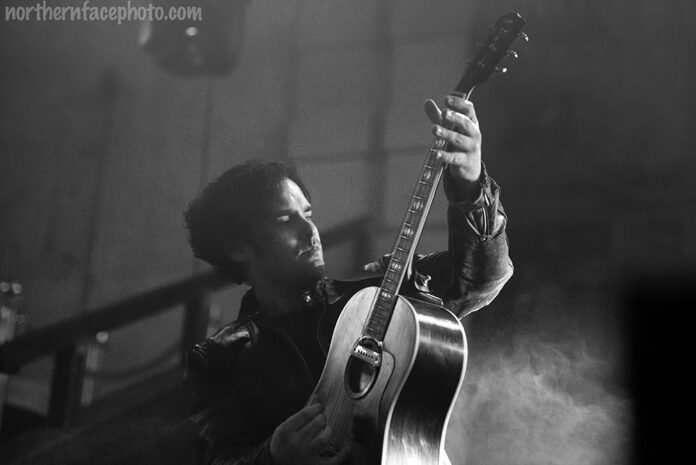 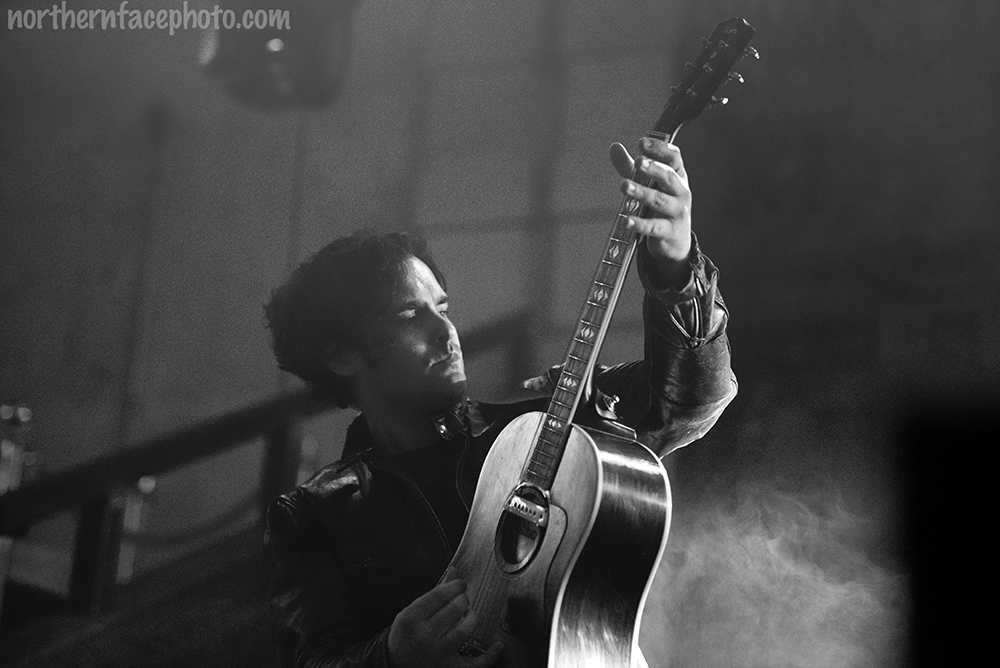 Black Rebel Motor Cycle Club hit Manchester during the UK leg of their world tour with a storming performance at The Albert Hall, Manchester. Nigel Carr (words) and Dave Gleave (photos) were there to capture the event for Louder Than War.

It’s been a busy few weeks for Carl Barât, working on the Libertines new album in Thailand, arriving by helicopter at Glastonbury to perform a secret gig with Pete Doherty and the rest of the band, then rushing up to Manchester with The Jackals to play a support slot with B.R.M.C. 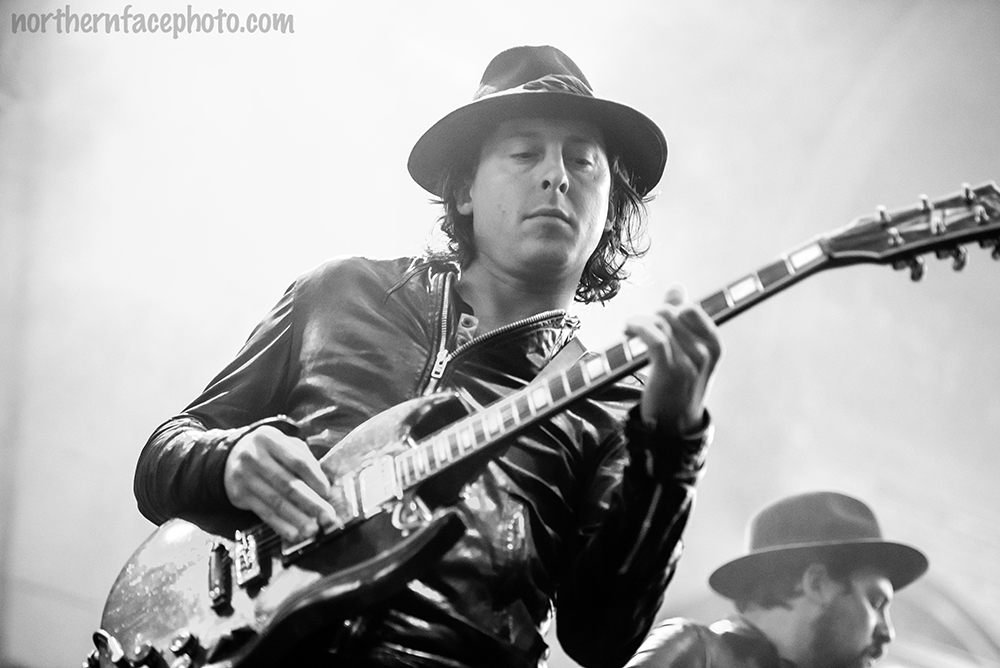 They kick off just before 8pm which is early for a band to go on stage especially in high summer and the daylight streams through the stained glass windows of this glorious Victorian hall. Unusually you can see every detail in the place, from the huge church organ at one end with its sky high brass pipes to the faces in the crowd clearly picked out below.

Carl Barât and his Jackals storm the Albert Hall with an incendiary performance of tracks from their recently released début album Let It Reign, as well as the old Dirty Pretty Things number; Gin & Milk. This is a high octane, knuckle duster display of rapid fire punk majesty. Each track thrashed out like they mean it – a bare chested Jay Bone literally hammers his drum kit into submission while Barât attacks from the front spewing his leather clad glory over, well, frankly a rather subdued and indifferent audience.

It’s pretty clear who this crowd have come to see and apart from one or two die hard fans at the front it’s a low key and totally underrated affair, despite the incredible pyrotechnics on the stage. 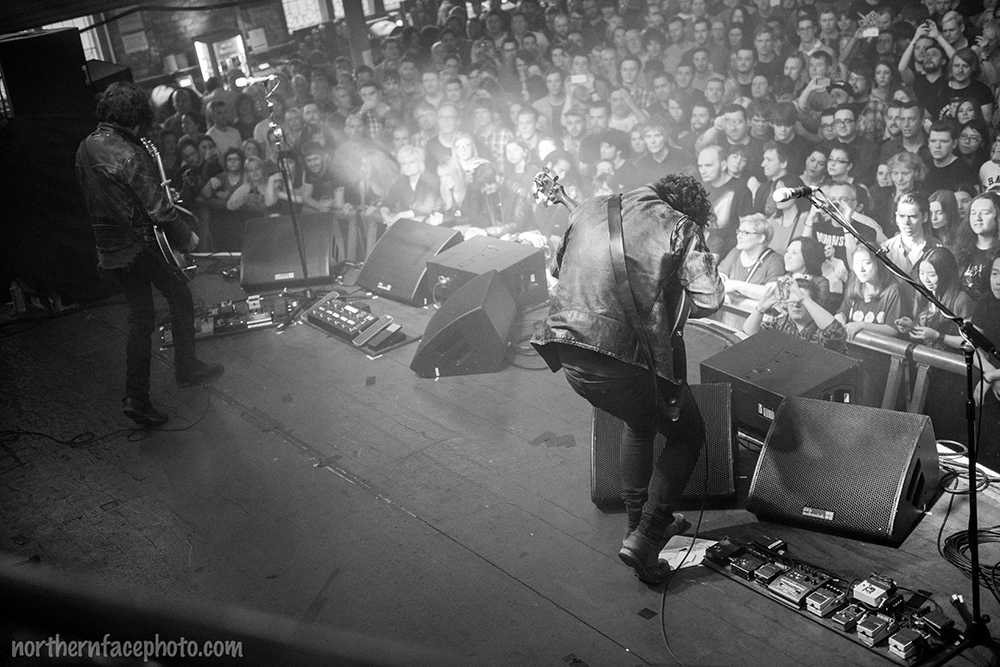 Black Rebel Motor Cycle Club amble on to the stage amid plumes of dry ice and the loudest of drones you have ever heard in your life and I swear they’ve cranked that big old organ back to life! – it’s a huge, ear splitting noise that shakes the very foundations of this big old building. They break in to the title track to 2010’s Beat the Devil’s Tattoo and the audience immediately sparks in to life in recognition.

“They deliver the set at volumes that would have your granny running from the building screaming.”

This is grimy rock and roll at its finest; The MC5 meats The Jesus and Mary Chain with a bit of hill-billy swamp rock thrown in for good measure, and they deliver the set at volumes that would have your granny running from the building screaming. For a three piece they weave an incredibly tight sound with the two front men, Robert Hayes and Peter Levon Been positioning themselves either side of the stage, frequently swapping over and alternating between bass, acoustic and electric guitars with Leah Shapiro holding up the rear on drums.

During heavier tracks like Rival and Weapons of Choice the audience go wild with the hardcore of fans at the front slamming in to each other good style. The plastic glasses of water being thrown around bring a welcome relief on one of the warmest evenings of the year.

B.R.M.C. have a huge back catalogue and they deliver the best of it tonight – it’s not all rock and roll, some of the quieter acoustic numbers have the crowd swaying in appreciation but it’s pretty clear what they are here for and the band know that, quickly raising the tempo. 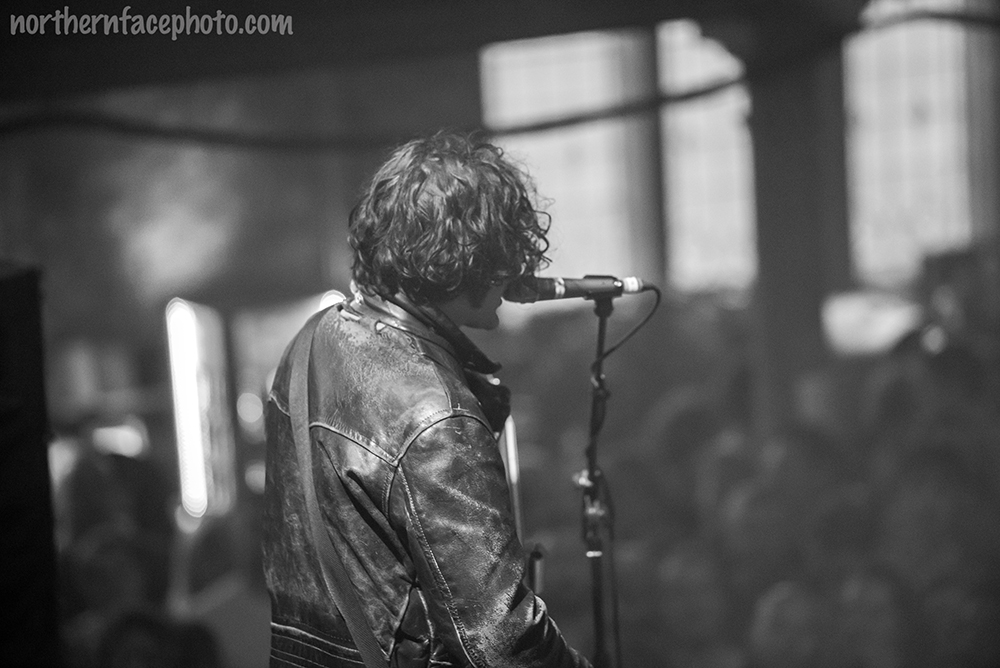 Apart from one or two exchanges the band get on with it to a hugely appreciative crowd and at one point Levon Been leaps off the stage into the pit where one of the fans from the audience holds up his mic. If you’ve seen the height of this stage then you’ll know why it could have ended badly – Dave Grohl style! They end the set with the huge, stomping breakthrough track, Spread Your Love.

During the encore they fly though 666 Conducer from the Baby 81 album before launching in to the close; Whatever Happened to My Rock ‘n’ Roll (Punk song), which topped off a hugely memorable night. It was hot, loud and sticky – proper rock and roll.

B.R.M.C. continue their world tour with dates in The Netherlands finishing up in Toronto on September 20th.

Carl Barât and The Jackals’ website is here: carlbaratandthejackals.com. They are also on Facebook and Carl tweets as @CarlBaratTwitter.