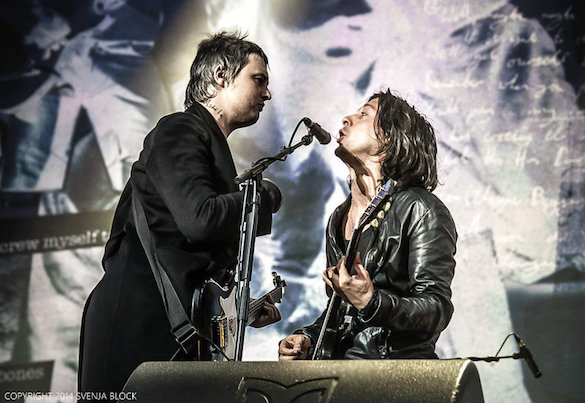 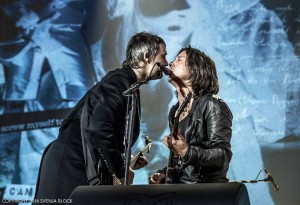 Blinking in the sunshine is an unlikely site.

There is nothing better for a festival than a last minute drama.

Dave Grohl’s shattered bone left a gaping hole not only in his leg but in the Glastonbury schedule and all manner of speculation was rife in the week before with the internet feverishly trying to guess the Friday headliners.

Finally the flame and fame haired Florence and her Machine were simply moved up one notch and the gaping hole, after the magnificent Motorhead beast, was left to speculation and rumour.

Taylor Swift hissed and sighed many as the pop star, with her recent well publicised tussle with Apple and well manicured paw of great pop hits, seemed like a shoe in whilst others wondered about the Libertines – the returning indie heroes who have been sun bathing in Thailand for months working on that comeback album.

The announcement was somehow kept hushed until the indie heroes staggered onto the stage for their first appearance on the Pyramid stage and, like the headliners, owned the place and were a smack in the face for all those nay sayers who claim that there are no new generation headline acts for festivals like these.

God knows where this claim comes from as there seems to be a queue longer than ever of fit and ready big outfits who can easily fill this endless field and the Libertines are just one of them. The band’s brilliantly tinny indie phlegm rattle should not work in a huge open space like this and their sloppy charm and miscued playing should, surely, be perfect for the rancid bars and smoke filled cesspits that spawned them but they come armed with monstrous tunes of heartbreak and lust that connect with both the boisterous indie boys who bounced around with their arms around each other and the welly wearing indie girls who, with the boys, swoon at the song’s dark romance and promises of escape from the mundanity of teflon modern life.

The Libertines rise to the top was paved with lurid tabloid headlines and Glastonbury was perhaps the pace that cemented this myth – the years of the impossibly tall Pete Doherty staggering around with Kate Moss backstage – the rock n roll royalty of the post Britpop decade complete with their bedraggled sartorial junkie chic and cig in gob, death defying, good times swagger.

All this Pete and drugs and supermodels story clouded the vision of the band and as he lived out his careless life in the headlines the band’s poetry and music was somewhat forgotten. They slowly became this last band standing rock n roll myth instead of the heirs to the Smiths lonesome bedsit poetry crown.

Like any rock n roll band before them the myth overtook the reality and the music was relegated to, at the best, the soundtrack to their story.

Their reformation, a couple of years ago, has partly put this right. Doherty has swerved the headlines in the last few years, relocating to France and becoming more private and letting the music stand for itself. They are now partly a heritage act dealing out their death defying, near to collapse brilliant versions of songs that were indie disco classics for a generation that came even after Oasis that needed a band of its own. Not that they are wholly a vintage act, there are three new songs that are displayed which are proof that they have been closing in on that new album that may see the light of day.

They may sound somewhat samey in parts but that is actually one of their strengths, the songs are collections of clasic riffs and collapsing licks and hooks busked with the inefrnal chemistry between the two frontman. The lived in Doherty with his flecks of grey and the surprisingly youthful Carl Barat still do that hog the mic – almost snogging – thing that was so much part of their staple- the terror twins, the tar stained lunatics of the chemical post Britpop era who were so much in love with their ideal and eachother that it was literally and breathlessly poring out of them. They were the ones who escaped from the long lost Camden of pot bellied speed freaks with skin that looked like old handbags- these people who lived the rock n roll dream to the full band the Libertines soundtracked it.

Fortunately for them they have the songs and the addled charisma to make it work and it’s a wondrous thing to see them totally own the huge, aching space of the Pyramid stage like returning horsemen of the apocolypse and, like the Rolling Stones, two years before proving that too much junkie business doesn’t always kill rock n roll stone dead.