Home Music Reviews Live Reviews The Men That Will Not Be Blamed for Nothing : Glastonbury :... 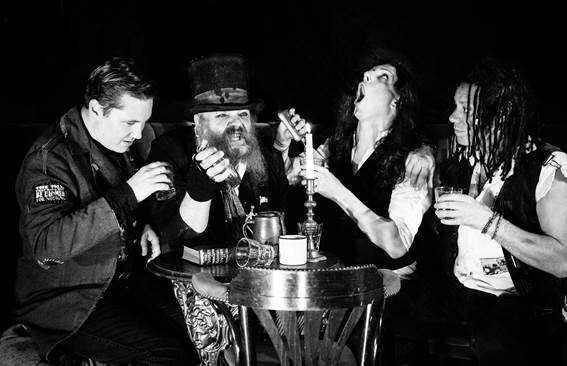 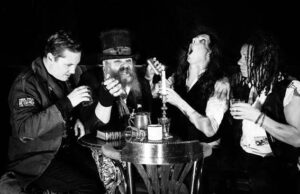 facebook page
The Men That Will Not Be Blamed for Nothing are a fascinating spectacle.

Not only are they ina rush with their killer songs armed with superglue hooks and hilarious twisted lyrics, not only is the packed room dancing deep into the hight and not only do they ooze the feral madness of a loose hinged punk rock band but they are damn great at what they are doing.

Ostensibly dumped into the steampunk genre they are, in reality, a turbocharged punk rock band armed to the teeth with killer choruses and powerful playing who twist their oeuvre with a concept that is darkly funny and acidly biting.

They sing protest songs penned from the perspective of 1832 and rail against the Tories and steam trains and have an anthemic song about Isambard Kingdom Brunel- on one level its laugh out loud funny which is hardly surprising as a couple of the band are also stand up comedians but it’s also like the Dead Kennedys Jello Biafra or even the Fall’s Mark Smith without the magic mushroom weirdness- a twisted reality that makes you smirk and think at the same time.

The tragedy of the band is that these songs against the establishment would fit perfectly into most decades of the UK’s history not that they dwell on it too much. The band are in a rush and the songs create a party atmosphere in a packed bar deep into the Glastonbury night where they are cranking the electricity with their brilliant tunes in the middle of the madness of the Shangri La stage.

The Shangri La area of Glastonbury is the most mythical of the all night mythical Glastonbury party zones. Post midnight and the whole the site seems to be pulled in there along the winding mud stained lanes and tree covered rabbit runs muttering ‘Shangri la’ under their breaths as they seek out an all night rave up in the huge sprawling space that is packed full of countless party scenes.

The Men… are playing in a hastily constructed punk club- a cardboard cut tout of a eighties punk squat complete with a DJ spinning those old school tunes which feels faintly and beautifully incongruous in the middle of ‘Glasto!’. Punk rock is one of the musical blind spots of the festival and makes do with these niche bars so it’s little wonder that its packed in here as the band leer their way through their set with a smudged mascara charisma and high octane passion.

Far too over qualified to be playing punk rock they bring a desperate intelligence to the genre and have the tunes to break out of these all nights bars of illicit revelry and would fit at home on the larger stages which would, conversely, be shame as the band also seem at home here in the sweatbox temporary dives.