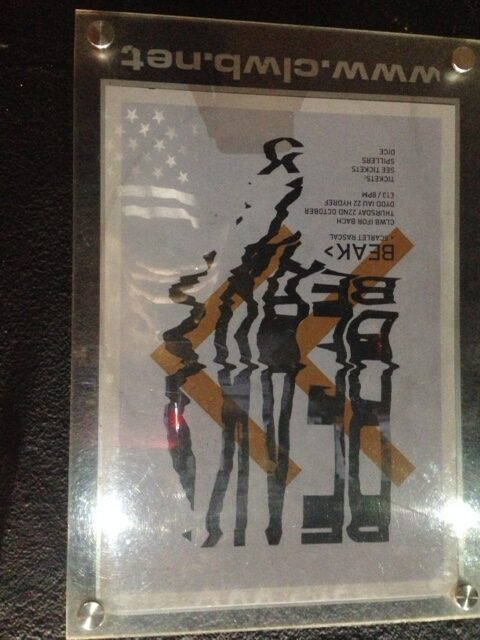 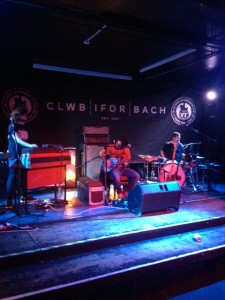 Invada Records took over the esteemed Clwb Ifor Bach for the night last night. Simon Tucker was there and what he witnessed were two bands brimming with justified confidence.

It’s been way to long since Beak> played the capital. A few years ago the trio of Matt Loveridge, Billy Fuller, and Geoff Barrow played the Buffalo Bar and, to be honest, I wouldn’t blame them for not coming here again as they were greeted with an audience that was chatty and non-responsive. But now they’re back and it’s fair to say the wait has been worth it. Before them though, Invada Records-signed Scarlet Rascal took to the stage and delivered a concise, tight, thoroughly enjoyable set that was awash with shoe-gaze feedback and drone, delivered with a post-punk rawness.

Scarlet Rascal didn’t smile – their performance was calculated and effective with Richard Clarke and Maya Indelicato (on guitars and drums respectively) standing out. Lead singer Luke Brooks has a nonchalant on-stage demeanor and his vocals show an obvious love of The Idiot-era Iggy and Mr Mark E Smith. Scarlet Rascal wear their influences on their sleeve but are so self-assured and technically wonderful that they never slip into the mode of pastiche, dodging the copyist trap rather well. Certainly a band worth checking out.

A brief gap as the stage is set and then it is time for Beak>. The crowd draw to the front of the stage in preparation, and with the one-two of The Gaol and Yatton from their second album >> we’re off. These two tracks signpost a different band from the last couple of times this writer has seen them as they are more fleshed out, solid sounding and harder hitting. We then get the first true goosebump inducing moment of the night (many more will follow) as Matt introduces the main guitar motif from The Meader, the opening track from their recent split EP with <Kaeb (our review of which is here). Here is where we truly experience the full power of the band as Fuller’s bass rides the riff with clarity and punch, Barrow’s drumming is on-point, streamlined and propulsive whilst Loveridge’s guitar work is sometimes pretty, often distorted and wild.

The strutting Egg Dog and supersonic I Know follow, with the latter particularly impressive, rushing at bullet-train speed mixed in an Eastern Bloc blender. What followed next was another exciting gear change as we witness a band transform a recorded song that whilst being strong already goes to a different place entirely live. The track is Broken Window (another cut from the recent, The Meader EP) and what is on record a strong Germanic instrumental becomes a different beast live. Slowly lulling the crowd in with a bank of synths and keys, Barrow introduces the four-to-the-floor beat before Fuller introduces the bass riff and off they go. On Broken Window you get a truer understanding of how good a drummer Geoff really is and the pattern he has to play is one that can sound simplistic but when you witness what exactly goes into it you realise that this is a highly skilled musician with an innate sense of rhythm and flourish.

A gloriously woozy Spinning Top and transitive Wulfstan II follow with the hypnotic Battery Point, which the band had to restart after a chatty crowd (seriously what is up with Cardiff crowds and their incessant desire to talk during a gig? Sort it out the lot of you) were told ever so politely to hush. And then…

The moment tonight went from a great gig to one of huge importance was when <Keab appeared to play their proto-psych masterpiece When We Fall – one of the finest songs released this year. Full of beauty and political anger it manages to be soothing and disturbing at the same time and tonight it gets a full injection of endorphins as, halfway through, the song morphs into a jam full of distorted electronics and sensory overload. A true moment of alchemy and one that those in attendance will never forget.

The band then finish with the lullaby Blagdon Lake taken from their self-titled debut and that’s it..over..no more.

Beak> are on fine form. They’re your favorite band even if you don’t know it yet. Fan of Berlin-era Bowie? he’s in there. Lover of Neu!? they’re in there as well. Like Barrett’s Floyd and Sun O)))? yep, there’s flavours of these in the mix as well but the noise that Beak> produce is firmly their own. They tap into a rich vein of alternative music bringing it screaming into the current, morphing and twisting expectations and preconceived ideals.

We hope they don’t leave it so long until they come to Wales again and if you are lucky enough to catch them, enjoy and please shut the fuck up when they’re playing.