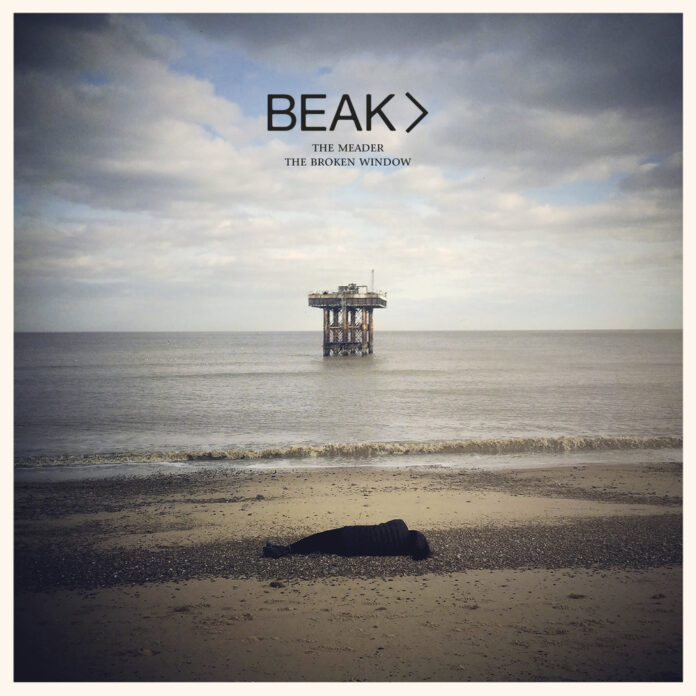 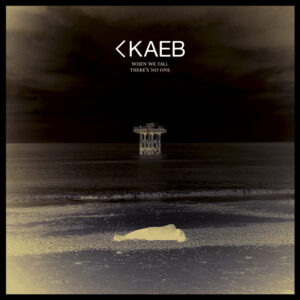 When it comes to the work of Bristol based trio Beak> (Matt Loveridge, Billy Fuller, Geoff Barrow) you can scramble around forever trying to find comparisons on which you can base a review. This would be a futile experience, as they are one of those rare bands that, although there may be slithers of influence that you could dig out, their sound is, and remains, uniquely their own.

The Krautrock reference may have been an easy one to notice at first, but to label them a Krautrock band would be doing them a disservice as they also touch upon art-metal, drone, ambiance and world music. Delving into their output is always a rich and rewarding experience with many an unexpected left turn or about face where you can be smashed by the thump of That Cold, be terrified by the oppressive Dundry Hill, or lose yourself to the infectious groove of Spinning Top. All of which makes each release an exciting prospect and when news broke that the band were going to releasing a new split EP with … themselves, interests were rightly perked.

So who are <Kaeb? Well according to the press release <Kaeb are the band’s alter-ego “who differ in the aspect that <KAEB can have an ever expanding and floating membership.” and with this EP that “floating membership” includes Californian rapper / producer Jonwayne. So let’s start with the <Kaeb side of things.

The first thing we hear from <Kaeb is the autumnal lament When We Fall (above), a devastatingly beautiful song which harks back to a golden age of folk music where the alluring textures lay a bed for some hard-hitting lyrics. Lyrics that sound like the sad last words of a soldier sent to war, or lyrics that give a human personality to a drone sent to destroy people or objects that it has no personal qualms with and is made to do so against its own will. The production of the song adds a warm, rich, timbre, but it allows lyrics like “With the sound of the children left behind makes us choke on the fear even more” and “with our medals still never worn” to shine through adding emotional gravitas. When We Fall is a monumentally gorgeous song that has the power to invoke tears within the listener and scans through decades of protest music to create a work that is current, engaging and powerful. This <Kaeb band may be onto something…

Then, as is their want, <Kaeb (like their alter-egos Beak>) twist us into something new and provocative with There’s No One which is where Jonwayne makes his entrance.

Appearances are not what they seem on There’s No One as we are initially introduced to the song via far-off harmonized vocals which sound like spirits trying to contact, then in comes a heavy-hitting breakbeat that grooves and snakes as Jonwayne embarks on a surrealistic trip through his mind taking us with him every step of the way. Spitting about “puppets in my brain” or how “she looks so innocent but God is a magician” Jonwayne never strays into the cliche, or steps into the familiar, instead utilizing free-form and abstract poetry to paint images that linger. Reminiscent of the JJ Doom album, Key To The Kuffs, There’s No One struts and twirls before something rather extraordinary occurs. You sense the song may be brief as it starts to fade but instead, we are thrown into the void where random bursts of instrumentation swing us from side to side. Keeping us anchored is the spoken word of Jonwayne who regales us a tale of a “flea that he wished death upon last week” and how he “feels lonely or at least jealous” of the dead flea as “he knew he didn’t have time” before we are brought back to the first section of the song swaying out the finale.

There’s No One is a rather thrilling five and a half minutes and reinforces the belief that with <Kaeb this band are set for even more exciting aural journeys in the future.

So what about Beak>? Well, on the two songs presented here, you can be safely assured that they are as contrary, progressive, and funky as they have always been but now they seem to have added bags of confidence that shines through on the music within.

Opener, The Meader (see video below) is a perfect example of this as it stutters into life, stop / start stop / start before a colossal bass riff and drum patter emerge kicking open the door and marching out into the world with head held high, shoulders pushed back and chest puffed out. Quite simply, this is one of the best things the band have released and it manages to encapsulate what Loveridge, Fuller, and Barrow have been doing for a while now, all condensed to three+ minutes. Bursts of aggressive / slashed guitar appear, vocals go from measured and soulful to hard and shouted, the bass locks everything in and gives it a swinging hypnosis refusing to let you turn and look away.

For Broken Window, the second Beak> track on the EP, we are taken into the more familiar sound of previous releases but with added wallop. Everything about this song is BIG, from the kick-drum which sounds like it was recorded live on a big venue’s stage, to the swathes of synth that wash around you, to the lead bass, Broken Window is a dystopian travelogue where we hold on and gaze out of the window, tearing through the artificial and synthetic future. A sonic documentary of a world that is to come…

Over its four tracks, Beak> and <Kaeb have not only managed to create one of the releases of the year, but they have also managed to pull off that difficult task of keeping long-term listeners on their toes. The unexpected is to be expected now more so than ever before. A unique release from a unique band(s), this EP will, to paraphrase Jonwayne, “get your noggin in a tailspin”

~
Beak> are heading out on tour in a couple of days for the following dates:

You can pre-order the EP here.