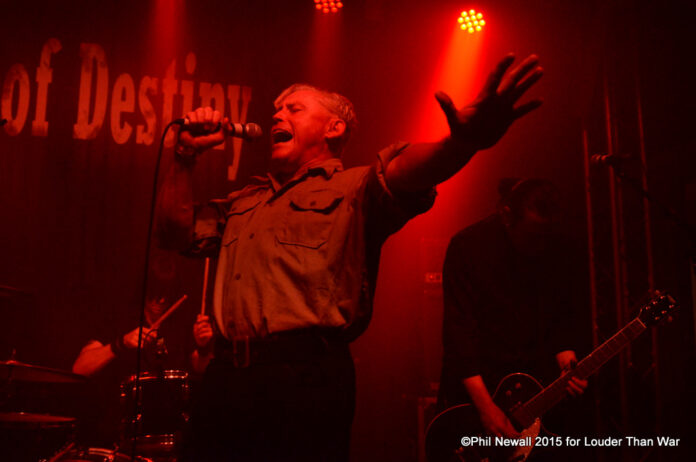 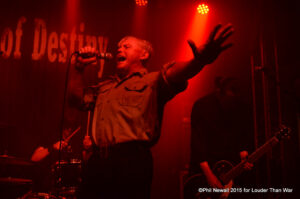 Spear of Destiny took to the Liverpool stage as Samuel Barber’ ‘Adagio for Strings’ filled the loft venue – Barber finished the arrangement in 1936, and it was performed for the first time in 1938; a review the following day in the New York press described the piece as “full of pathos and cathartic passion” – whilst this might seem a grandiose description I believe it is equally apt for tonight’s performance.

After an extended delay as guitarist Adrian Portas struggled to wrestle some life out the array of effects peddles splayed in front of him, Kirk Brandon led Spear out onto the compact stage, to his right bassist Craig Adams – it’s worth mentioning that in their earliest incarnation tonight’s support band The Expelaires featured Craig, the band supported both Echo & The Bunnymen and The Teardrop Explodes (I think I was actually at one of those gigs way way back in 1979), these supports brought them to the attention of Bill Drummond who at that point was running Liverpool label Zoo Records who issued their debut 7” ‘To See You’ b/w ‘Frequency’ – so the evening had an element of synchronicity to it…anyway I’m waffling!!

Opening with ‘World Service’, the title track of the bands third album, the almost melancholic keyboard refrain, the nagging strings and then the voice…”I hear music, I hear music” – despite his 57yrs of age with 35 of them spent touring and recording, Brandon’ voice has lost none of its impact, further evidenced by the opening shriek of ‘Rainmaker’…Adams 5-string bass underpinning proceedings as Brandon and Portas combine their guitars to devastating effect. ‘Never Take Me Alive’ from the 1987 ‘Outland’ album demonstrates that Spear Of Destiny not only have a vast back catalogue, but are not afraid to plunder particular treasures – there is something special about what is initially a sparse track that then effortlessly morphs into such a vast sprawling soundscape, the keyboards evoke visions of vast open plains, wind lashed tundra… 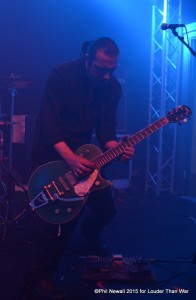 Brandon seems more reserved than when I saw him front Theatre of Hate earlier in the year, less interaction with the audience, though this certainly doesn’t diminish the performance; the subtle interaction between Brandon and the band are enough to recognise that they are enjoying themselves. For those of you who have been unaware of Brandon’s activities in recent years – he has not rested on his laurels, he certainly hasn’t joined the Rewind circuit, and ‘Sputnik’ from the 2014 album ‘31’ evidences this; the track is distinctly different, certainly in the live arena to much of Spears earlier material, its darker, a cavernous rumbling bass, whilst Portas guitar adds shards of colour, a deeply atmospheric piece that I suggest is quite brave to perform live; at this point Brandon tells us that he is taking us on the “Spear Of Destiny magical mystery tour” – not a problem when your tour includes tracks like ‘Land Of Shame’, and ‘The Price You Pay’ the title of an oft overlooked album from the tail end of the 80’s, ‘Fascinations’ again from ‘31’ has an almost off-kilter post punk vibe to it, angular yet accessible that clearly harks back to Brandon’s days in The Pack and his well-known fondness for early Joy Division, sticking with ‘31’ as Brandon keeps his guitar tech busy switching guitars for almost every track, next up its ‘The Failure’ – the Brandon’s Gretsch bringing a huge road warrior vibe only matched by the full throttle vocal delivery, the power washing over from the blue colour washed stage is frankly enough to make the hairs on the back of your neck leap to attention; until the chorus I barely recognised ‘Soldier Soldier’, yes the Spizz Energi track, despite the dramatic reworking the track retains its original jarring urgency, but becomes Spear material, equally at home with the bands recent work as with their classic material, neatly pointed out when they launch into ‘I Can See’ again from the ‘World Service’ album. 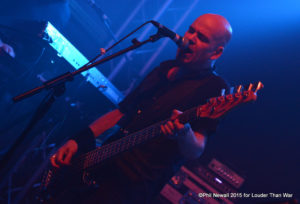 Closing with the anthemic ‘Liberator’, taken from perhaps the defining ‘One Eyed Jacks’ album, I recall myself and others in the audience hurling ourselves around Liverpool Mountford Hall in 1984 when first released; 31yrs later I am sorely tempted to repeat that moment – Brandon bids us goodnight and leaves the stage, there is no feigned encore – the roar from the audience is heartfelt and genuine; the reward is equally genuine; Brandon has an air of humility as he allows himself to take on the applause before finishing with ‘Walk In My Shadow’ and the magnificent ‘Mickey’, the repeated cry of “I wanna go home, I wanna go home…to you my mother” the lyric as relevant today as when it was first written.

Yes, I’m gushing a bit, but Spear Of Destiny were quite simply – stunning, Brandon put everything into the performance, he is contrite, he is theatrical; above he is genuine, and certainly “full of pathos and cathartic passion”.