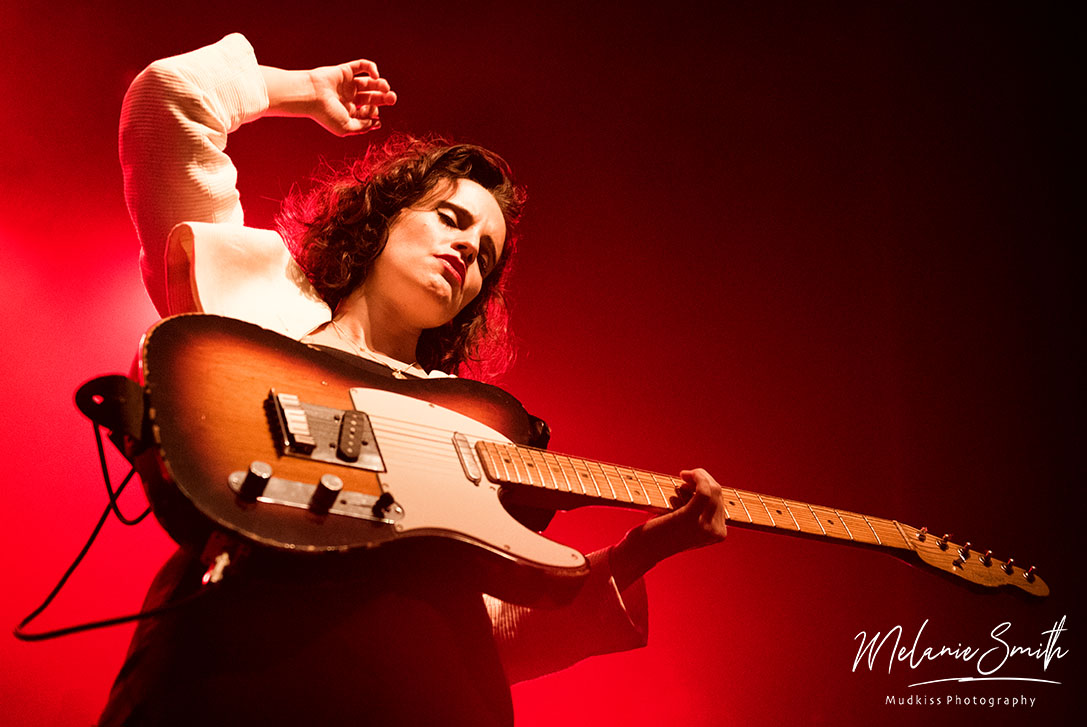 The prospect of seeing Anna Calvi live in the dark, hot depths of Manchester’s O2 Ritz had me excited. After all, this arresting musician – with her third album ‘Hunter’ released earlier this year and reviewed here – strokes and stokes transgressive, turbulent themes; her latest work lashing against gender confines and portraying a bold ‘hunter’ rather than the ‘hunted’. Desire, seduction, want, power and passion all seep through in shades of red and black.

As well as the exploratory quality of her music, the prospect of Anna Calvi live also offers opportunity to see her deft instrumental talent – with Calvi not only an expressive guitarist capable of pushing the strings to peals of emotion, but crafting her voice to a soaring, spiralling instrument in its own right.

And considering that the Hunter album – her first in five years – encounters the prospect of pushing back gender roles, jumping into different identities and encouraging self-expression rather than condemnation, I was interested to see how this would be articulated in a live set.

The sense of intrigue was kept on high, as rather than opening with a bustle of guest bands, instead there was a DJ set from the local Thirsty Girls Collective. Serving up a series of shimmering tunes, many with a mysterious edge, this was an arrangement which worked well, the mood in the room stoked and hungry. 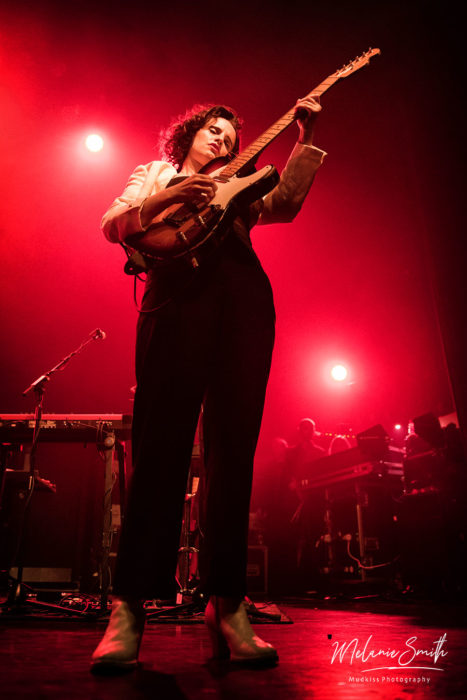 Then Anna entered – guitar firmly in hand. With deft, deliberately paced strokes she sent bolts of sound smack into the audience… opening with a solo in a rather unexpected format. There was already something bristling in her delivery, as if telling of pent-up passions which for this evening, we were going to be privy to. Goodbye radio-ready format and welcome… a streak of wildness.

The solo ebbed and flowed for minutes, before then surging into the track ‘Rider’ – a piece of billowing bitter sweetness underlining the themes of much of Calvi’s new album; realisation and recognition of the potential fluidity of identity. Sacrifice and simultaneous change. What was particularly underlined in this opening track was the amplified articulacy of her voice, her range tremendous yet always resonant, allowing every word to work with the music and into the ear. Operatic, even.

The ability to reflect on this was enabled by the carefully-synchronised instrumentation otherwise – and looking around the stage, I was struck that there were only three planned spaces: one for Anna, a loaded series of drums and a large percussion area. Forget multiple guitarists adding weight, Anna Calvi’s gigs give force from just three live musicians.

Indeed, the only other musicians who accompanied Anna during her set was a drummer (the powerful Alex Thomas) and multi-instrumentalist (the utterly impressive Mally Harpaz) – but this arrangement seemed to add to the sensuous, striking force of the music. Both musicians bent and swayed, following Anna’s movements, a prowling kind of chemistry between all three. Their combined craft stalked the stage, with the breadth of drums and percussion in use underlining the tactile, raw-powered nature of Calvi’s latest material.

Testament to this force was another track early in the set, ‘Indies or Paradise’ – the drumbeat utterly pounding, yet Calvi’s sashaying vocals always so well synchronised, still managing to strike above. It seemed to underline the power of hot human expression, something which very much stands out on the ‘Hunter’ album and emphasizes it as a kind of departure from Calvi’s earlier, perhaps more cautiously polished work.

Instead, ‘Hunter’ hangs up caution and cuts it open to bleed – and the live version of the album’s title track seemed to do just that, dripping with internal desire as Calvi’s voice commanded the room over a haunting beat provided by recorded breaths. And it was from visceral to voluminous, as the key single ‘Don’t Beat The Girl Out Of My Boy’ followed. 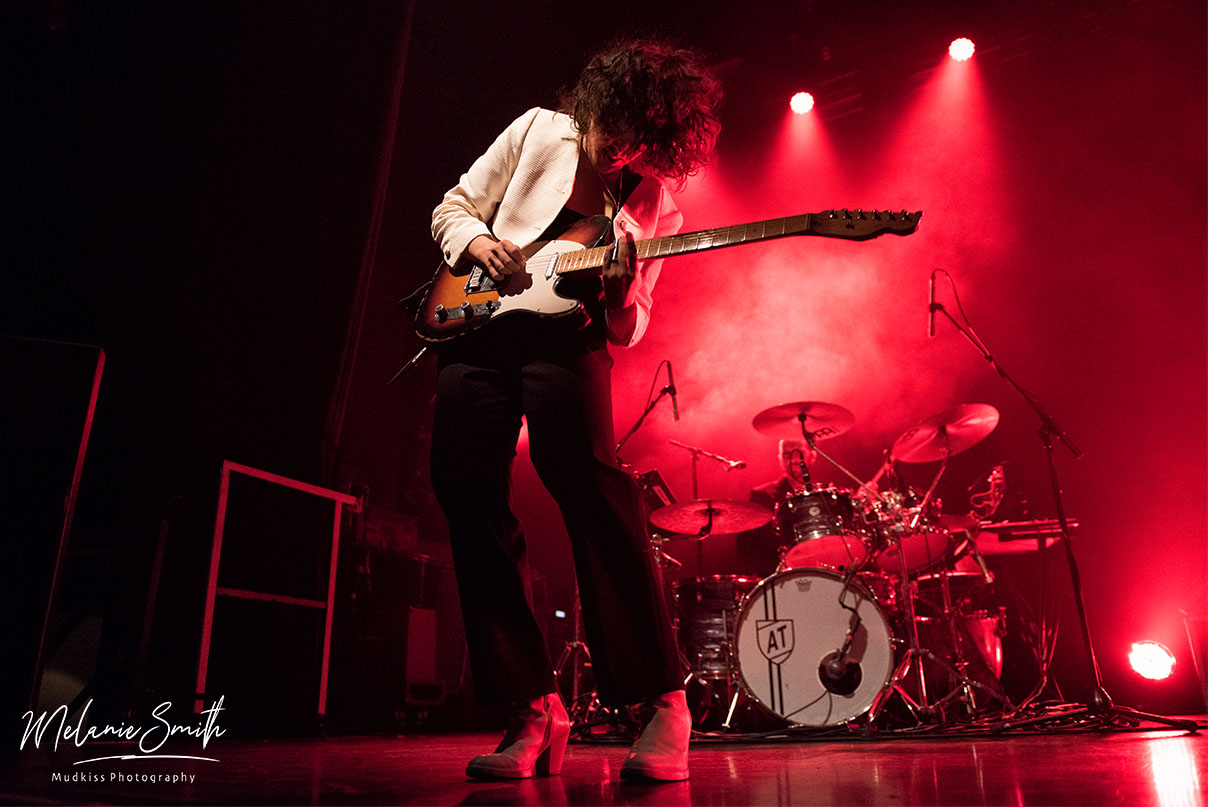 ‘Don’t Beat The Girl out Of My Boy’ is an intriguing piece in itself, underlining Calvi’s use of sound to strip back social convention and celebrate self-expression. Expressive Calvi certainly is – by this point in the set, her body and guitar were in apparent possession of each other, her frame rising and falling as if to meet every wrench on the strings. During the track’s enormous vocal outcry, she cast out the sound on her knees like a revelation, resonant in a series of seething yet powerfully executed screams… to enormous applause.

‘Possession’ and ‘resonant’ are two words which certainly could be applied to this live set – and possession in terms of: possessed. That seemed to be the effect, as if the music had inflamed something within Calvi’s desire to communicate, a kind of urgency, and she regularly leaned into the audience, locked eyes with them. Locked eyes with me.

This was the type of gig where those at the front don’t just feel entertained, they feel affected. The track ‘Alpha’ emphasized this, the gasping, goading breathiness of Calvi’s ‘a-a-a-alpha’ oozing a sexual charge into the tune, which fizzed and popped in all the right places. The line ‘I divide and conquer’ was delivered like a rallying call, this track well-placed at just at over halfway through a set building up its encouragement of self-assertiveness and self-love. 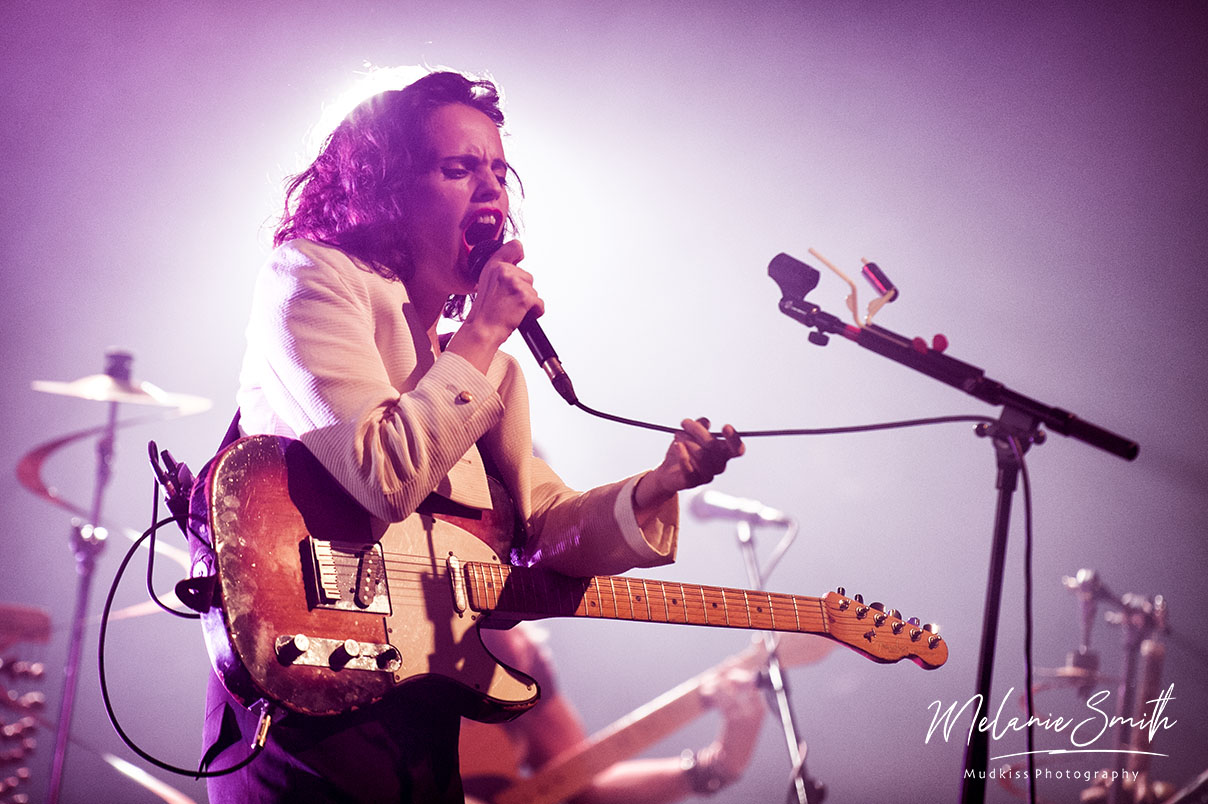 Assertiveness is an interesting theme to explore after all, considering that Calvi herself has spoken before about her naturally introverted nature – and that self-expression should be an area for the individual, for trying new things. I certainly experienced something new in the form of the track ‘Swimming Pool’ during its live performance, as this is a track I found perhaps a little more abstract and alienating on the album, yet really felt its force live. Here Calvi proved not just vocal power but vocal craft, pushing peals of beautiful celebratory song into the audience. I wanted to slip into the image she so strongly evoked, as the lyrics indeed invite us to ‘come down to the swimming pool’.

Throughout the set, Calvi captivated the room both with voice and guitar – neither compromised by the other, instead coming together in a kind of unity, each seeing to urge increased experimentation with the other. This was a show in which we saw Calvi scream, shout, crawl, drag her guitar round stage and rub her hands raw on its strings as she straddled the instrument on the floor. Finishing with ‘Wish’ and ‘Desire’, these were cleverly co-ordinated choices telling of the potential power of touch, lust and longing. 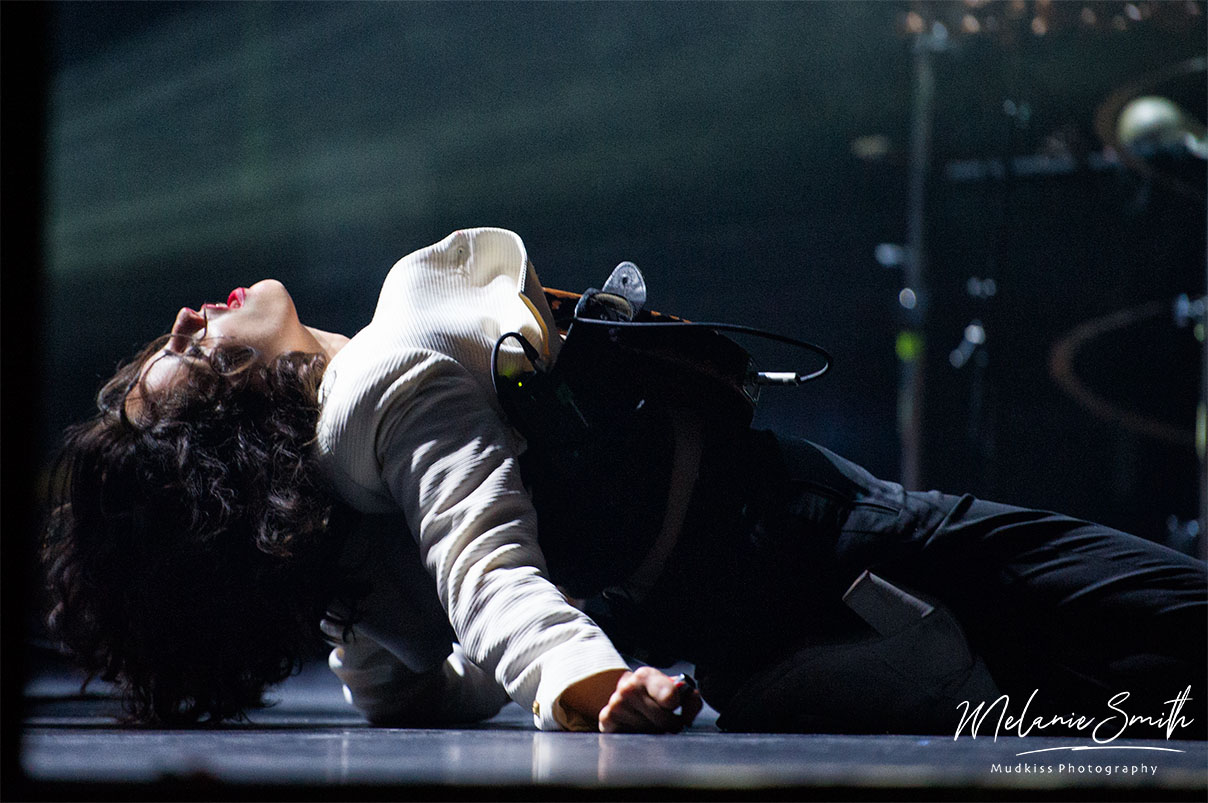 After the ‘finish’ however, came a final two tracks – and the kind of encore no one could have expected. Both tracks come from Calvi’s older material, the first being the sweeping ‘Susanna and I’, a stunning ballad bringing themes of female connection and recognition to the fore. But the highlight for me had to be a literally haunting rendition of ‘Ghost Rider’ – her cover of the famous song by Suicide.

Throwing her body into gutsy plunges of guitar, Calvi seemed to circulate, spit and seethe the words like a warning – the lines ‘America, America’s killin’ its youth’ stinging. There seemed something especially revelatory here, as she struck and simmered over the guitar, her tousled hair and smeared face a searing expression of handing everything over. Swallow that, said the music. It was a final whack in the guts of a wonderful, wild set cementing Calvi as one of the most talented artists in her field and working against the moulds society likes us to shape to. This was a set of stunning instrumentation and a shape not owned by anyone… that of free expression. Utterly affecting.

For news on Anna Calvi, check out her website.

Words by Emily Oldfield. More of Emilys work can be found here at her Author’s profile..