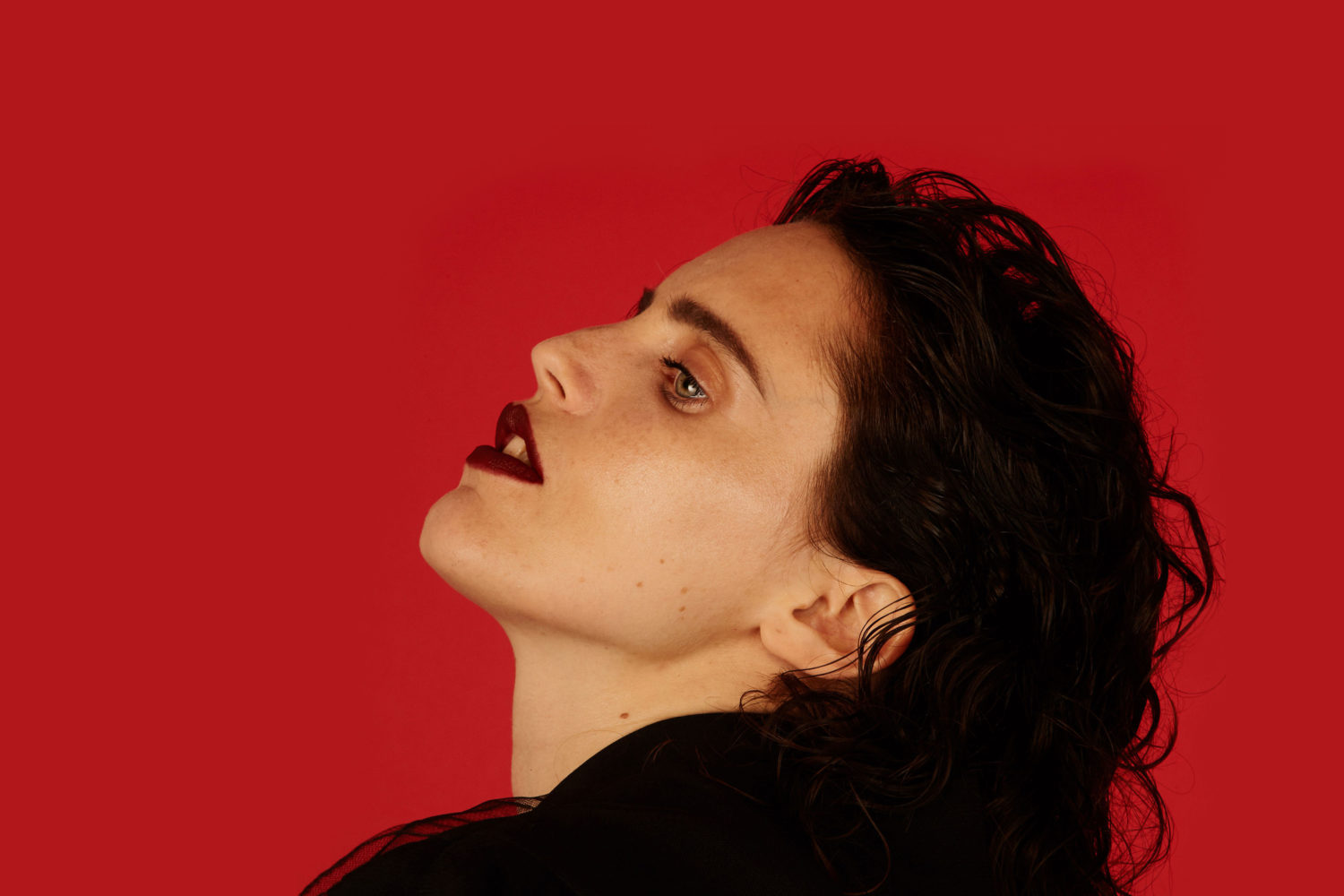 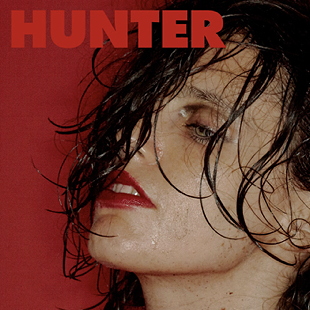 Anna Calvi’s new album ‘Hunter’ – released 31 August – seems to channel sounds from all sides of the hunting process itself and how these are projected onto human relationships – the hunger of desire, thrill of the chase. These also include the sensations of anger, indignation and objectification; experiences the sound seems to overcome by throwing off the shackles with celebratory, surging, guitar-gripping force. That is indeed a word which could be applied to this album – force – with the musician making a statement as the ‘hunter’ rather than the ‘hunted’. Louder Than War’s Emily Oldfield takes a listen…

A force exploring interpersonal tensions through powerful, deeply distinct sound is certainly welcome in a month which typically sees the return of Freshers’ Week orientated anthems and back to work easy listening. Calvi provides no such thing with her third album – this is innovative music, with each track unique and rich, throwing weight into warping gender convention, allowing for experimentation and resisting definition. This album is not a complaint against any particular gender expression though, it embraces fluidity and encourages self-exploration; something significantly uplifting despite the dark depths it plumbs.

Textures vary from simmering sensuality to arching anger and even a touch of the choral; significantly possible thanks to a stand-out, stunning vocal which sets Calvi’s work apart. With production from Nick Launay (Nick Cave, Grinderman) and instrumentation added thanks to a band including multi-instrumentalist Mally Harpaz, Portishead’s Adrian Utley on keys, The Bad Seeds’ Martyn Casey on bass and Alex Thomas on drums – it is no wonder that this album was hotly anticipated.
Calvi accompanies her vocals with expressive electric guitar – and it has to be said that this instrument really is notable across this album, wielded almost with a voice of its own, from brooding and hot to almost hysterical. It adds emotiveness on its own intense terms, providing the progression of tracks with a kind of aural intimacy.

‘As A Man’ opens the album on striking upbeat, shaking percussion and sudden surges of drums seeming to conjure up the imagery of something snaking, seething. In this track, Calvi taps into themes of role reversal: ‘If I was a man and opened my door’. But rather than condemning here, she prises open gender politics and explores; her music emphasizing the human want for intimacy, beyond boundaries. The guitar gives gravitas and the sudden drums and percussion push a sense of daring into the sound, reaching an ear-driven buzz as the lyrics declare ‘Now I feel you completely’. Intimacy, underlined.

And the intimacy continues thanks to experimentation with tactile textures and vocal flourishes, which result in a series of tracks oozing in interest. ‘Hunter’, the title track of the album is heated with opening breaths, beat-like drums and surging synths, closely fitting as the vocal veers into the sensual ‘I dressed myself in leather’. A soundtrack of a hunt for the human, digital age of chain dating, fetish fancies and fast hook-ups. This track reaches telling heights, with a dark electronic element underlying the music making it instinctively enchanting. ‘One more taste/one more time’ puts that human craving into words, worked with power thanks to the imploring wail of a guitar.

Another track where the guitar gives a mood-developing definitive surge is the following ‘Don’t Beat The Girl Out Of My Boy’, again a kind of articulate role reversal, which has already attracted much radio play. The plunge of guitar gives force to a mix with a steady beat, making it melodic and moving, the power of her voice pushing to a crescendo, gripping the goosebumps on my arm. Emotive and utterly memorable, this is a track emphasizing how we can embrace gender as whole rather than existing solely within strict definitions.

The album then shifts from the hot, haunting vocal cries of ‘Don’t Beat The Girl Out of My Boy’ to the almost generic birdsong built into the beginning of ‘Indies or Paradise’. A generic trope or an interesting addition? I believe the latter, as this opening gives way to a menacing, mincing sound with a whispered series of word expressions, like ‘taste the dirt of us’. This is a track which seems borne out of weight, the crush of built experience and bodies, highlighting a series of songs each exploring intimacy in their own way. As again does the guitar, gearing into an almost smashing sensation which sends this piece out on a high.

But just as Calvi is capable of soaring heights, she is also an articulator of simmering succinctness and stalking moods, again melting into the ‘Hunter’ thematic. The track ‘Swimming Pool’ provides a different texture again, rippling with sounds and washes of electric guitar as title seems to suggest. 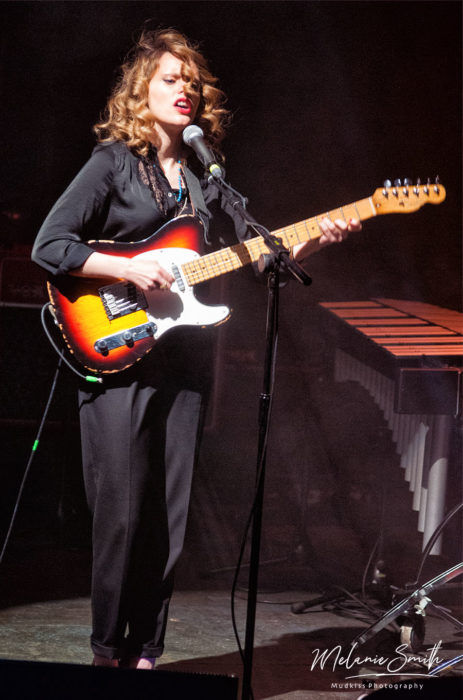 The listener is lapped by the waves of music here, so to speak, with a surge of cymbal sending the experience into a blend of soaring strings and harmonies which highlight the unique nature of this area of the album. Her voice almost has a choral quality, entreating ‘come down to the swimming pool’ and ‘waves of desire’, showing yet another side to human sensuousness; soft, tempting, toying.

In contrast, the following track ‘Alpha’ is much more assertive, almost stingily acidic, opening with a fizz of frustration in the terse, tight lyrics ‘The lights are on/ The TV’s on/ my body is still on’. An expression not just of female desire but the need to be satisfied – and to have this recognised for all. The vocals are raw and resonant, complemented by tactile finger snaps and thundering drums.

What works particularly well here is the craft of chorus, expressed ‘a-a-alpha’, gasp-like, guttural and sexual, topped up with goading guitar. Yes please. The lines ‘I divide and conquer’ however, come as a nod to female empowerment, taking tropes commonly associated with male experience and turning them upside down.

After the turbulence there comes another change, this time in the form of ‘Chain’. The track opens minimally with closely recorded vocals, recalling experience in the back of a car – ‘she told me don’t breathe’. Then the vocal bursts in a sudden surge of power reaching an almost ecstatic cry – this is a stand-out track on the album because of the way in which it celebrates the range and resonance of Calvi’s voice.

And it is a voice that is saying something, sharing something, again elaborating on the running theme of role-switching and sexual freedom. The trill of ‘I’ll be the boy, you’ll be the girl’, is alternating and emphatic, ending in a well-cut fade out which leaves space for reflection.

For what Calvi’s music indeed invites the listener to do, is reflect. It is fully-charged, fascinating sound which expands through a range of moods, the many which we go through in human contact. There’s ‘Wish’ with a sense of sliding unnerve worked into the bassline, along with a driving cymbal rhythm, sighs and gasps which give a feel of longing… slipping over the senses of the listener.

‘Away’ offers alternatively a change in pace, the lines ‘you know I ask/ no more of it all’ expressed simply, with a succinctly powerful cadence over gentle strummed guitar, her voice seeming to ebb and flow like a flute as the vowels in ‘away’ oozes this song into the ears. We sense asking, absence and aloneness here, another aspect of human connection.

The album’s exploration of intimacy and connection means that a lot of pressure could be seen as exercised by the final track ‘Eden’ – does it lend a kind of conclusion? What does it express? Instead, Calvi leaves the listener to enter that exploration themselves, as ‘Eden’ itself is an intriguing, entreating piece of music which opens with a haunting, sheer note before well-worked layers of guitar and rippling percussion enter into the mix.

The lyrics linger over resonant images ‘needle in the heart/ shadow of the dog’, telling of emotions and also childhood: ‘in the garden we hide, with shoes untied’. There is something meaningfully melodic about this track, the pastoral picturesque cut through with lived experience, as if inviting us to look beyond the images in life and unlock our feelings.

Indeed, ‘Hunter’ as an album provides the force to unlock feelings, something which is challenging but also a gift. This is emotive, enduring music. Highly recommended.

You can catch Anna Calvi on tour next month.

For more on Anna Calvi, she has a website.
Feature Image Credit: Maisie Cousins.