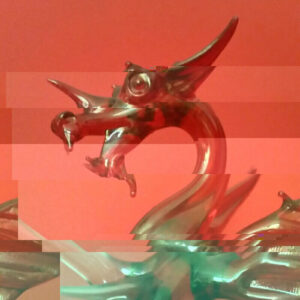 No one knows how to say their name and they make their music by feeding field recordings and found sounds through mobile phone apps. Ioan Humphreys acclaims the new full release from the secretive outfit Xqui.

I’ve had the pleasure of reviewing previous output from Xqui here with the Kindness EP. Yet again, I am none the wiser about who or what Xqui are. All I know about them is from their Twitter feed and their prolific releases. I don’t know where they are from or how many are in the band (if they are a band). All I know is that they make exquisite music from field recordings, found sounds and manipulated media, fed through mobile Apps.

Their first full-length release Dragon was released earlier this month and already they are racking up downloads and CD sales. The opening track I is a playful yet unsettling collection of the sounds of various people trying to pronounce the name Xqui against the backdrop of percussive noise while standout track Bun is an atmospheric piece full of distorted disparate voices repeating phrases which change gradually, producing a hypnotic and minimal effect.

The immersive and engulfing eDial is  ominous, threatening and reeks of desolation and isolation, while Teap is scratchy and glitchy, with menacing sounds of someone desperately scrabbling around on the floor looking for something, and Bead is an experiment with frequency manipulation. It’s twitchy. Loop is the most abrasive track so far, with harsh noise manipulation and the first foray into discordance and dissonance, while AnotheDray has more more sounds of desolation; a second standout is Convicta, another hostile-sounding track which appears to be a field recording of a protest march: very effective and emotive in these current times.

As the album progresses the tracks become more immersive and can actually affect the mood of the listener. Spark is another standout track with a post-apocalyptic feel: the aural equivalent of the aftermath of Threads. Paid has a more upbeat frequency and sound manipulation that brings in gorgeous throbs that come to crescendos and then start again over and over, like a nightmarish rollercoaster that is running backwards. Parts of the track border on having actual tunes and beats: something that excites me for future Xqui releases.

Mehtna appears to be the national anthem God Save The Queen run backwards. It completely reinvents the tune and it becomes a new piece of art with added glitch. Toad sounds like a reprise/continuation of eDial and the essay on sterility and isolation that Xqui does so bloody well. And final track Masse rounds off these pieces. Again, it feels like the sister to Loop with its more abrasive and harsh bleakness.

Even though most of the album deals with soft, atmospheric sounds, I find it has the same unsettling and effect that some harsh noise artists have… albeit without the harsh noise!  Xqui’s cleverness comes from their masterful manipulation of sounds that manage to upset and create disquiet in the most innocuous of ways. As with Chris Carter’s recent output, each track is different and is almost playful and joyous in its experimentation. All the tracks are relatively short, yet they manage to have a breadth and width to them that is quite breathtaking.

As a debut album (and on top of their previously released EPs), Xqui are proving themselves to be a class act and this isn’t just in the way they present themselves on social media. This is also in the way they have a big mature sound that isn’t afraid to push boundaries in what they feel constitutes a ‘song’, ‘music’, ‘found music’, and ‘abstract found sounds’. They are free to experiment and release output in several different ways and this surely must be incredibly empowering. It definitely shows in their impressive releases so far.

If you are a fan of experimentation, Chris Carter, John Murphy, Brian Eno et al then definitely check this album out as well as their other EPs now! Just brilliant stuff.

Xqui can be found via their Bandcamp and they also tweet as @XquiMusic.