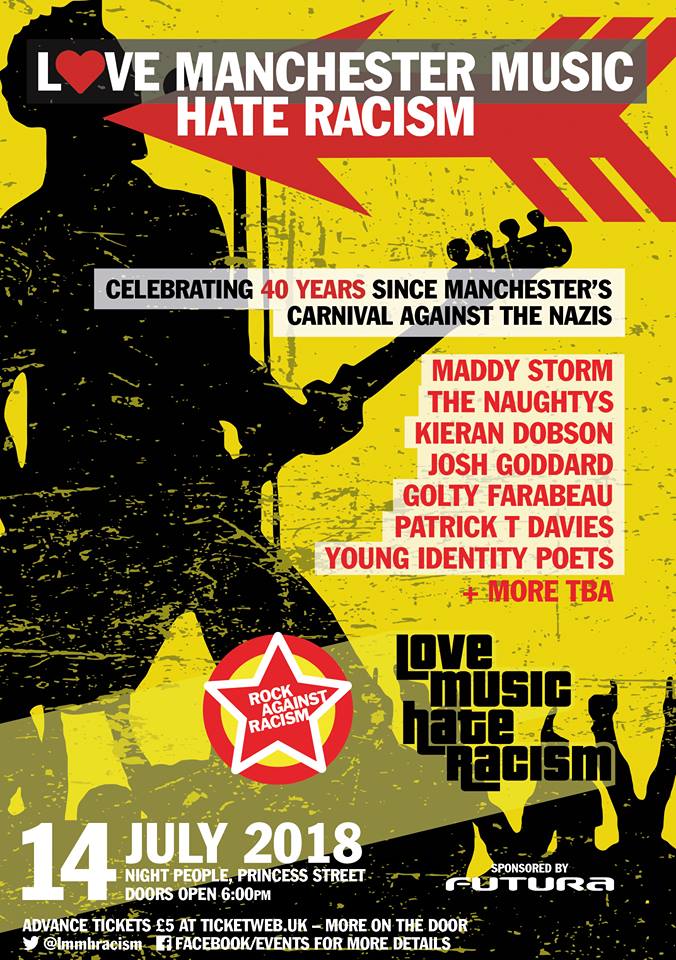 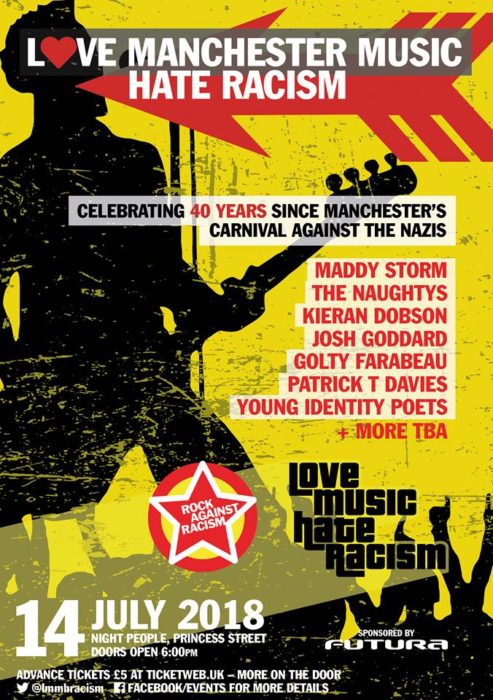 It’s nearly 40 years since the original Rock Against Racism march hit Manchester. Organiser Bernie Wilcox has teamed up with several locals to celebrate and work with Love Music Hate Racism. Friend of Louder Than War and Manchester music supporter John Hall is one of the people involved in the collaboration.

We thought it would be a great opportunity to speak with John as well as a number of young artists making waves on the Manchester scene about racism today and the movement. Nigel Carr from Louder Than War interviews: 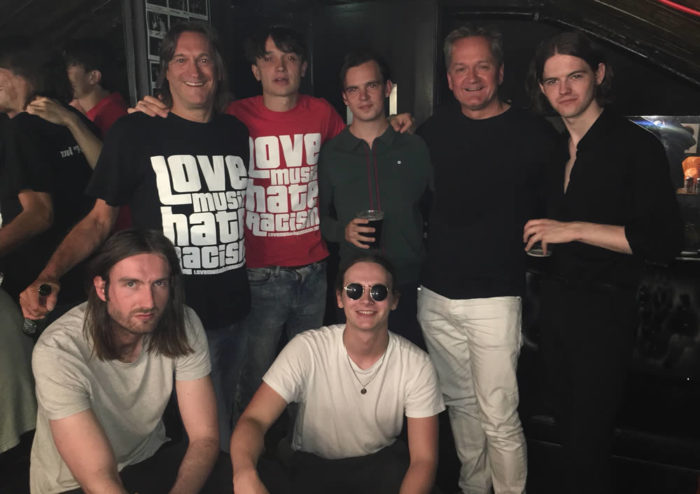 Nigel: I believe there is a gig on the 14 July at Night People under the banner ‘Love Manchester Music Hate Racism’.  As well as Patrick T Davies there are several other acts, Maddy Storm, The Naughtys, Keiran Dobson with Debbie Golt being the DJ who was the original DJ in 1978. Can you tell us a little about all this came about?

John: What happened was it was Bernie Wilcox and Geoff Brown. There was an Eric Clapton gig in ’76 that caused such a furore. It was so racist (Clapton made a comment agreeing with Enoch Powell that there were too many foreigners in the UK), that somebody wrote into The NME and said ‘We’ve got to stop this, it’s rock against racism. People started organisations throughout the country. Geoff started one and it was only really started in the January and by July they had 35,000 people at the carnival.

Nigel: I believe there was a big gig in London in Camden in the April which inspired the movement in Manchester?

John: There was, we had 10,000 people march through town with Gang Of Four and Steel Pulse playing on the trucks as they went down. What it was it just brought racism out into the open. In those days you wouldn’t believe it, everywhere you went, it was racist you know? That’s just what it was, and obviously to be a gay man, just no chance! In ‘78 I was 21 so I was just legal then, but my partner was two years younger, so I could have been put in jail in ’78 if anybody found out.

Nigel: I was a teenager and I had a Rock against Racism badge but it was kind of like a fashion statement as well, because a lot of kids my age, and I was, mid-teens, didn’t really understand what was going on so, we wore the badges, the Anti-Nazi league, the Rock Against Racism badges anyway, because everybody else did.

Thomas: Well isn’t that a nice consequence? having something that’s something to do with hatred, then manifest in to a fashion statement, in to something like that because even though the kids might not get what it’s about at first, they will eventually, because they are wearing it and like you say about, when the bands were in the carnival it’s turning something disgusting in to something quite beautiful. That’s what it’s all about, is it not?

John: I was scared walking down the street wearing the badges because then you’d told people.

Thomas: You were either for or against, that’s wild!

Nigel: It was also because as a young punk you were kind of exposing who you were and of course punk was derided back in the day, you know a lot of punks were like, hidden away, because they were scared!

John: I heard about these guys and thought ‘I’d love to meet them’ so we got chatting this year, and we thought we should celebrate or just bring it a little bit to attention that it was 40 years ago it completely changed Manchester forever, and that there is still racism around.

Eoghan: We’re not quite there yet are we?

Nigel: Do you think racism has got worse, two years post Brexit, that has had an effect on racism?

Patrick: It’s possibly disguised in more subtle ways, more now than it might have been I’ll be honest possibly. I don’t know about the first time.

Nigel: Do you not think that Muslims, in general, are having a hard time, you know that program on the TV about six months ago where a white woman dressed as a Muslim and she felt some of the backlash, that they were feeling just walking down the street, past a school.

Eoghan: That was just after the Manchester bomb wasn’t it?

John: Possibly the only good thing that came out of the Manchester bomb was the way it brought people together?

Eoghan: They were actually filming that when the bomb went off and she obviously felt the backlash of that walking down the street.

Nigel: I watched that programme and obviously there was an aftermath where she would walk past a school and people were just chucking racist comments at here,

Thomas: Going back to Eoghan when he was talking about institutionalised racism, it’s not just a phrase, it’s dressing up other issues, with racism you know, things that are not solved by simply banning the Muslims from the country, for example Donald Trump, or this Brexit thing about ‘all Eastern Europeans must go’, These are problems that have been dressed up to be issues that are solved by eradicating a race, it’s Nazi, it’s wrong and it’s fascist and that what we talk about when we said we’ve still got a long way to go it’s there right now. We’ll look back at ourselves in 20 years, and like, it’s disgusting.

Patrick: Like that stuff in the biggest selling newspapers, every day, every morning, that stuff’s still there. People might think we are more progressive society, but that’s still stocked in every shop in every city, every morning. 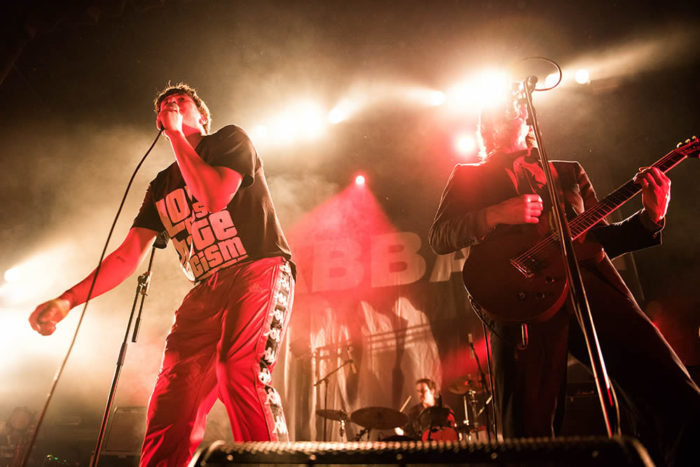 Nigel: Can you please tell me how Cabbage got involved in the movement because there you were two weeks ago at The Ritz with Glamour at Thee Ritz wearing the T-Shirts?

Eoghan: It was all John Hall! Obviously, we are fond believers of the movement ourselves, and big fans of this absolute Manchester Legend (John). So much shit goes on no, it’s bizarre. Things we can be doing about it, I think people need to have more conversations about these kinds of things, and conversations with themselves. We are all guilty, I’m sure of making assumptions, but we don’t actually think about it and then these assumptions need to be challenged by people themselves.

Nigel: Can you John now take us up to what’s going to happen now, at the gig, if there is going to be a march and then what happens afterwards, and then closing with what you need.

John: I’d love to say there was going to be a march, and we are going to levitate the Town Hall, but sadly we’re not doing that. Through the generous auspices of the Lottery Heritage Fund, we have got an exhibition as well that will be at Central Library on St Peter’s Square Manchester looking back at 40 years. (featuring images of the original marches in ’78)

And then with this gig, the marvellous Chris Slater, from the best club in Manchester, Night People, has given it us (his club) for free. The tickets and the T-Shirts that we are going to sell, and the badges, really we want to hopefully put that into a fund where young people can carry this on.

The big thing about it is there aren’t enough black people on this bill. We did it first to get the young people involved like  BIMM, (Britsh & Irish Music Modern Music Institute) so we’ve got this century’s Kate Bush in Maddy Storm and Kieron Dobson, and yeh the next gig needs to be more, multi-racial, so we’ve got blues on we’ve got a poet on, we’ve got a reggae DJ, we’ve got indie, yeh but it’s for the future hopefully.

Nigel: What do you need from the good people that are going to be reading about this?

John: Hopefully, awareness, talking about it, Not standing for racism, you know and sexism and homophobia, in the bars or in the clubs you go to, you know? Just not accepting it. You know that Specials song? Racist Friend, listen to that one for a bit!

Matt: I’ll be there…

John: Come to Night People on the 14th of July!

Love Manchester Music Hate Racism takes place on the 14th of July at Night People in Manchester – Address: 105 Princess St, Manchester M1 6DD Phone: 0161 236 9266. You can buy tickets here £5 each. There will be T-Shirts and badges to buy at the event as well.

This is the official Love Music Hate Racism page.

Bernie and the team would like to thank Futura Recruitment for donating £600 to help the campaign!