Home Music Bands The Courettes – your new favourite band once you’ve heard them! 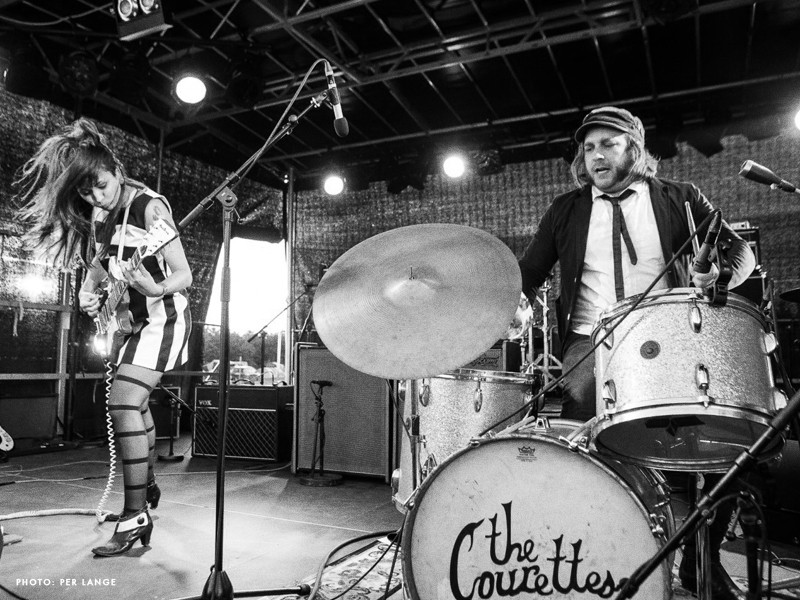 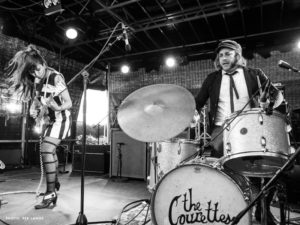 The Courettes – your new favourite band once you’ve heard them!

The Courettes are a blazing hot combination of raw garage punk, 60s girl group melodicism and cool kitsch imagery. A two-piece band – vocalist/guitarist Flavia Couri (from Brazil) and drummer/ backing vocals Martin Couri (from Denmark – where they are based). They’re married – hence the same surname – not a Ramones-alike common identity statement! The lazy comparison is a White Stripes in reverse. Admittedly it’s easy to see why that comparison would be made, but it does a disservice to what it is that makes The Courettes so great. For a start Martin is no Meg White – laying down a much more solid foundation than Ms White could ever deliver. In Flavia, they have a front woman who is clearly, completely at ease in the multi-tasking role of singer and lone guitarist – having to cover all rhythm and lead bases with a minimum of gadgetry. No loop pedals here. For me a more valid comparison would be The Jon Spencer Blues Explosion crossed with the Cramps and Ronnie Spector! Their songs are instantly memorable – ‘The Boy I Love’ is like a lost Ronettes demo if they’d been filtered through a raw garage punk blender and let the Ramones supply the backing.

The band’s singles, and album covers, gig posters, merchandise and website all feature fantastically cool and collectable graphics. The antidote for a band these days to the endless pillaging of back catalogues by internet freeloaders, is the ability to make the physical product such an object of desire, that merely owning a download is no substitute. Think back to the last great era of collectables – the punk era when the urge to collect a band’s entire catalogue was fired up by the brilliance of the covers etc.

The obvious, lazy ‘White Stripes with the roles reversed’ comparison – is that frustrating or irritating?

Flavia: We have heard this here and there, and in the beginning, it irritated us a bit, because the White Stripes are really not one of our main influences – although we like the band. But we realized that people need to make comparisons and connections with what they already know, and for many people, the only male/female duo they know is the White Stripes! So we don’t get irritated anymore, we just wish people start digging more bands to make their references broader.

To compound that last point – recording at Toe Rag might be seen as following in the Stripes’ path – how did that come about? 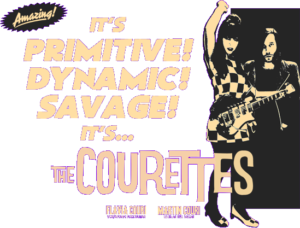 Martin: We were touring the UK and as we were there, we wanted to record two songs for a 7″. Liam Watson was a producer I wanted to work with for quite some time. Not because of The White Stripes, but because of the sound of The Kaisers, Billy Childish etc. He’s a really nice guy and we would love to record there again one day.
F: It was an old dream of Martin’s to record at Toe Rag, that he didn’t get to realise with his old band so we realised it together with The Courettes.

Reeling back a bit – what is your history – bands you were in before this? Did you record?

M: I played indie in my naive and young days! One New Year’s Eve I was in the basement of my good friend’s where I heard The Sonics and I was blown away.

F – I played in a 60s psych band in my teenage years. Then I formed the female garage punk/psychobilly trio Doidivinas, with whom I recorded one album. In 2008 I joined the garage/surf/new wave band Autoramas, and I recorded two albums with them and toured a lot in Brazil, Europe and South America. I met Martin in one of these tours, in Brazil.

F: It was kind of at the same time. When we met in Brazil in 2013, when Martin’s former band was the support act for my former band, we got to know each other more and more in the van or backstage. We were pretty amazed how our musical taste was similar. We fell in love and got together on the last day of the tour. After two years in a long-distance relationship, many hours on planes Rio-Copenhagen, we got married and quit our bands. I moved to Denmark in 2015, we formed The Courettes and had a child, our beautiful baby boy Lennon. In one of these long plane trips, I wrote our first song, ‘I’ve Been Walking’, talking about crossing oceans, travelling through space and time to find love.

What made you decide to work as a duo?

M: We went to the studio and cut two songs very fast. We were both amazed of how well it sounded with only the two of us.
F: Yes, the duo format wasn’t planned, it happened naturally that day – it just sounded awesome with only guitar and drums. The duo format fits our story, makes touring much easier and enables us to plan our tours considering our family life.

I like the way that the recorded stuff doesn’t alter sonically very much from the live experience – minimal extra tracks, percussion etc – have you been tempted to add other members – a bass player?

F: My main instrument is the bass – I’m tempted all the time to record some bass! But we don’t want the songs to become impossible to perform as a duo, so ‘Here Are The Courettes’ was recorded live and raw at the studio, with minimum overdubs, trying to get our live energy on it. Our new album ‘We Are The Courettes’, although also recorded live, has more backing vocal harmonies and I played some organ parts, but the songs work live just fine without them. There’s many ‘duos’ around that when you come to see them live there’s 3-5 people on stage!

Given how hard it is to make money these days in the music business, are you able to sustain a career financially or do you have to work at other jobs at times?

M: I do some graphic design also. I love playing, but I also love designing. Especially 60s stuff!

F: I’ve been living of playing music for the last 10 years of my life. We never know if we gonna make it each month – but all is going well so far. I’d rather have the uncertainty than having a side job!

How does the song writing process work?

F: I write most of the songs, but Martin has an important role in saying which ideas should be worked further on and which ones should be thrown in the trash! The next album brings Martin as co-writer on a couple of songs. 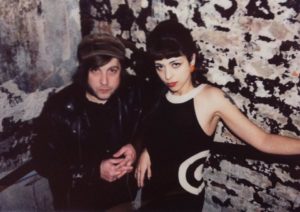 What are your separate musical influences?

M: When we met we freaked out, because our record collections were absolutely the same! I fell even more in love with Flavinha when I saw she had the same Phil Spector vinyl box as me.
F: Being born and raised so far apart, it was such a marvellous surprise to realize that we had such similar music tastes. We love bands like The Kinks, The Sonics, Beatles, Stones, MC5, Motown soul and 60s girl groups. We are both 60s freaks, and we dig not only 60s music, but also fashion, literature and space age design.

Band image/graphics – one of the strongest things is the fantastic covers/gig posters etc that you have – are you designing them yourselves or are you using one/various designers?

M: Yes, I do all the artwork myself. Except the recently released 10” live album. The front cover was designed by Chris Sick. A really good illustrator from UK. Check out his work!
F: Because Martin does all our artwork, that’s why we have very coherent aesthetics. Besides a great drummer, he’s a fabulous designer, I love his stuff!

M: The vinyl experience is way more interesting than this Spotify hell that’s going on. I don’t like that. Music should not be ‘super market muzak’!
F: We are vinyl lovers! Vinyl records sound better, look better, even smell better than CD or digital media! And you get much more info on the sleeve than just downloading the songs. We also love the ritual of listening to a record. The downloading/Spotify culture gives a very superficial approach to listening to music. You don’t know who wrote the song, who played which instrument… you get the songs so easily that you don’t appreciate them enough. Not to mention that the money that goes to the artists is ridiculous. We are maybe the last generation to remember how exciting it was to buy a record and then spin it a thousand times at home. We hope that the cool artwork also encourages people to buy our albums on the physical format than just downloading them.

What have been the high points so far?

F: That’s right! We found the love of our lives and made a cool rock’ n’ roll band at the same time – that’s luck! We’re proud of all the recordings we have made, and happy that shortly after the band was created we are able to play around Europe, perform in some cool festivals and got praised by some great music critics.

What are the short-term plans?

F: Record more and more inspired albums and go around the world playing our music to more and more people. And enjoying our lovely little family.

Anything you’d like to set the record straight on?!

M: Yes, fuck negativity and bitter assholes.
F: It was said before, but all you need is love, indeed! – And maybe also a fuzz pedal. 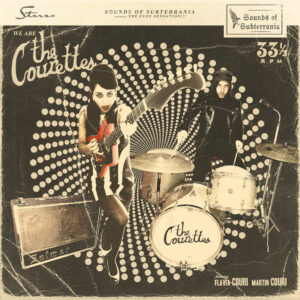 The Courettes’ new album sees a smooth sideways shift from the garage rock n roll of their previous releases into an area that they’d hinted at in the past. They’re channelling the essence of some of the great classic Spector girl groups – The Ronettes and The Crystals – but with the avalanche guitar sound of Link Wray. This is one of the ‘livest’ studio albums I’ve ever heard. The subtle augmentation of their basic guitar and drums approach broadens the sound without making it impossible to reproduce in their two- piece line-up. None of their particular brand of raw ‘needle in the red’ overload has been lost though. Given the right exposure – Tarantino would love them – and with their usual eye-catching graphics – they could easily tap into that vacuum left by The Detroit Cobras and The White Stripes. Early contender for album of the year for me!