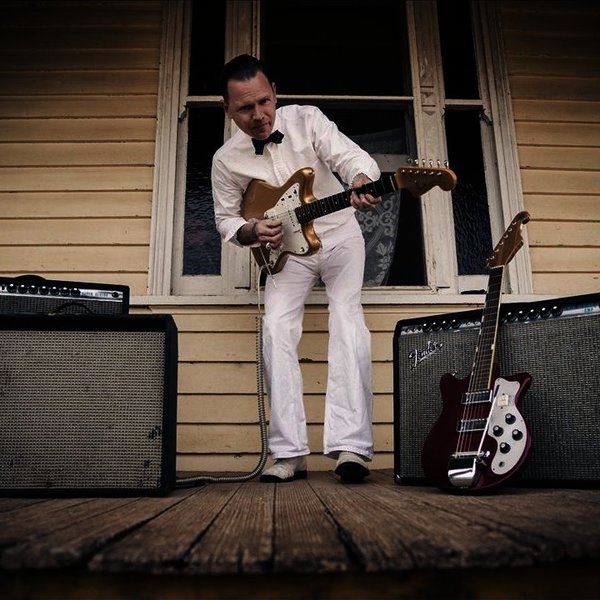 Introducing,  the King of the New Stone Age – CW Stoneking.

Henry Baroche gives us a personal appreciation of the man and his music as he starts a UK tour.

Who is CW Stoneking? What business does he have entering your earholes? And is he genuinely a 21st century recording artist, looking and sounding as he does?

To the as-yet-uninformed of this genre-spanning ringmaster of his bizarre own entertaining, theatrical and emotion and fancy-fuelled musical circus, I would state that he is a perfectly unique case. When he sings, he sounds like a younger, more fortunate descendant of the North American and Caribbean enslaved generations, with the soft breeze of the ocean mixing easily with the wide-eyed mystery of the voodoo forest further inland; when he plays his guitar, he jumps about and croons upon the instrument with all the professional dexterity of a man who knows exactly what he’s doing, and all the feel of a man who barely knows what he does; when he writes, he mixes the inks of Joseph Conrad and Spike Milligan to tell the longest of short tales, with no less emotion or ingenuity. He is Australian by birth, and of 20th and 21st centuries, but could readily belong to any of the North American, African or East Asian heartlands, and have sprung from any time beyond 17th century.

Right here in the still young but heavy swing of 21st century, he is embarking upon a fresh solo tour of the UK, which begins today at the Norwich Arts Centre, in support of his most recent record, Gon’ Boogaloo, released on his own label venture King Hokum records in 2014. Previous releases have seen his musical career span a full decade or more, with debut King Hokum appearing in 2005 and sophomore release Jungle Blues following in 2008.

Each record comes with a unique blend of Stoneking’s virtuoso skill, emotive and fanciful quill and his thrill in the more antiquated elements of musical popular culture. King Hokum was a more solo-driven affair, largely reserved to guitar and vocals, and featured standout tunes such as ‘Way Out In The World’, an aching holler right from the very soul of this highly adept, mysterious man, and ‘Dodo Blues’, a song in which Stoneking voices all three central characters: a disbelieving, slow bartender, his opportunistic boss, and the rare bird he’d purchased that sings sweet melodies

Jungle Blues gave rise to the more prominent involvement of horns and percussion, with lushly orchestrated numbers such as the eponymous title track’s short-story-esque ominous romp and ‘I Heard The Marching Of The Drum’ featuring heavily Stoneking’s humorously named ‘Primitive Horn Orchestra’.

Coming to his third and latest record, Gon’ Boogaloo, Stoneking excels himself in terms of ingenuity, musical mastery and ironic artistry by making both his most modern and primitive record to-date. It is modern in the sense that it features electrified guitar, which he plays beautifully and madly, electric bass, female backing singers and the modern, conventionalised drum-kit. It is primitive because of the fact that it was recorded using only 2 microphones, placed strategically to pick up Stoneking’s vocals and guitar and the rest of his ensemble respectively. Whether this fact is in sharp relief or not, the record is excellent, and iterates plainly his expert ability to effortlessly inhabit a wide range of different genres, from Blues to Jazz to Rock ‘n’ Roll to Reggae to Calypso to Doo-Wop, and likewise his ease at shaping and then unravelling an interesting yarn.

In this era of pluralistic culture, where genres are readily and wonderfully mixed-and-matched and given new life by new bands like The Urban Voodoo Machine and Tankus the Henge, and equally genres that had their heyday in the ‘20s-‘60s are plumbed to the very bottom of the barrel in an often uninspiring ‘back-to-basics’ approach – a sort of cruise-ship entertainment take on the Stone Age of 20th century popular music – Stoneking manages to preserve his individual approach whilst clearly paying homage to the admired greats of his personal songbook.

Check out his back catalogue on Bandcamp