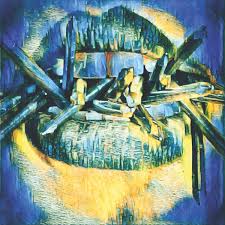 Lee Ashworth ventures out across a musical hinterland to discover Xqui’s Lleisiau emanating from the vanguard of a liberating, new experimentalism.

Where are we?  When are we?  Who are we?  As we scratch and crawl across the seemingly infinite permutations of existence, some textures are amplified through our encounters.  Encounters with ourselves, with others, and always, always an interface, somehow, with the world.  Music is an ear down low to such interface: mediated, accentuated, chopped and clipped but whether it is the most subtle gossamer flutter or the crack and full stop stomp of a loaded weapon, this amplification of interface is the project.  A whole Weltanschauung can be contained and revealed in a single track, from the choice of interface to the finer details of amplification and distribution in the chain beyond that.    Like code, to varying degrees the skilled and unskilled analyst, can find the clues and assimilate the artist’s ‘project’, contextualise it, shrink-wrap it in the polythene of cultural criticism, stepping towards or away from the artist in the process; gathering in the curious crowd or waving them away with flaming torches.

Where are we?  When are we?  Who are we?  Xqui is anonymous.  Reproduced in the words of others, Xqui defers to Twitter pronouncements for further information but the output there is mostly limited to links and details of distribution.  Xqui may be an individual but Xqui eschews the usual forms of manifestation that we have come to expect.  Indirectly, whilst out lumbering through the field, filing my recent reports, I have stumbled upon an underground, a faction of artists gaining increasing exposure for innovative ambient and experimental electronica – words and phrases which feel as clumsy and angular in the mouth as broken teeth – maybe such terms are apposite now to an old paradigm of creativity?  These artists are often anonymous, cartographers of soundscapes that are off-grid.  This is an anti-collective; they are not a tribe or a movement; they do not work together as such.  They form an association through a commonality in their music and the way in which abstraction is not limited to the art they produce, but extends to their own identity.  Abul Mogard shot down the GPS and undetected, other sonic sculptors have occupied this strangely liberating hinterland, where anything is possible.

On tracks such as Pharynx, this seems exactly where we are – this zone of new possibility, this freedom of expression.  From excerpts of ‘remote’ interviews and repeated listening to Lleisiau, this work seems replete with field recordings, samples of life at the interface, and yet any raw material has been treated through apps and instrumentation to warp, conceal and distort their original forms.  It is in such alchemy that the rich and atmospheric artistry of Xqui resides, for it appears that from the given ingredients available to all, something entirely new and unique has been created.

A mysterious breeze blows through tracks such as Porcelain and I find myself in lofty heights, surrounded by chimes, beautiful and crude, caked in dust.  In Present something pulsates below the surface and a sense of menace begins to pervade, eking its sinister progress onto subsequent track Snail.  Rhythms pulse, repeat, expand, contract, foreground, background, fade.  Where are we?

The feeling grows that the twenty first century has not yet arrived and others go further towards the more definite assertion that the twenty first century never came.  The hinterland articulated by Xqui is not nebulous to me, it is exactly the terrain that we find ourselves in now: the limbo, the darkness, laced with fleeting glimpses of beauty, a bumble bee repeatedly buzzing against the window pane, its six legs hanging beneath its oval body, unable to cross the threshold from one side to the other.

Lleisiau is Welsh for voices.  Fittingly, Xqui’s darkly compelling album ends with Shout: blurred, muffled, smeared across the other side of the glass.

You can find Xqui on Twitter @XquiMusic and on Bandcamp.