Here are a few vital recent releases from Ace (almost all on vinyl), probably one of the best reissue labels in the world. 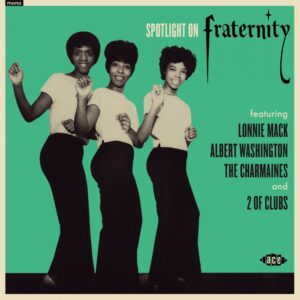 Compiled and noted by Mick Patrick, this is a tremendous 7-inch vinyl EP collection of the mid-1960s sound produced by the Cincinnati record label, Fraternity. Formed by Harry Carlson during 1954, independent label Fraternity predominately reflected the rather cautious tastes of its founder. However, this EP features the decidedly more audacious material from the label’s back catalogue.

First up is the late, renowned guitar hero Lonnie Mack (1941-2016) with his off the chain rockin’ and reelin’ 1964 instrumental ‘Sa-Ba-Hoola’. Mack worked first as a session player before his classic Fraternity instrumental singles ‘Memphis’ and ‘Wham!’, featuring his trademark bluesy-rock guitar solos, put him on the map for good.

Mack previously played with blues guitarist-vocalist Albert Washington, featured here singing the poignant ‘Jealous Woman’, his second single for Fraternity. Lonnie Mack and his band can also be heard on the flip side of this disc, providing dynamic backing for the phenomenal vocal group The Charmaines’ ‘Rocking Pneumonia’, their vigorous 1964 renovation of Huey Smith and The Clowns’ 1957 Ace New Orleans standard, ‘Rocking Pneumonia And The Boogie Woogie Flu’. This was one of the last recordings by The Charmaines for Fraternity, a classy and assertive exit.

Spotlight On Fraternity concludes in modish style with ‘Walk Tall Like A Man’ by another vocal group, 2 Of Clubs, comprising Linda Parrish and Patti Valentine. Having achieved much popularity around the Cincinnati club scene, the 2 Of Clubs enjoyed much success on Fraternity, where Linda Parrish’s husband Carl Edmondson was the house producer. The 2 Of Clubs’ 1967 offering included on Spotlight On Fraternity is typical of their output at the label: an apposite cover of R&B singer Verdelle Smith’s 1966 ‘Walk Tall Like A Man, written by producers Paul Vance and Lee Pockriss and first issued, unforgivably, as a B-side on Capitol Records.

Spotlight On Fraternity is a limited EP issue release, so be sure to snap it up fast. It won’t be around for long. 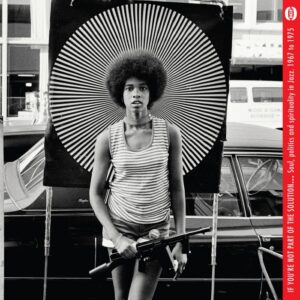 A lavish, gatefold double compilation album (also available on CD) follow up to Dean Rudland’s previously compiled and noted 2016 Celestial Blues – Cosmic, political and spiritual jazz 1970 to 1974 If You’re Not Part Of The Solution… matches and arguably succeeds its predecessor. As with the prior compilation, Rudland skilfully charts the musical landscape for jazz in the wake of the musical and social upheavals of the late 60s and early 70s. The innovations brought to the jazz form by the exploratory music of Pharoah Sanders, Archie Shepp, John Coltrane and Miles Davis, coupled with the influence of the ongoing, wasteful Vietnam War, inner-city riots in many American cities, student protests, the assassination of Dr Martin Luther King and an audience increasingly drifting towards soul, funk and rock can all be felt in the tracks Rudland has selected for this superb LP.

The Joe Henderson Quintet’s ‘If You’re Not Part Of The Solution, You’re Part Of The Problem’ appropriates a quote attributed to the early Black Panther leader Eldridge Cleaver (who actually stated: “There is no more neutrality in the world. You either have to be part of the solution, or you’re going to be part of the problem.”) and draws from a wellspring of James Brown funk for its thrilling 11-minute jazz odyssey, recorded live in 1970 at the Lighthouse Café, Hermosa Beach, California and vibraphonist Johnny Lytle’s 1972 cinematic soul-jazz, ‘Tawhid’. On ‘Black Feeling’ Johnny “Hammond” Smith draws post-bop into an irresistible jazzy yet propulsive soul stew, Eddie Jefferson supplies pertinent lyrics and vocals for his 1974 cover version of Miles Davis’ 1970 landmark composition ‘Bitches Brew’, the Clifford Jordan Quartet’s 1974 modal jazz pays explicit tribute to the intrepid musical explorer ‘John Coltrane’ and former Blue Note star, the shamefully underappreciated saxophonist and flute player Harold Vic evokes an African ambience on ‘H.N.I.C’. This atmosphere is directly channelled by Gary Bartz NTU Troop’s urgent and jubilant 1972 piece ‘Africans Unite’, while Funk Inc concludes proceedings with their dancefloor-friendly, vocal number ‘Let’s Make Peace And Stop The War’, a clear doffing of the cap to Marvin Gaye, taken from their 1972 album Chicken Lickin’.

With Kamasi Washington and other young musicians now drawing inspiration from the attitude to jazz evinced on these recordings, If You’re Not Part Of The Solution…. Soul, politics and spirituality in Jazz, 1967 to 1975 has a real contemporary resonance. This is definitely an essential purchase and already a strong contender for compilation album of the year. 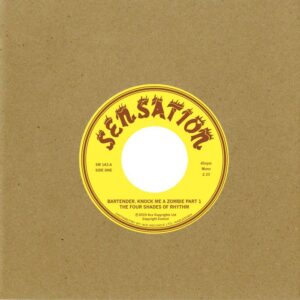 ‘Bartender, Knock Me A Zombie Part 1 & 2’, a jumping yet cool 1950 R&B number, is a fantastic single-only release. Not only is the single previously unreleased it also marks the first release by the Sensation label in 69 years.

This swinging celebration of the potentially lethal zombie cocktail was first recorded by Browley Guy on the Miracle label in 1949, but the Cleveland-located vocal group The Four Shades Of Rhythm, formed in 1940, really take the song to town. Incredibly, this prime piece of embryonic rock ‘n’ roll was only recently discovered by Ace’s intrepid co-founder Roger Armstrong while excavating the Sensation vaults. A copy of the recording found its way to DJ/singer Cerys Matthews, via her guest Armstrong, who immediately played the track on her acclaimed BBC Radio 6 Music Blues Show in July 2018. Such was the audience response to the track that Ace quickly issued this intoxicating classic as quickly as possible.

It’s encouraging that there is still an audience eager to imbibe such potent, swinging vintage R&B as ‘Bartender, Knock Me A Zombie Part 1 & 2’ proffered by the fabled The Four Shades Of Rhythm. Under no circumstances should you drive after playing both sides of this mighty 45. Undoubtedly, ‘Bartender, Knock Me A Zombie Part 1 & 2’ will become a longstanding favourite tune in any cocktail bar worthy of the name. Dig it. 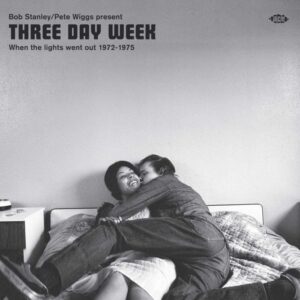 Here is yet another wonderful and imaginative thematic Ace compilation from Bob Stanley and Pete Wiggs of Saint Etienne. Issued as a cool, 28-track, clear vinyl gatefold double LP (also issued as a 26-track CD) Three Day Week – When the lights went out 1972-1975 definitely ranks with their recent classic Ace compilations Paris In The Spring and State Of The Union – The American Dream in Crisis 1967-1973.

The desperate period in UK recent history evoked here by Stanley and Wiggs’ selections is the doom and gloom attending the disastrous Tory Government of Prime Minister Ted Heath. As outlined in Bob Stanley’s engaging sleeve notes, the optimism that had built up through the 1960s in the UK, under the Labour Government of Harold Wilson, had evaporated by 1970 and the election of Heath. Much of Britain’s cities still bore the scars of World War II, the I.R.A’s bombing campaign in the UK intensified, inflation soared and a major oil shortage made a major impact upon most of the population. A wave of strikes by railway workers, dockers, civil servants and most importantly the miners, which led to the imposition of The Three Day Week in 1974 for three months and a wave of power cuts, eventually brought down the Heath government in 1974 and saw the re-election of Wilson’s Labour Government the following year.

Though the compilation begins with a demo version of The Strawbs’ ironic 1972 Number Two hit ‘Part Of The Union’ and closes with David Essex’s incredibly mournful title theme to his bleak 1974 pop star movie Stardust, the fact most of Stanley & Wiggs’ selections are single B-sides and obscure album cuts only adds to their wonderfully seedy yet affectionate evocation of the period. Numerous highlights include The Troggs’ seemingly channelling Iggy and The Stooges on their 1973 flipside ‘I’m On Fire’, The Kinks’ funky but forlorn 1975 LP cut ‘When Work Is Over’, Hawkwind’s inflammatory and hastily withdrawn 1973 proto-punk single ‘Urban Guerilla’ (“I’m an urban guerilla, I make bombs in my cellar”), Paul McCartney’s younger brother, under the pseudonym Mike McGear, sings the unembellished ‘Kill’ and Stud Leather freak-out with the frankly berserk ‘Cut Loose’. Then there is the former early 1960s teen idol Adam Faith’s heart-breaking 1974 ballad ‘In Your Life’ (which Bob Stanley correctly notes would not have been out of place on Big Star’s abiding third album), The Edgar Broughton Band’s cutting 1972 number, brimming with post-war disillusionment ,‘Homes For Heroes’, Pheon Bear’s crazed ‘War Against War’ and The Sutherland Bros Band original 1972 version of ‘Sailing’ – later a huge hit for Rod Stewart, with a more upbeat rendition in 1975.

The vinyl extra tracks are very special indeed. The Wilde family patriarch Marty demonstrates that this celebrated 1950s British rocker could still cut the mustard in 1974 with this glam rocking Magnet B-side, ’She’s A Mover’, co-written by Alvin Stardust’s main songwriter Peter ‘Love Me Love My Dog’ Shelley (Wilde’s then pre-teen son is also featured here with the thudding 1972 B-side ‘Hertfordshire Rock’). Meanwhile, The Troll Brothers mine a similar seam with the insistent, hand-clap driven stomper, ‘You Turn Me On’.

Terrifyingly, Three Day Week – When the lights went out 1972-1975 forms the perfect soundtrack for the present-day UK. This is definitely an additional Bob Stanley/Pete Wiggs compilation to treasure for the ages. 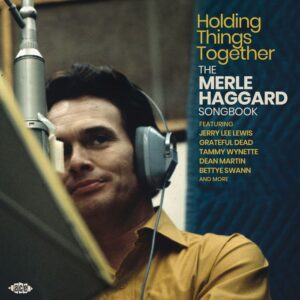 Compiled and noted by Tony Rounce, this CD only collection of 24 Merle Haggard covers by an eclectic array of artists is a fitting tribute to the prodigiously talented country music superstar, who died on 6th April 2016. The diversity of the musicians featured on Holding Things Together is a compliment to the quality of the compositions penned by the former San Quentin inmate (the 20-year-old Haggard witnessed Johnny Cash’s first prison show there on 1st January 1958) during his illustrious career which spanned over half a century.

Holding Things Together begins in high style, with a 1968 version of Haggard’s first major self-penned hit ‘Swinging Doors’ by living legend Jerry Lee Lewis. The stripped-back adaptation included here, first issued on a Bear Family compilation in late 1988 is debatably even better than the more polish, string-laden rendition featured on Lewis’ underrated 1971 LP, Would You Take Another Chance On Me?

Bettye Swann brings the blues to Haggard’s Bakersfield style country for her 1970 reading of ‘Just Because You Can’t Be Mine’ (originally included on The Hagg’s classic 1968 LP The Legend Of Bonnie And Clyde), The Flying Burrito Bros encapsulate the disillusionment at the core of the truck drivers anthem ‘White Line Fever’, Rat Packer Dean Martin makes the peripatetic lifestyle sound palatable on ‘I Take A Lot Of Pride In What I Am’ (a personal favourite Haggard cover version of the songwriter) while The Everly Brothers’ 1968 recording effortlessly evokes the yearning prison heartbreak of the 1967 hit ‘Sing Me Back Home’.