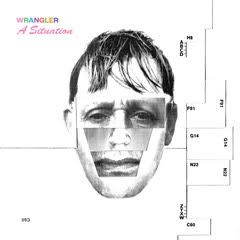 To celebrate the release the band have shared an extraordinary digital video for ‘Anthropocene’, a track about the collapse and fall of human civilisation.

Of the track Wrangler say, “We have left our mark on the world on which we walk. This is a soundtrack for the urban age. Sounds to lift us above the detritus which envelops and strangles us.” The video director Akiko Haruna adds, “The effect humans have on the planet is something that I am conscious of daily. Anthropocene shows our world, compressed onto the Wrangler logo. Over it looms three ugly heads, representing the human ego and how we might view ourselves as deities or Gods; the overseers of our world. Within the Wrangler world, we show a range of things happening in our current world such as sweatshops, deforestation, farming, fracking, sustainable energy, transport, etc. It was an immense privilege to work with 3D animator Ben Chan, who helped this world come to life. The situation is a serious one and I am very afraid, so to keep things bearable I like to force a slice of humour in everything. The space ship at the end is a little light relief from the situation; Escape. Realistically, I am much more for saving what we have and would rather not ditch our beautiful planet, but there’s nothing like a little space expedition to keep the options open.”

A Situation
1. Anthropocene
2. How To Start A Revolution
3. Machines Designed (To Eat You Up)
4. Mess
5. Knowledge Deficit
6. Rhizomatic
7. Anarchy Of Sound
8. Slide
9. A Situation
10. White Noise

A Situation will be released 28 February 2020 via Bella Union and is available to pre-order here: