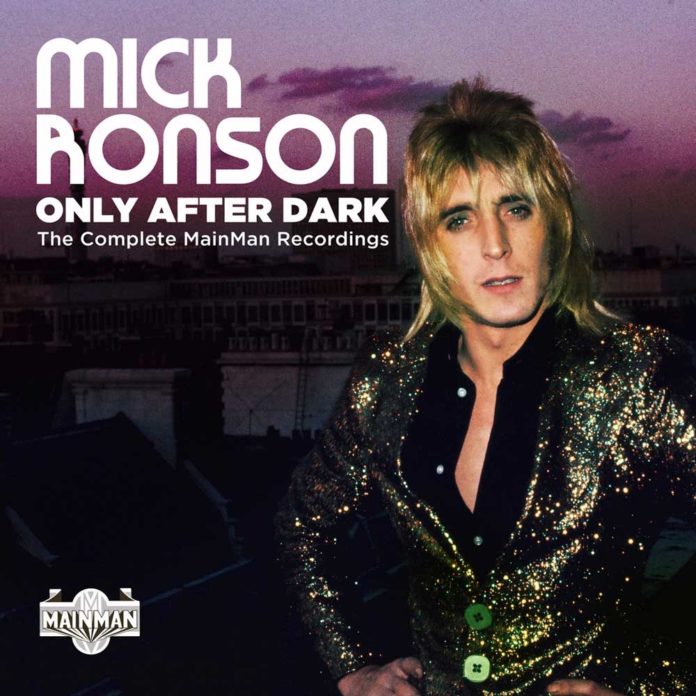 Mick Ronson – Only After Dark 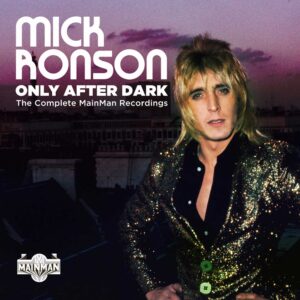 The complete Mainman recordings by virtuoso guitarist Mick Ronson, including the albums Slaughter On 10th Avenue And Play Don’t Worry plus two full discs of 1976 demos and rarities…Ian Canty hears a guitar legend and Spider From Mars cut loose solo, albeit reluctantly….

Mick Ronson, the Spider from Hull, a modest man blessed with a huge talent that helped to shape Glam Rock and in turn 70s music too. The man who laboured through the 60s with beat bands the Mariners, the Crestas and the Rats, before being recruited at the end of the decade by the latter’s drummer John Cambridge for a new London-based project. One that would involve a certain David Bowie, who was full of ideas but floundering under the weight of being seen as a bit of a “one hit wonder” after his 1969 smash Space Oddity. Within a few years DB would be the biggest star in the UK and Mick’s role in this as his on and off-stage foil was crucial.

After Bowie dramatically announced his “retirement” on stage at Hammersmith (which really meant that the Ziggy And The Spiders concept was to be rested), it appeared that some sort of panic beset the Mainman offices, fretting what to do now their number one asset was now out of commission for the meantime. Tony Defries opted to “promote from within” and nudged Mick Ronson unwillingly towards the spotlight. With Bowie supplying some songwriting input along with Scott Richardson (ex-SRC), early 1974 saw the release of his debut LP Slaughter On 10th Avenue.

Mick borrowed a bit from Annette Peacock on this debut LP, shaping his single version of Love Me Tender like her previous cover and including her I’m The One too. One thing that I feel must be said is that although many people have stated that Ronson wasn’t a natural frontman and really did not want such a role, he did possess a pretty darn good voice. To me he doesn’t sound like a sideman shoved centre stage on Slaughter On 10th Avenue at all. He sounds like he truly deserves to be there, which is confirmed by what is a really impressive debut album.

The standout track here for me is Only After Dark, which was memorably covered by the Human League on their 1980 second LP Travelogue. The unusual rhythmic set up and Mick’s shining guitar help polish a diamond of a song. Elsewhere the slowed down take of the title track, a hit for the Ventures in the 60s but from an original ballet score by Richard Rodgers, gives Mick a real chance to riff and he shines majestically.

As extras on this first disc there’s a stunning live version of Love Me Tender taped at the Rainbow in London which for me trumps the studio take easily. Leave My Heart Alone flies by with an ebullient charm and hearing his isolated guitar parts from Slaughter On 10th Avenue (the title track) is jaw-dropping. We also get two live takes of the same tune, with sparks really flying on the Hamburg version. The Teenage Magazine Interview has Ronson talking over excerpts from the LP in typically down to earth style and two 1979 live offerings of Angle No.9 (a studio version would later make it onto Play Don’t Worry and there is a demo take on disc three too) and the Shadows’ F.B.I. brings things to a close for this disc.

Play Don’t Worry, which followed a year later, was a decent enough rock/pop collection without quite living up to his debut. There are some nice moments, like the beautiful arrangement on Empty Bed (Io Me Ne Andrei) and the attractive theatrical glam romp of the LP’s single Billy Porter. The version of White Light/White Heat seems to have been developed out of a backing track that was mooted for Bowie’s Pin-Ups album, for some reason it didn’t make the cut but has a nice attack that fits the song to a t. Hazy Days has a real swagger to it and although Girl Can’t Help It has a rather pub rock sound Mick brings some of his trademark mighty guitar playing to shift it out of the ordinary.

Ultimately Play Don’t Worry didn’t make the same impact as Ronson’s debut and would be the last album that he released as a solo artist during his lifetime. A shame as it has some interesting ideas and sounds, plus Mick’s voice was used as well again. The bonus cuts on this disc include demos from December 1975, the flip side of the Billy Porter single Seven Days (another Annette Peacock song) and three album outtakes. For me one of the picks from these is (Is There) Life On Mars, a Bob Barnes song and nothing to do with David Bowie’s similar titled tune, obviously a bit of a nod to his recent past though. This was cut with Bob Dylan’s backing band Guam, with whom Ronson played in 1976. The soulful Pain In The Night sounds a little half-finished, which is a great shame as it was well worth being persevered with, a real groover.

The remaining two discs of this set are split into 1976 Sessions and Rarities. Just Like This (alias All Night Long) gets things started on the 1976 Sessions disc with aplomb, a fast and funky blues rocker. Although it is part of the demos disc, Takin’ A Train sounds like a live performance to me, but it is very good and there’s a pleasing contrast between the lighter musical setting for the verses and noisier sections. Hard Life is touching and sad – Mick basically straight-talking through some quality guitar work, including a slight instrumental nod to Ziggy.

There’s a couple of freewheeling zingers in the Faces/Stones mode in Is That Any Way and Hard Headed Woman and Angel No. 9 is also re-cut nicely. Perhaps the saddest track is I’ve Got No Secrets, which concludes wisely “got no secrets to take to my grave, just my music”. It is all we have left, but as this set makes clear, that music is some legacy.

The final disc here is split between five further demos from 1976 and a six song live set from Buffalo Century Theatre coming from the same year. The demos are alternative versions of tracks from the previous disc, but the ballad setting for Hard Life makes the song work even better and Takin’ The Train is given the laid back treatment nicely too. It is probably fitting that the last section of this compilation is live recordings, as Mick was clearly in his element just playing guitar on stage. Hey Grandma is fast moving and exciting and Junkie rocks pretty damn hard as well. The whole thing finishes with a blinding take of Just Like This, where the band surge through with an almost-Hawkwind like power.

Mick busied himself after parting with MainMan’s management by playing alongside and producing many performers, including contributing to the David Bowie album Black Tie/White Noise. This record was released in 1993, also sadly the year Mick died on 29 April from liver cancer. His grounded, down to earth mindset sharply contrasted with his out of this world guitar ability and it was clear from all the plaudits from his peers how loved he was. In his hometown a memorial stage was named in his honour was at Queen’s Gardens.

This is a lovely set, that brings a huge amount of Mick Ronson’s best solo work together. His fans will be delighted with the demos and live material and a good sleeve booklet puts his solo career into perspective. For me the big thing was hearing what a fine voice he had, presented in great clarity – though no-one is in any doubt about his abilities with a guitar in his hand (and a number of other musical instruments), the boy from Hull sure could sing. He may not have been a natural frontman, but he had a wealth of talents which are a joy to hear on Only After Dark.