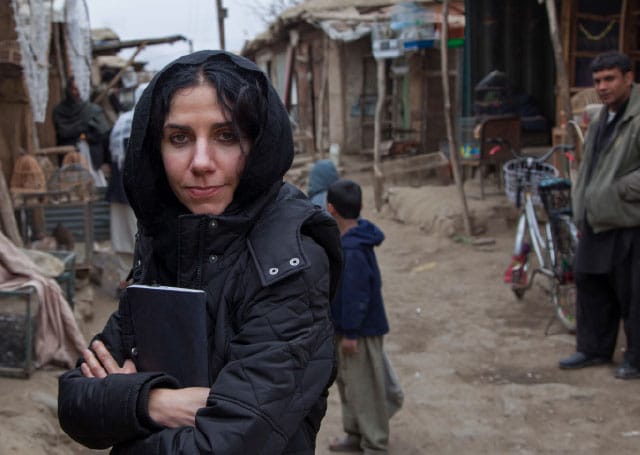 Cinema and streaming via MUBI

Currently garnering airplay with her version of Red Right Hand from the Peaky Blinders soundtrack, A Dog Called Money is the latest venture of the inimitable PJ Harvey, an impressionistic yet raw film created collaboratively with photographer Seamus Murphy.

Twenty seven years after hearing her raucously lo-fi debut album Dry on a C90 and gasping at the contours of the imaginative landscapes traversed in each urgent, unbridled track, PJ Harvey remains an artist known as much for her restless integrity as the music itself. Early reviews, even from those who appreciate Harvey’s music and attempt to contextualise A Dog Called Money (2019) within her ongoing artistic development, have been scathing. The film is accused of exploitation – of desperate situations and the disenfranchised people who find themselves in them – all fodder for the rich artist, setting lives of despair to music from the comfort of a bespoke studio in the capital. My heart sank upon reading them. Another widespread criticism is that we learn nothing of Polly and little of the places and people that populate each of photographer, director and cinematographer Seamus Murphy’s frames. I registered with MUBI and as the first scenes appeared on my screen I wondered if I was about to witness the first significant misstep of PJ Harvey’s career.

Throughout the film we see four different shades of Polly Jean: we see her – to some extent – in sustained clips as a performer behind the one-way glass windows in the purpose built Somerset House studio creating The Hope Six Demolition Project; we see her laughing and joking self-deprecatingly as she tunes up and collaborates with her band and producer; we see her striding alone through the rubble and streets of Kosovo, Afghanistan and Washington, notebook in hand or clasped to her chest like a soft shield, her dark eyes peering out from beneath her hood; we see her sitting in on a jam session in a foreign land with strangers and strange instruments, or clasping a hot drink between her hands in someone’s kitchen and smiling.  There is very little dialogue, Polly slips in and out of scenes, weightless: little is explained, exposition is limited, narration is indirect.

This is the age of the superlative documentary and music documentaries in particular are now subject to a premium levy in audience expectations in terms of quality, the criteria for which involves intimacy, insight into the artistic process usually informed by the deeply personal, a stitching together of archival footage and raw, candid moments that peak with revelation. Think MacDonald’s Whitney (2018), Amy (2015) or Searching for Sugarman (2012), perhaps even the beguiling gauntlet-running of American Interior (2014) where Gruff Rhys appears to switch places with the mysterious and elusive John Evans.

Set against this context it is understandable that A Dog Called Money might appear to fulfil few of the newly established criteria for contemporary music documentaries, yet as with everything PJ Harvey does, this is a unique and highly idiosyncratic presentation, despite its collaborative nature. Much of the strength of Harvey’s music has emanated from her approach to creating albums as cohesive works of art, each infused with variations on themes specific to that particular creative moment, each coloured with a tangible mood. Until her last two albums, both of which are more directly and overtly inspired by history, conflict and the politics of the dispossessed, considerable force of impact was due to the way in which her work – musically and in terms of narratives – appeared to be anchored in sources of inspiration outside the iterations of musical traditions currently en vogue. Mystery, originality and authenticity come to the fore as hallmarks of Harvey as an artist. This film is no exception.

A Dog Called Money does not sit and beg. It does not roll over and refuses a tickle of its tummy. It wanders diminutively through the vast empty atoms of bombed-out government buildings that stand like shattered mansions, but we do not see the interiors, we are presented with the surfaces – this is not reportage, these are impressions of a ravaged world. There are no patronising interviews but there are fragmented soliloquies, disjointed, going somewhere? Going nowhere. There is PJ Harvey, in a studio, recording those images, transforming them into sound, making thin sense, turning them into noise. It’s not easy, it’s almost impossible to simply not fail. The lines are fine between writing about other people’s realities, wanting to articulate realities beyond the frivolity of most pop, wanting to write something that endures and is more timeless musically, as she herself has claimed… and creating lines that are clunky, cringeworthy, resistant to melodic convention and the cool sensibilities of alternative music.

At every stage lyrically, musically and now visually in this haunting film – for film is exactly what this is as opposed to documentary – you can feel PJ Harvey stepping back, stepping out of view as the artist, as much as it is possible to do.  I imagine I hear her agonising over the lyrics, considering sanding their edges but ultimately having somehow the strength of belief and conviction of voice, artistically and physically, to ring out refrains like “they’re gonna build a Wamart he-re…”. It doesn’t work. It works.

I’ve often wondered where so much of PJ Harvey comes from and now in this darker, deeper, more serious later period, she herself disappears round every corner leaving glorious sound and image in her wake.

All words by Lee Ashworth. More writing by Lee Ashworth can be found at his author’s archive. Lee Ashworth is also on twitter as @Lee_Ashworth_ and has a website here. He is one half of The Manchester Art Authority