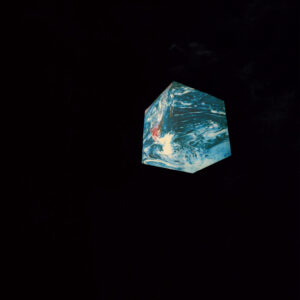 Anoyo is the follow up to Tim Hecker’s 2018 album Konoyo. Created during the same sessions with Japanese gagaku ensemble Tokyo Gakuso that birthed Konoyo, Anoyo is the skeletal flipside to its predecessors lushness. Simon Tucker reviews.

2018 saw the release of Tim Hecker’s Konoyo, an album made with the Japanese gagaku ensemble Tokyo Gakuso. Konoyo was a work very much inspired by grief and saw Hecker drawn towards elegance and restraint which led to it being an album that had a peaceful and humane centre. Recorded during the same sessions, Anoyo is the skeletal and harsher sister piece to Konoyo. Even at its most experimental and raw Konoyo dealt with grief in an almost comforting and protective way whereas Anoyo cuts open the raw nerves and allows the jagged nature of loss permeate throughout making this a far starker recording.

One main factor in Anoyo’s opposite soundscape to Konoyo is the muddying of the two contributing factors (Hecker / Tokyo Gakuso). Now and then we are presented with the ensemble far more central in the mix which allows for their off-kilter percussion and contorted rhythmic patterns to carry the tracks along with Hecker’s electronics and production manipulation painting the corners of the pieces, only now and then becoming more dominant like on the wonderful and dissonant closing track ‘You Never Were’ and ‘Into The Void’ where Hecker and Tokyo Gakuso play off each other with harsh but enthralling results.

Anoyo (which means “the world over there”) isn’t always brittle and jagged though with the meditative and looping opener ‘That World’ allowing the listener to centre themselves. The same goes for the hypnotic ambience of ‘Step Away From Konoyo’ which is a perfect example of an artist allowing themselves space and patience letting the tracks mood dictate where they take it next.

The double axis of Konoyo / Anoyo has comparisons in the similarly released Kid A / Amnesiac by Radiohead. Both allowed the first release to introduce listeners to their world and where their artistic muse was taken them with the follow up release then being a starker, colder and more jarring listen. Hecker and Tokyo Gakuso have with these two albums created a dialogue with anyone who has suffered loss in their lives. They have not shied away from the darker aspects of grief whilst also injecting positivity and hope. Anoyo is metal machine music created in tandem with a human heart and intellect. It is two cultures speaking about a universally experienced emotion with one tongue. It’s brittle nature helps carry the message and make its intent crystal clear and everyone involved deserves our applause.

Tim Hecker can be found via his website  and via Twitter where he tweets as @tim_hecker
All words by Simon Tucker. More writing by Simon on Louder Than War can be found at his author’s archive. You can also find Simon on twitter as @simontucker1979

January 22, 2020
0
The tracks are both light and dark, dissonant and melodic in equal nature to create different moods for the listener.
Read more

October 24, 2015
We use cookies to ensure that we give you the best experience on our website. If you continue to use this site we will assume that you are happy with it.Ok