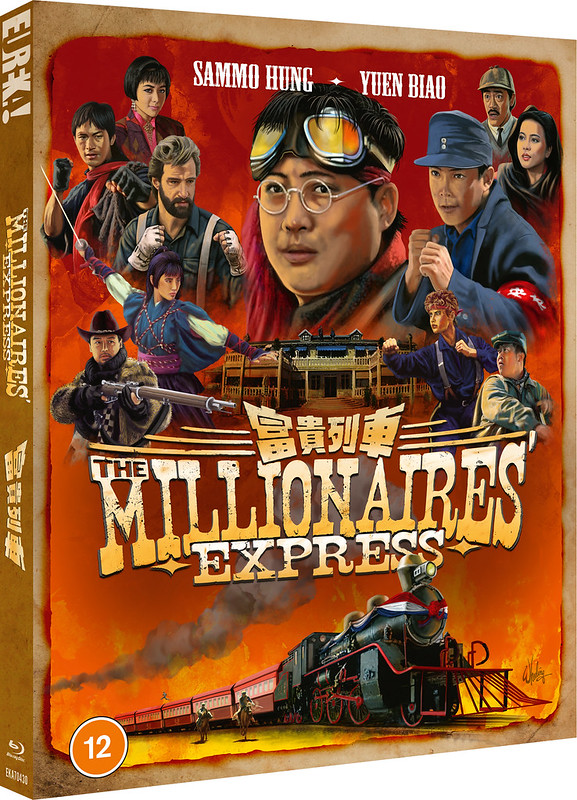 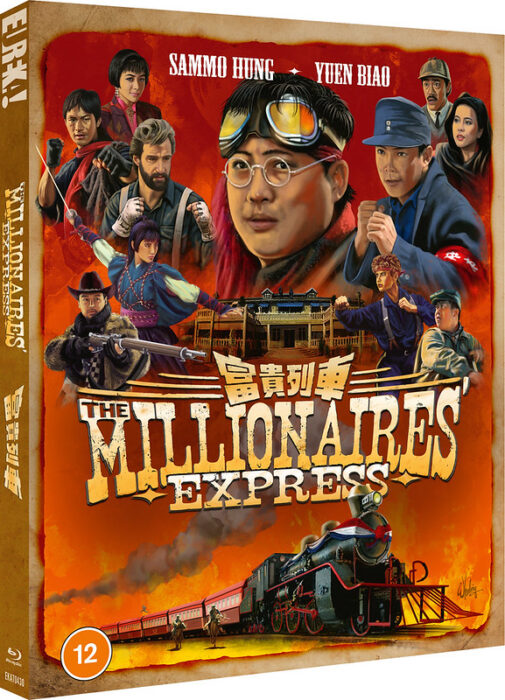 Jamie Havlin takes a look at an ambitious kung fu comedy ‘western’ from Sammo Hung with one of the finest ensemble casts ever assembled in Hong Kong cinema.

Sammo Hung is a big guy. And The Millionaires’ Express is a big movie, filmed in Hong Kong, Canada, Thailand and Macau, with a big cast that’s almost a who’s who of East Asian cinema of the time.

There’s Sammo himself and close buddy Yuen Biao (Shanghai Noon & Way Of The Dragon). Then there’s Rosamund Kwan (Once Upon a Time in China), Hwang Jang-lee (Drunken Master), James Tien (The Big Boss & Fist of Fury), Richard Ng and Eric Tsang (both My Lucky Stars). Jimmy Wang (One Armed Boxer) is featured all too briefly along with Shih Kien (Enter the Dragon), while Richard Norton and Cynthia Rothrock also team up for the first time. Jackie Chan was originally supposed to join the cast too but a falling out with Sammo put paid to that. You can’t have everything.

The plot concerns a new and luxurious train, its wealthy passengers and the various thieves who hope to rob it. These range from a bunch of incompetent eedjits through to a large gang of brigands and a more credible outfit led by a suave criminal mastermind.

Pursued from Russia – with anything but love – by a bounty hunter played by Kenny Bee, Chin Fong Tin (Sammo Hung) returns to his hometown of Hanshui. He fled there in disgrace years before and is unlikely to be welcomed back with open arms, but he hopes to make amends for his previous bad behaviour. And earn himself some money while he’s at it.

His methods of going about this are unconventional. Firstly, he sets up a bordello and buys over some local shops and businesses. Then, he blows up the Shanghai Express train track. This is to ensure that the derailed passengers will have to stay in Hanshui, the only town within miles, until the track is repaired. Once there he hopes they will spend, spend, spend and boost the town’s ailing economy. Of course, if some of that spending takes place at his bordello, so much the better.

It might take place mainly in China, but really The Millionaires’ Express is a western, though far from a standard western. It’s like Sergio Leone’s Once Upon a Time in the West directed by the Carry On team with added kung fu and some Buster Keaton style physical comedy.

Three of the movie’s many delights include a cheery Richard Ng trotting along the top of the moving train to surreptitiously visit his mistress in another compartment while a terrified wannabe robber almost falls off; a man disguising his distinctive body shape by wearing stilts during a stick up, and Ching’s inventive way of cooling down a Gatling gun.

Yes, it’s incredibly silly in a good way, with more time obviously spent on action scenes and stunts than on honing the finer elements of the plot or historical accuracy. Some of these stunts could legitimately be called death-defying. Yuen Biao’s cartwheel off the roof of a burning building made me doubt the existence of the job title of health and safety officer in 1980s Hong Kong cinema. Obviously filmed in a single take, he falls, lands, and immediately runs to a woman he has just saved and delivers a line of dialogue.

The finale is fantastic with some thrilling action. Maybe best of all is a brawl between Chin Fong Tin and Cynthia Rothrock’s unnamed character – and at a time when Hollywood is determined to showcase kickass females, you have to ask yourself how many of these new female stars possess a fraction of the fighting skills of Cynthia Rothrock? Yukari Ôshima impresses too as a Japanese swordswoman.

Okay, some of the CGI effects used in the early part of the movie look dreadful and some of the verbal comedy might fail to translate for some viewers in the West but The Millionaires’ Express is so outrageously entertaining that hardly matters.

It might just be the finest film that Sammo Hung has ever directed.

The Millionaires’ Express makes its UK debut on Blu-ray in this definitive edition as part of Eureka Classics. This release includes four versions of the film, all presented from brand new 2K restorations. The extras are extensive and include a new feature length audio commentary by Frank Djeng; another new audio commentary by Mike Leeder and Arne Venema (good to hear these guys again); a new interview with Cynthia Rothrock and archival interviews with Sammo Hung, Cynthia Rothrock and Yuen Biao; a limited edition booklet featuring new writing and a reversible poster featuring new and original artwork.