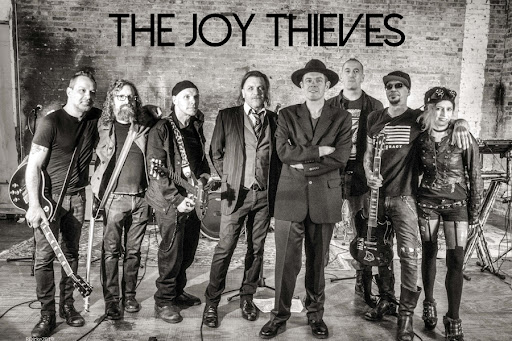 The Joy Thieves: the outrageous power out of the city of Chicago

It seems that within the newest American Parasite LP , Chicago-based industrial outfit The Joy Thieves has determined the secret of a perfect industrial record. At least, it feels like listening to their newest LP.

After the release of the debut EP – This Will Kill That , The Joy Thieves has been releasing single after single once again proofing: they are not a band. But a collective of thinkers.

Commenting on the first years behind what became The Joy Thieves, Dan Milligan, the drummer and the member of The Joy Thieves production team notices: “There were absolutely no systems in place.” Everything was brand new, according to Milligan. The collaborative work, as well as different aspects of the production were done remotely. That didn’t change since the release of This Will Kill That. As previously, the band has been putting some of their ready-pieces together, looking for the combinations that would work the best. As well as contributors. Whether these are like Killing Joke’s Big Paul Ferguson, or guitar-experimenter and the former member of Rollins Band – Chris Haskett and the Pegboy-members John and Joe Haggerty. Not even a half of the whole list.

The initial, collaborative nature of the project, and the approach of Dan Milligan brought him to work with Chris Connelly – at the very beginning of The Joy Thieves. “The first actual stranger I reached out to was Chris Connelly.” – fortunately for the future project, Connelly like the idea. And following the words of Dan: “Chris proceeded to kick ass on every last song we did together…”

As Milligan stresses out: “We noticed that there were a number of songs that Chris had sung that seemed to solidly reside in the punk realm. At that point, we were considering grouping those 5-6 songs together and releasing them as an EP.” – at the same time, Dan notices that American Parasite became the record where the band decided to further. What has started as an experiment devoted to the release of an EP soon led them releasing their first LP.

According to Dan, having 50 plus members contributing to American Parasite has given the band the possibility of collaboration. Quite punk-attitude, I guess. Dan confirms my suspicions:

“What would it sound like if The Joy Thieves were to write and record some punk songs?” – especially, with the people who’d add their meaning to the songs. Create some sort of stylistic optional distortion making the rhythm group sound like Fugazi or bringing anarchists’ tonalities of Crass. What it would turn to be like ?The answer, according to Dan is simple: “We decided to find out. And the result is “American Parasite.”

“The songs just kept coming…” – says Milligan adding: “The whole project suddenly felt VERY right. So, at that point I just asked Chris if he might be interested in expanding the scope of the project to be an entire full-length album, as opposed to the original idea of a short EP. He was ALL about it…”

The decision to focus on writing an LP led to the massive work from their end. There are less oxygen and spaces on American Parasite, as it was with their previous releases. The Joy Thieves achieve the complexity of sound layering different parts following the age-old canons of industrial. With it, more importantly is how they do this. Despite the amount of guest-artists contributed to the creation of American Parasite it’s more complex than any of Pigface recordings ( with an equal amount of featured-artists ). The only exception is two-minutes long piece – Transgressions. The combination of a growing tension with the lyricism. Following the words of Milligan: “Transgressions is different from the rest of the songs on American Parasite for a very specific reason. It is a cover. It was written by Scott-David Allen for his one-man darkwave band called A Covenant of Thorns. I heard this song while we were making American Parasite, and it really spoke to me…so I thought it might make an interesting addition to the album…”

I draw the parallel with the complexity of sound and their attitude. That’s where the word “punk” comes from. Dan totally understands me. He’s like one of those people I’ve met in my teens – while listening to The Sex Pistols and The Clast for the first time. At the same time, unlike myself, Dan was fortunate to spend many years living in Chicago – the city, that has been associating with industrial for almost 40 years now.

“From the new industrial scene happening at Wax Trax, to the DIY punk scene happening in the ‘burbs, to the 90’s alt rock boom of the 90’s…” – Milligancontinues speaking about Chicago – that has been like a magnet for the foundation of all sorts of styles and sub-styles: from punk-rock and industrial to house and techno. “I can’t tell you how many people have heard The Thieves and then said something like: “This sounds SO much like Chicago!” And I take a great amount of pride in that.”