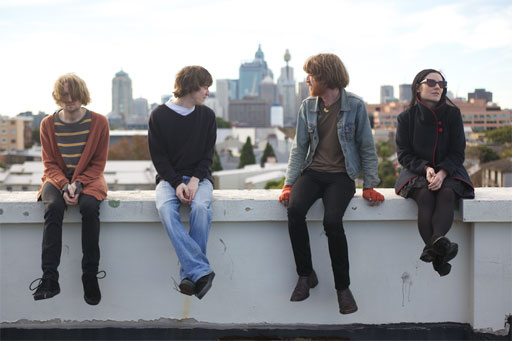 One of the band’s our Sydney correspondent Elena Wewer introduced us to in  her recent round up of her city’s scene was The Laurels. Here she chats to vocalist and guitarist Luke O’Farrell.

As the dust that The Laurels kicked up with the release of their debut album Plains settles to the ground after over a year of touring for the release, the Sydney psych act is moving on and looking to tackle new territory. Luke O’Farrell, vocalist and guitarist of the band, spoke to Louder Than War about their debut, Sydney’s music scene, and album number two.

The Laurels released their debut album, Plains, in 2012. The ten-track release, with its coloured, melodic approach to echoed, spacey psych rock, immediately caused waves both nationally and internationally, and placed The Laurels at the forefront of a live psych rock scene Sydney had been cultivating for years.

“Plains was meant to be a “studio” record, but at it’s core it’s still a live record,” O’Farrell begins.

“We rehearsed intensively to get the structures down and we tracked the bare bones of the songs live. Nothing is synced to a click track and there are little mistakes buried throughout the record – it gives the album a looser feel and it’s a more natural way for us to work together. We wanted to be more creative with our overdubs, so we chose to experiment more with textures and dynamics rather than just blasting people with a wall of sound like we do live.”

Though cohesive and brilliantly hazy as a whole, the tracks on Plains remain structured and subtly diverse – aspects of the album O’Farrell attributes to taking a step back from the band’s live approach to performance.

“We were looking to strip back the blanket of distortion so we could focus more on the songs themselves. There are still moments of our live sound on the record, but they’re just more considered,” he says.

“We also gave ourselves two weeks to record twelve songs, so we had to capture everything within the first few takes. It could have been a far more sonically aggressive record, but that wasn’t really the headspace we were in at the time of recording. There was a desire to create a more interesting and varied record rather than just giving people what they expected from us.”

And expectation had grown. After six years together and having released two EP’s, an album from The Laurels seemed long overdue, but the band had been kept busy playing Sydney’s live circuit.  Because of this, Sydney’s live music scene is something O’Farrell can reflect on with knowledge and measured consideration.

“When I first moved to Sydney the live scene was a lot stronger,” he admits.

“Most of our iconic venues are closing their doors which has been very problematic, but there’s still a collection of awesome people making amazing music. Blogs like Skydreams and labels like Octopus Pi help shed light on some of the lesser known acts. There are also a lot of DIY venues popping up that are a huge improvement on the seedy venues left in Kings Cross.”

Although Sydney’s live music scene may be struggling now, O’Farrell remembers how things used to be.

“When we first started, there was already a community of bands like The Dolly Rocker Movement and The Astral Kaleidoscope who had the same ideas about music as us. That’s why there has always been so much cross pollination, there’s a massive collective of musicians who all have a mutual respect for each other and a desire to collaborate.”

It was this atmosphere of solidarity and collaboration in Sydney’s suburbs that led to O’Farrell working on fellow Inner West band The Black Ryder’s 2009 debut album Buy The Ticket, Take The Ride.

“I met Scott [Von Ryper] and Aimee [Nash] in 2007 and we became good friends. Kate [Wilson, The Laurels’ drummer] had already been drumming with the band and I joined as a live guitarist soon after,” O’Farrell says.

“It’s essentially just Scott and Aimee on the record. They play most of the instrumentation themselves – I play guitar on one song and they also have a bunch of other guests contributing to the record as well. They’ve been living in LA for a few years now so there aren’t plans to collaborate any further at this point.”

But unlike The Black Ryder and countless other Australian bands, The Laurels have no plans to head overseas.

“I can’t imagine living anywhere except Australia! I love it here and I wouldn’t leave my family and friends behind for the sake of cracking into a market,” O’Farrell says.

“That’s never been a priority for the band, we just focus on making music that we enjoy. Which is probably why we all still work day jobs after seven years together…”

Despite this geographical and occupational stability, The Laurels have had no trouble attracting attention in the US, South America, and the UK, where, most recently, their colour-drenched, guitar-sprawling single Tidal Wave was chosen as the opening track to the 5th instalment of indie label Northern Star Records’ acclaimed Psychedelica series.

“We’ve been in touch with Northern Star since they released the first volume [of Psychedelica],” O’Farrell explains.

“There’s another label called Psyilocybin Sounds based in the UK that put out several of our early demos on their compilations as well. Both labels manage to get awesome lineups together for their releases and we’re honoured to be a part of that movement.”

“Those are the bands we bonded over when we first started The Laurels and we still listen to them today – their influence is always going to shine through!”

As well as being naturally affected by his modern psych rock revival contemporaries (leading to comparisons to, as O’Farrell says, “pretty much all the bands on Creation’s roster”), O’Farrell admits to a much more renowned influence.

“The Beatles are still my biggest influence. They have a grasp on melody that’s intrigued me since I first heard them as a kid,” he says.

But his influences aren’t all rock-based – O’Farrell has found scope and inspiration through his immersion in hip hop in recent years.

“Through learning about the style of production and studying the art of sampling, I’ve also discovered a lot of composers and soundtrack work that’s inspired me to compose music in new ways as well,” he says, though, “The record I’ve listened to the most over the past year has been Portishead’s Third. I dream of making a record that good one day…”

But speaking on the topic of a new album of their own, O’Farrell says that there are no absolutes which The Laurels can share, though the band has contemplated the new album’s theoretical form already.

“I think we all agree that we don’t want to repeat ourselves, ” O’Farrell says.

“We want to do something different with each release and to continue progressing sonically. It doesn’t have to be drastically different from what we’ve done in the past, it’s nice to have a sense of continuity. We haven’t discussed exactly where we want to go next, but once everyone starts contributing ideas we will have a much clearer idea of where we’re headed.

“The most important thing for me with this next record is not to rush anything. I’d like to let it all unfold naturally and give the songs the time they need to develop. We’re going to continue experimenting with sounds at home and then we’ll head back into the studio when we’re feeling inspired. It could take a year, it could take ten!”

Plains was released in 2012 on Rice is Nice records.

The Laurels can be found on Facebook and Bandcamp.

All words by Elena Wewer. Read more articles from her on her Louder Than War author profile.