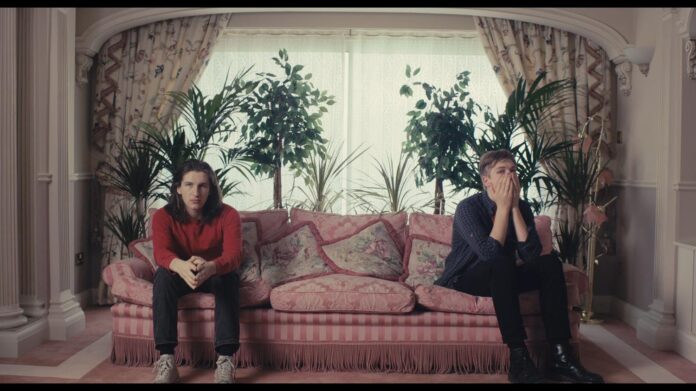 They’re the Derbyshire brothers who’ve drove full speed into the UK music scene with nihilism as the selected gear. Drummer, Rory Loveless, reveals plans for 2014 and why UK festivals are like Pleasure Island…

Loveless by name, loveless by nature? Take a look at Drenge’s blend of sardonic, brutal phonics and the content of their next single Fuckabout. The song lyrics state, ‘I don’t give a fuck about people in love, they don’t piss me off, they just make me give up’. Once you gaze past the adversary what you actually see is something that Rory Loveless, one half of one of the UK’s most exciting new bands, sees as a purely ‘common’ feeling. And he’s kind of right. It’s this blend of acerbic honesty and resonation that have placed Drenge on a pedestal that most bands never reach. This pedestal in particular has sent them all the way to the Big Apple.

It’s easy to imagine two young guys from Castleton enthralled by what New York has to offer and even easier to imagine them among the cardboard cut out New York stereotypes. As Rory himself noted – ‘you’re being bombarded with all these typical situations, big Italian gangster types shouting across a restaurant, small basement Jazz clubs, uber hip Brooklyn warehouse parties’ with the end result leaving him ‘giddy as hell’.

It’s not going to be the brothers last time in America either as the US festival circuit is something that Drenge are going to be no stranger to this year with one in particular causing more waves than the rest – SXSW. I ask Rory how he feels on dealing with the illustrious reputation attached to Austin’s huge, annual festival. ‘Whenever it comes up in conversation with people who’ve been there, they’ll always let out a huge sigh that almost covers their mixed emotions, their highs and lows and plain weird experiences they’ve had there. I read that post by Zach and thought we’d never agree to do it, it seemed too stressful, too corporate and expensive to bother with little concern for the artists, but I’d rather we played it and learnt that first hand than miss out on what could be valuable and fun’. He’s referencing the Tumblr post made by DIIV frontman Zachary Cole Smith who slammed the event branding it ‘bullshit’ and claiming that ‘the music comes last’ with ‘corporate money everywhere’. Not exactly something closely related to Drenge, who shrugged off the fact that they were namechecked in former MP Tom Watson’s resignation letter and have personally only ever attended Leeds Festival, a shrine for all festival goers.

Rory recalls that all too familiar affair in which your ‘friends are showing everybody how well they can roll cigarettes with a total lack of interest for the bands’.  He likens the festivals to ‘apocalyptic uprisings’ which isn’t far removed from the truth if you consider huge explosions, screams and flocks of seagulls flying from camp to camp as oracular. ‘I felt like I was on Pleasure Island from Pinocchio. Arcade Fire at Leeds was one of the best shows I’ve ever seen. I saw Girls and one of LCD Soundsystem‘s last shows too, both of which I didn’t appreciate as much as I should have’.

Talk turns to plans for 2014 including the release of Fuckabout, a slight departure from the duo’s usual ear pummelling sound. ‘I guess it shows a different side to us. It’s always been one of our favourites – I love the idea of a song being a fuckabout, it reminds me of Ginger Baker’s song Do What You Like which is pretty much built around a drum solo’.

It seems only natural that Rory would take note of Ginger Baker, the standard prototype of a classic drummer, but it seems the developmental sound that shaped him musically was a lot more fast paced and relevant to a young guy growing up in the early 2000s. He cites ‘Blink 182, Sum 41, The Strokes and The Libertines‘ as inspirations along with the garage explosion bursting at the seams of the US including The Smith Westerns and The Black Lips. More notably he mentions local Sheffield band Wet Nuns (RIP) as an influence. This surprises me as unlike the burgeoning B-Town scene, Drenge seem to be a band who have uprooted themselves from their hometown and are no longer linked to a postcode or a sub genre.  Instead the two piece seem to be slotting into existing genres everywhere they travel – ‘There’s a great scene we’re with based around the Tye Die Tapes (where we wrote a lot of the album) and The Audacious Art Experiment spaces, they put cool bands on regularly and release sweet, sweet records. There’s a cool scene going on full of bands without a strict overseeing genre, just likeminded people. We’ve been lucky enough to play with bands like Best Friends, Blood Sport, Collider, Blessa, Seize the Chair, but we see less and less the more we’re away.’

As Drenge embark on a UK tour this month starting in Birmingham, Rory seems excited at the prospect of going on his first and biggest headline venture. ‘We’re going to push ourselves even more, maybe try out some new songs, and see what happens. I don’t know what to expect myself.’ After being given a taster of the effects of a full scale tour with other 2013 climbers Peace, Rory looks back on the affair with fond memories. ‘They’re so much fun to hang around with, that’s been one of my favourite tours. We’re a bit heavier than them but it worked, and the crowd went crazy most nights. It was nice playing larger venues for a change, and we were all doing things that were new for us. One night we sort of got them in trouble when we snook into a swimming pool after a show. I didn’t think they’d be up for it but it was too good to miss out on – all the slides were still on!’

It was, during this very tour with Peace, that Eoin went down offstage to a girl on her smartphone and told her off mid set, a move that embarrassed Rory. ‘We probably weren’t even the reason she was there’, he brushes off. However, it brings up that heated argument regarding the usage of phones at a gig. Many artists have waded in on the debate, including Johnny Marr, saying it’s a barrier between artist and audience. It’s something that Drenge have been pretty much against since day one. Rory admits he sees it as an incentive to work even harder on stage. ‘There are people who would snap their phone in two to be at the front for the whole show rather than have their view blocked by somebody who isn’t bothered. What if the show’s sold out and people have missed out on tickets? I think it’s your duty to have the best time possible, and a phone video of the gig the next day is not going to feel the same as actually being there’.

For a two piece, Drenge make enough racket for four, but Rory stresses to me that aesthetically it’s not the sonics that matter within the music but more the songs themselves. ‘We’re trying out parts here and there but our songs shouldn’t be defined by our instruments, and I want to be free to do what we want’.

And who’s seriously going to stop them?

All words by Harley Cassidy. Harley’s author’s archive, where you can find more writing by her, is here.