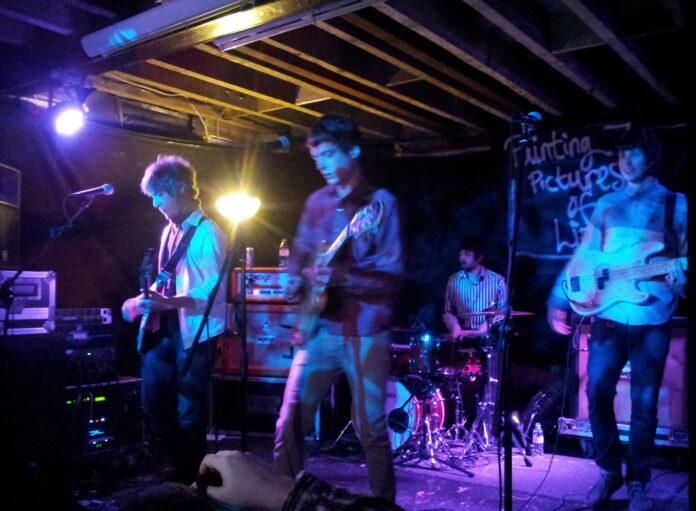 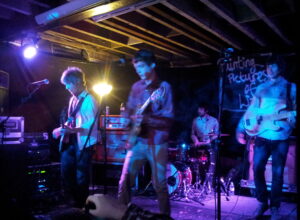 After a near sell out run of four shows at Manchester Kraak Gallery, Twisted Wheel announced that they were adding a final gig to the series – this one, however, would be a little different. “Playing both our albums, Twisted Wheel and Do It Again, track by track, in order. Live. Every song. No support, just us.” An adventurous move, even for a band with a notoriously devoted fan-base… Louder Than War’s Alana Turk went along to check it out.

The lights are low and the background music is dimmed, replaced instead with the now classic, eager chants of “Wheeeeeee-el! Wheeeeeee-el!”. Twisted Wheel enter the small stage and hastily get the show on the road with self-titled debut album opener Lucy The Castle. The select crowd here tonight are clearly up for it and the floor begins to vibrate with the first strum of a guitar. Their sound is spot on, loud but not overbearing as can sometimes be the case in small, enclosed venues.

A form of raw energy cuts through the atmosphere as the foursome strikes up She’s A Weapon – a fierce track that provides an abundance of punk-esque aggression through both guitars and vocals. As the drum beat of We Are Us kicks in, the room is in a hurdling frenzy and drinks fly above in all directions, proving it to be the crowd favourite so far.

Blood and sweat continue to pump for the duration of Oh What Have You Done?. Slower number Strife, on the other hand, allows fans to preserve their physical energy and provides one of the most profound singalongs of the evening.

One Night On The Street is a highlight of the set, with its added interlude of The Beatles’ Day Tripper and an electric drum solo from Twisted Wheel’s own Keith Moon – Blair Murray. He, along with guitarist Adam Birchall and bassist Max Lees, temporarily exit, leaving frontman Jonny Brown alone with his guitar. As he begins to play Let Them Have It All – one of my personal favourites – it strikes me as a little odd to perform it in this way when it has so much potential as a live track. Nevertheless, it makes for an interesting take and is enjoyable all the same. The Wheel, however, rarely disappoint and the rest of the band reappear to join in with the build up before the last verse, resulting in a resounding finish.

Bad Candy gets the crowd riled up once more, ready for another one of Twisted Wheel’s usual climactic tracks, You Stole The Sun (see above). The opening lyrics trigger my friend’s memory to another gig we attended, as she turns to me and says “I remember everyone going mental to this one!” – and tonight is no different, as we become consumed in a bounding fever.

Solo once again, Brown performs a captivating rendition of Bouncing Bomb with many a lone ranger echoing the candid lyrics straight back at him. The full band then round off the first half of the evening with the final track of their first album,  What’s Your Name?

After a 15 minute interval the crowd resume their positions, eagerly awaiting Twisted Wheel’s return to the stage. Not needing any encouragement to get back into the groove, they stamp along to the steady build up before the explosive opening of Poppi Love from second album Do It Again.

Honey Girl and Ride (see below) both appear to be enjoyed more by the female members of the audience, particularly the latter as Brown charismatically dedicates “This one’s for all the lovely ladies in the house”.

Sweet 19 and Postman are glad reminders of all memorable Twisted Wheel gigs. The sound, the crowd, the energy, the drench of beer and sweat – all of the best bits rolled into one. Spliced between the two is another solo performance by Brown – Do It Again. “I’ve never played it on my own before” states Brown, but you would never have guessed. The song works strangely well with just one guitar and vocal.

“Right, it’s all gone to pot now…” Brown exclaims, by the time we reach the second album closer. Whatever the mishap, he quickly recovers and goes on to nail his final solo number Double Yellow Lines, which finds the dedicated fans leading the chorus with equal power and passion. The band finish their set by treating the crowd to a bonus track – the unreleased and old live favourite, Tell The World. A great way to round off the night, avid fans lovingly dance and clap along before erupting into an uproar of cheers and chanting.

As is often the case with album tracklisting, tonight’s gig feels accomplished and well put together. This latest Twisted Wheel line up have clearly worked to develop their delivery, producing a fuller sound as a quartet. Brown, the only original member, has arranged a solid group to keep the wheel spinning. Undeniably powerful, they are a talented bunch who can really play and have an impressive following who can’t help but lap up the raw energy and spit it back out at them.